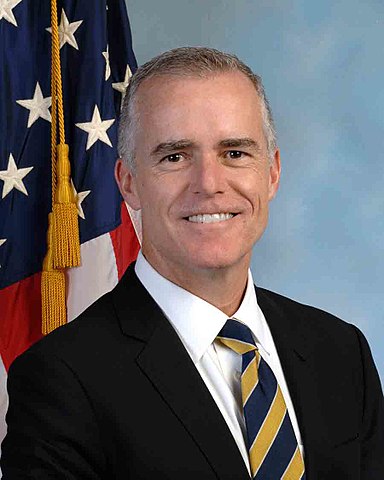 After much media hype and online snippets the prime time CBS News interview of Andrew McCabe finally aired on 2.17.19. It was a well-choreographed editorial hit-piece masquerading as journalism worthy of study by any legitimate journalism school if any still exist.

McCabe and Pelley do their dance of deception

60 Minutes correspondent Scott Pelley interviewed McCabe for the show. Pelley handled McCabe with the deference, tenderness, and soulfulness of a dance partner, completely inappropriate for interviewing the disgraced former acting head of the FBI involved in an unprecedented coup attempt against President Donald J. Trump. CBS entertained America with their well-rehearsed dance sequence.

The stage is set for two. Pelley’s gentle voice leads McCabe as they tango around the political dance floor justifying motivations for removing the president. A dip here, a dramatic pause there.

McCabe, dressed in his best red white and blue dance costume takes the lead and reveals that he ordered an investigation into whether President Trump obstructed justice by firing FBI director James Comey. Dancing McCabe’s Tango Walks naturally curve to the left as he claims he initiated the probe to safeguard and document the ongoing investigations into Russian interference in the 2016 election so they could “not be closed or vanish in the night without a trace.”

Pelley turns and moves his partner in a different direction. McCabe follows for a Reverse Slip Pivot and in a staggering admission that has gone viral on the Internet but being virtually ignored by the mainstream media, McCabe describes how the Justice Department considered invoking the 25th Amendment to remove President Trump from office.

McCabe admits to attempting a coup

Section Four of the 25th Amendment allows the removal of a sitting US president if the vice-president and a majority of the Cabinet declare him unable to discharge the powers and duties of his office. There was actually DOJ speculation regarding which tango dancers would sign up for the program and how it could be accomplished.

Pelley slows McCabe in the slow, slow, quick, quick, slow tango pattern and McCabe responds. “Rod raised the issue and discussed it with me in the context of thinking about how many other cabinet officials might support such an effort.”

McCabe quickens and leans in close to Pelley for an Outside Swivel and reveals that deputy attorney general Rod Rosenstein, another gifted tango dancer, even offered to wear a wire into the White House to record potentially incriminating conversations with the president. WHAT??? There are rules in tango!

Rod Rosenstein should be disqualified.

Outrage from a law professor

Law professor and competition judge Alan Dershowitz mocked the DOJ suggesting they must be watching the TV drama House of Cards instead of reading the Constitution. On 2.15.19 Dershowitz speaks unequivocally about the 25th Amendment to Fox News:

The Constitution is clear as can be. The 25th Amendment is applicable only if you’re incapacitated. It’s not a substitute for impeachment, it’s not suitable for an election and if Rod Rosenstein actually thought about and suggested wiring the president, invoking the 25th Amendment, he should be fired before he has the opportunity to resign. He should be disgraced.

But there is a problem.

Media complicity in the coup attempt

The Tango Championships are sponsored by the Deep State and their media outlets CNN, CBS, ABC, NBC, and MSNBC so the dancing continues on mainstream media.

The Pelley/McCabe tango partnership is now competing in the finals of the Worldwide Tango Championships and must be seen in context. Other dancers include James Comey, Robert Mueller, Rod Rosenstein, Bruce Ohr, Nellie Ohr, Peter Strzok, Lisa Page, Chris Wray, Nancy Pelosi, Chuck Schumer, and senior tango dancers competing in the elder division James Clapper and John Brennan who have been with the Tango Association since its inception.

The Grand Prize winners receive lifetime achievement awards in political tango for planning and pulling off the most seditious plot in American history – the coup against a sitting president. The key to the coup and the cover-up is its context.

The Steele dossier: a clear fabrication

The foundation of the Russian investigation was the infamous 2016 Steele dossier. Christopher Steele, a British tango dancer and former head of the Russia desk for British Intelligence MI6, wrote the dossier for the private investigative firm Fusion GPS. The dossier was opposition research bought by Hillary Clinton and the Democratic National Committee for the purpose of smearing and delegitimizing candidate Trump.

The Steele dossier was never legitimate intelligence but it was deceitfully used to acquire the FISA warrants required to spy on the Trump campaign. Robert Mueller, another world-class tango dancer, is now using it to cover-up and legitimize the seditious coup attempt against President Trump.

Spygate is the political dance routine of world champion tango partners Barack Obama and Hillary Clinton first used in 2016 to delegitimize candidate Trump and now being used in the coup attempt against President Trump. Scott Pelley’s tango dance with McCabe was just more steps in the dance.