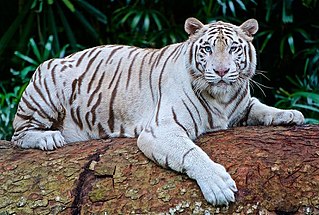 Siegfried & Roy were illusionists whose famous Las Vegas act with Bengal tigers thrilled audiences at the Mirage Resort and Casino for thirteen years. Their daredevil performance was predicated on the technique of “affection conditioning” in which Roy bonded rather than trained the animals. The method required raising tiger cubs from birth and sleeping with them until they were a year old. Roy described the experience saying, “When an animal gives you its trust, you feel like you have been given the most beautiful gift in the world.”

On October 3, 2003 Roy Cohn’s prized cat, 380 lb Montecore, sunk its teeth into Roy’s neck and dragged him offstage before a horrified audience.

Roy faithfully insisted that Montecore was just trying to protect him. Other experts had a more realistic view of the attack. Kay Rosaire, head of the Big Cat Encounter in Florida at the time said, “They’re predators, so who can really know what goes on in their minds? Even though they are raised in captivity and they love us, sometimes their natural instincts just take over.”

Trying to tame the wildness of a Bengal tiger for entertainment denies the predatory nature of the animal. So it is with the Muslim Brotherhood in America.

Siegfried and Roy charmed audiences with their great illusions using the secret trickery of magicians and artful sleight of hand. The Muslim Brotherhood’s signature trickery and sleight of hand is called taqiyya – lying in the service of Islam. Taqiyya is a deceitful strategy used to promote the illusion of peace as it deflects public attention away from the Islamist goals of world domination and imposition of sharia law.

Predation: what the Muslim Brotherhood does

Montecore and the Muslim Brotherhood have much in common. Both predatory in nature, both presented to the public as tamed and safe to be around by illusionists, both eventually discarding any pretense of restraint and viciously attacking their faithful handlers.

The Muslim Brotherhood is the predatory political arm of the Islamist effort to “Make America Muslim.” In its 1991 Explanatory Memorandum the Brotherhood’s objectives and methods are documented with precision. The Democratic Party of Jihad has fully embraced the Muslim Brotherhood and denied its predatory nature because the Council on American-Islamic Relations (CAIR) founder Nihad Awad is such a successful illusionist.

By its own definition the Muslim Brotherhood is a predatory organization that will eventually turn on the foolish leftist Democrats who currently support them – it is inevitable because like Montecore, their predatory nature seeks dominance.

Trying to dominate the world since 1928

Hassan al-Banna the Egyptian scholar who founded the Muslim Brotherhood in 1928 expressed its predatory nature saying, “It is the nature of Islam to dominate, not to be dominated, to impose its law on all nations and to extend its power to the entire planet.”

In 1991 the Muslim Brotherhood Explanatory memorandum expresses its unchanged predatory nature stating unapologetically, “The process of settlement is a ‘Civilization-Jihadist Process’ with all the words mean. The Ikwan (Muslim Brotherhood) must understand that their work in America is a kind of grand jihad in eliminating and destroying Western civilization from within and ’sabotaging’ its miserable house by their hands and by the hands of the believers.”

Islam is a replacement religion that fully intends to conquer the West by converting the West to Islam. To Westerners such claims seem wildly hyperbolic and unworthy of serious consideration. Why?

Perhaps the West, and particularly America, has been lulled into a deep and dangerous sleep by an unparalleled period of ordered liberty and now takes its freedom for granted. It is simply unthinkable for most Americans that anyone would seriously attack them. Americans have been indoctrinated with affection conditioning by naive leftists and, like Sigfried & Roy, have forgotten the predatory nature of the beast.

The Muslim Brotherhood and its propaganda arm CAIR are the political voices of Islamist supremacy in America. Their primary objective to establish a worldwide caliphate requires making America Muslim. To accomplish this magic trick they need gifted illusionists like CAIR founder Nihad Awad to beguile American audiences into believing that he comes in peace.

Raymond Ibrahim of the Middle East Forum explains the language of Islam and the dilemma it poses for the West:

Whereas it may be more appropriate to talk of ‘war and peace’ as natural corollaries in a Western context, when discussing Islam, it is more accurate to talk of ‘war and deceit.’ For, from an Islamic point of view, times of peace – that is, whenever Islam is significantly weaker than its infidel rivals – are times of feigned peace and pretense, in a word, taqiyya.

Central to understanding taqiyya and the principles of deceit is Mohammed’s famous utterance, “War is deceit.”

The world is still at war

According to Islam the world is still at war so deception is fully endorsed and this has extreme implications for politics in America. Sharia compliant Muslim Brotherhood associates Reps. Ilhan Omar and Rashida Tlaib are now sitting members of Congress. In an astounding demonstration of appeasement to the most radical members of the Democrat party, Nancy Pelosi appointed Omar to the Committee on Foreign Affairs which oversees America’s international interests, and appointed Tlaib to the Oversight and Reform committee. These appointments are a staggering threat to national security and a foolhardy denial of the predatory nature of the Muslim Brotherhood.

Reps. Omar and Tlaib’s sharia inspired political objectives require the ongoing illusionist act of taqiyya as they vote in Congress to further their Islamist goals.

Siegfried & Roy forgot the predatory nature of Bengal tigers and their audience was stunned by the ferocious attack that almost killed Roy Cohn. If Americans forget the predatory nature of the Muslim Brotherhood and its operatives inside America, we will be similarly stunned by the equally predictable attacks on America by Congressional Reps. Omar and Tlaib. Attacks are inevitable with predators.

Readers can find other relevant articles by Ms. Goudsmit here:

The featured photograph is of a white tiger in captivity. The original photographer released it into the public domain in all jurisdictions worldwide.

If Our House Be On Fire

Matteo Salvini – Many Enemies, Much Honor