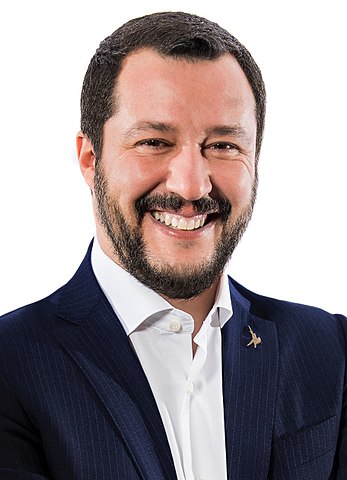 Hello, this is Darrell Castle with today’s Castle Report. Today I will be talking about Matteo Salvini, the deputy prime minister of Italy, and the extraordinary courage he has shown in his efforts to curtail illegal migration into Italy primarily from Africa and the Middle East. The title of this Report is a recent quote from Mr. Salvini and it reflects his approach to his work. He believes that his enemies give him a chance to honor his promises and his love of Italy and the Italian people.

Matteo Salvini and the problem he faces head-on

Let’s take a look at who this man is and how he came to be in a position of such importance to Italy and to the world today. He is important among the world’s politicians because against overwhelming opposition he stuck his finger in the dike and is holding back migration, primarily Muslim migration, into Italy. Much to the chagrin of globalists such as George Soros who pays for much of the migration. I know that the migration, especially from Africa, is funded by Mr. Soros’ Open Society Foundation because he admits it, and even describes how and how much money he allocates to it. Matteo Salvini has demonstrated that it can be stopped, despite the opposition, if one has enough courage to do what it takes and what he promised to do if elected.

Matteo Salvini is 46 years old, divorced with two children. In June 2018, he was elected Deputy Prime Minister of Italy and Minister of the Interior. He has also served as a senator in the Italian Senate and as a member of the Italian Parliament. He is usually described as “far right” by the press because he is very critical of the European Union, especially the Euro. The primary reason he is usually described as “far right or extreme right” is because he opposes illegal immigration into Italy and into Europe. He apparently believes that illegal immigration is actually illegal and should be stopped.

He campaigned for office and came to power in the same wave of populist sentiment that brought the Presidency of the United States to Donald Trump. He is a populist who was elected out of similar sentiments as Mr. Trump. The politicians, who run the United States, and the European Union including Italy, are very rarely attuned to the will of their people. The result is that periodically people who live in democratic societies where they are empowered to elect leaders sometimes go off the reservation and do something the powers that be do not want them to do.

I have always argued that Mr. Trump’s election was important because of what it represents rather than who he is. It represents the people rising up with whatever feeble power they have left to resist their global overlords who always seem to know what is best for them. In Italy, Matteo Salvini saw what Illegal immigration was doing economically and socially to his country and he started speaking out against it. He told the people that if they would elect him he would put a stop to it and they believed him.

He is referred to by his people as “Il Capitano” or The Captain, and according to many of the publications which usually describe him as far right or extreme right, he is constantly touring Italy out among the people transmitting his energy to them. You can watch videos of him wading into the crowds, shaking hands and kissing babies. He says that’s how he gets the power, the life force, and the confidence he needs to fight off the nation-wreckers.

In my view he is a good example of what is needed and what can be done by someone determined and unafraid. His quote and the title of this Report “Many enemies, much honor” basically says it all. He does have many enemies and is often the subject of vicious attacks. He just tries to keep a thick skin and let the social media comments go by. Unlike Mr. Trump, he doesn’t see the need to respond to every attack with something equally vicious. His typical response would be something such as “what a nice lady” and then he moves on.

Another thing that separates Mr. Salvini from Mr. Trump is that Mr. Salvini has actually delivered on his promises to stop the illegal migration into his country. He has proven that reducing illegal immigration is a simple matter of will. In the United States our politicians don’t have the will to do it because they don’t want to do it. They want to pay lip service to it in order to get elected and then by some strange way it always gets worse.

He uses the hostile attacks from the urban elites to mobilize his followers and gain support among the majority of Italians. It is similar to America, where in coastal areas such as California, New York, and Massachusetts, the Democrat mayors in the great American cities are hostile and not in favor of stopping illegal immigration. These are Democrat mayors in virtually every case with cities on the verge of or actually bankrupt. Even so, they still want to bring in more and more recipients of the remaining credit resources that they have. Mr. Salvini faces the same objections from Mayors in coastal cities of Italy, such as Palermo, Naples, and Florence among others.

How he does it

What these mayors are so upset about is what has come to be known as “The Salvini Decree”. Salvini says “Anyone who helps clandestine migrants hates Italians. They will answer for their actions before the law and the history books. I will not back down.” He went on to say, “Italy’s ports are closed. We have taken in too many fake refugees. We have enriched too many people-smugglers. Left wing mayors should think of the difficulties of their own citizens and not clandestine migrants.” He accuses the rescue ships of acting as a taxi service for would be refugees.

The mayor of Naples said, “To leave people and children in the middle of cold and stormy seas is a crime—not simply indecent, immoral and appalling.” The problem with that argument is that all the refugees have a home they left but could have remained in. They are not homeless people forced on to the boats by pirates. Instead they pay the people smugglers for the privilege of going into the Mediterranean to take their chances. Quite often the smugglers leave them at sea for the Italian Navy to rescue but Mr. Salvini will not let them land at any Italian port.

If you look at a map of where the boats are interdicted the vast majority are close to the shore of Libya. They just make it out to sea then wait to be rescued and taken to an Italian port but Matteo Salvini has put a stop to it. The results of his efforts are obvious for anyone to see. Illegal immigration is down 95% since Mr. Salvini became Deputy Prime Minister. The Italian people outside the liberal coastal areas rejoice because finally someone is not just wringing his hands and saying parliament won’t let me help you. Instead they finally have someone who is doing what he promised he would do.

Matteo Salvini cares—and some, but not all, other heads of state agree

Salvini has also sought out and worked with leaders in other countries of Europe who agree with him. Some of these things seem rather easy to implement and it’s hard to see why they are not implemented given how easy it would be. To cut illegal immigration by 95% he just had to close Italy’s ports and then fight off the constant screaming from those who accuse him of anti-Muslim bigotry. You have to be tough enough to take the heat or you should not be in the position in the first place.

The politicians of some countries don’t seem to care what their people want these days. They talk about democracy but when the people make their desires known they are ignored unless they are the same as the desires of the European ruling bureaucratic elite. The Brexit struggles in the United Kingdom, after the people voted for Brexit, are a good example of not caring about the will of the people. It is just another example of the destruction of the once sacrosanct will of law.

American pols take to the hills

Mr. Salvini sees it differently and his people appreciate his courage and determination. He has shown them that when one has the courage of his convictions he can make it work. Here in America, instead of taking the Salvini approach, the politicians spend their time searching for hills that they have decided are not worth dying on, and they usually find them. President Trump, for example, told us that he would build a wall and make Mexico pay for it but we have no wall and illegal immigration across the southern border in the first two months of 2019 set all time records. Contrast that with Italy which once had a terrible problem but in 2019 so far more have left than have come in.

Thousands cross the US border everyday with many of them diseased and otherwise dependent. Medical facilities have to be established along the border to accommodate them and treat their disease. The politicians of America are fairly despicable in that they are so anxious to pour the fruits of our labor into citizens of a foreign country. We work and we struggle to pay the taxes and our money is taken from us by force and used to treat foreign non taxpaying people. I don’t know about you but that infuriates me. Our labor represents the minutes, hours, days, and years of our lives taken from us by force and given away.

The first step to stopping illegal immigration is a simple rule. Only American citizens are going to receive welfare and other taxpayer funded benefits. If you are not in favor of that simple rule then you are in favor of illegal immigration and you should quit denying it. Just admit that you think America should feed, clothe, educate, house and medically provide for every person in the world who wants to come.

An example of courage

We could sure use a man with the courage and determination of Matteo Salvini right now. Does that mean I don’t think that President Trump was ever serious about border security? I’m afraid it does, unless when he assumed the office the people who actually run the world explained the facts of life and death to him. The Presidency of the United States is a difficult dangerous job especially when the media opposes you.

The featured image of Matteo Salvini (as Minister of the Interior) is licensed under the Creative Commons Attribution 3.0 Italy License https://creativecommons.org/licenses/by/3.0/it/deed.en and under these specific terms by the Italian Interior Ministry http://www.interno.gov.it/it/note-legali.