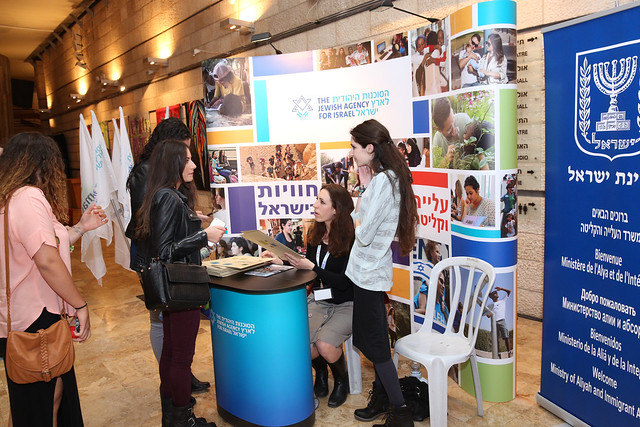 Have you heard of Kibbutz Galuyot? It means the “ingathering of the exiles”, or the return of Jews to Israel from all the countries of the world, as promised by the Prophets in the Hebrew Bible. Kibbutz Galuyot is the fulfillment of Biblical Prophecy, and continues unabated in our day.

Aliyah for many reasons

Aliyah (lit. going up), the immigration by Jews to Israel, rose by 29 percent in the first half of 2019, compared to first half of 2018, 16,005 Olim (new immigrants), made their home in Israel. Many are Russian speakers, from countries that were part of the former Soviet Union or former Eastern Bloc that have not yet joined the European Union. Countries that are facing financial problems, rising nationalism, and crackdowns on civil liberties.

But not all Jews moving to Israel are just fleeing oppression. Many move to Israel to live a fuller Jewish life personally, and to rebuild Jewish national life in the Jewish homeland, as the prophets foretold.

The Aliyah flight from North America

The new Olim are from 22 US states and two Canadian provinces. They include 21 medical professionals, three sets of twins, and a 28-day-old baby, who will officially become the youngest Oleh to make Aliyah with Nefesh B’Nefesh this summer.

Last week’s Shabbat, known as Shabbat Nachamu, got its name from the week’s Haftarah reading from the prophet Isaiah (ch. 40). The Haftarah followed the weekly Torah reading Va’etchanan in synagogues around the world.

Shabbat Nachamu begins seven weeks of prophetic readings of consolation (Sheva D’Nechamata). They start the Shabbat right after Tisha B’Av (the Jewish people’s national day of mourning over the destruction of Jerusalem their capital city, the Beit HaMikdash on the Temple Mount, and their exile from the land), till Rosh HaShanah (the Hebrew calendar New Year).

The prophetic readings promise the Jewish people, their return to the Land of Israel from the exile, leading ultimately to their complete redemption.

The prophet Isaiah opens with, “Comfort, comfort my people, says your God. Speak tenderly to Jerusalem, and proclaim to her, that her time [of exile] has ended…” (Isaiah 40:1-2).

Va’etchanan itself, follows the Torah reading Devarim/Deuteronomy, where Moses began his five week long sermon to the Jewish people, before his death. In it, he summarized the forty year desert experience, reminding the younger generation about to enter the Land of Israel, of the failed mission of the spies. And why, God punished their parent’s generation with not entering the land (for lack of faith in Him and His promise to give them Israel), (Deuteronomy 1:19-46).

In last week’s reading, Va’etchanan, we find nineteen references to the Land of Israel. They include entering, inheriting (a euphemism for conquering), possessing and living in the Promised Israel, or as the Torah calls it several times, HaAretz HaTova (the good land).

The centrality of the land

Moses begs God, “let me go over, and see the good land that is on the other side of the Jordan, that goodly mountain (the Temple Mount in Jerusalem – Rashi), and the Lebanon (the Holy Temple – Rashi), (Deuteronomy 3:25).

But God answers no, “…you shall command Joshua, and encourage and strengthen him, for he will lead this people across and will cause them to inherit the land…” (Deuteronomy 3:28).

Then Moses tells Israel, “…hear the decrees and laws I am about to teach you. Follow them so that you may live and may go in and take possession of the land, the Lord, the God of your forefathers, is giving you,” (Deuteronomy 4:1).

Moses continues, “See, I have taught you decrees and laws as the Lord my God commanded me, so that you may follow them in the land you are entering to take possession, (Deuteronomy 4:5).

“…the decrees and laws that you shall perform in the land that you are crossing [the Jordan] to inherit,” (Deuteronomy 4:14).

Then Moses returns to why he won’t lead them, “The Lord was angry with me because of you, and he solemnly swore that I would not cross the Jordan and enter the good land, the Lord your God is giving you as your inheritance. I will die in this land; I will not cross the Jordan; but you are about to cross over and take possession of that good land,” (Deuteronomy 4:21-22).

Sin and its consequences

Moses then warns against sinning and its consequences, “…and have lived long in the land, if you then become corrupt and make any kind of idol…that you will quickly perish from the land that you are crossing the Jordan to possess.” (Deuteronomy 4:25-26).

Then Moses tells the Jews, “Because He loved your forefathers and chose their descendants [you] after them, he brought you out of Egypt… [He will] drive out before you nations greater and stronger than you, and bring you into their land to give it to you for your inheritance…” (Deuteronomy 4:37-38).

He again warns, “Keep His decrees and commandments, which I am giving you today…that you may live long in the land that the Lord your God gives to you for all time,” (Deuteronomy 4:40).

Obedience to the commands

God then tells Moses, “…all the commands, decrees and laws that you shall teach them to do in the land I am giving them to possess.”

And Moses tells Israel, “Be careful to do what the Lord your God has commanded you; do not turn aside to the right or to the left…so that you may live and prosper and prolong your days in the land that you will possess,” (Deuteronomy 5:28-30).

Moses reminds them again, “These are the commands, decrees and laws the Lord your God directed me to teach you to observe in the land that you are crossing the Jordan to possess, so that you, your children and their children after them may fear the Lord your God as long as you live…”

“Listen Israel, and be careful to perform [the commandments], so that it may go well with you, and that you may increase greatly in a land flowing with milk and honey, just as the Lord, the God of your forefathers, promised you…When the Lord your God brings you into the land he swore to your fathers, to Abraham, Isaac and Jacob, to give you…” (Deuteronomy 6:1-10).

Doing what is right in the sight of the LORD

Moses then tells them, “Do what is right and good in the Lord’s sight, so that it will be good for you, and you may go in and take over the good land the Lord promised to your forefathers, driving out all your enemies before you, as the Lord said…”

“And in the future, when your son asks you, What is the meaning of the testimonies, decrees and laws the Lord our God has commanded you? Tell him, We were slaves of Pharaoh in Egypt, but the Lord brought us out of Egypt with a mighty hand. Before our eyes the Lord sent signs and wonders – great and terrible – on Egypt and Pharaoh and his whole household. He brought us out from there, to bring us in and give us the land he promised on to our ancestors,” (Deuteronomy 6:18-23).

Make no treaty, give no quarter

Moses concludes, “When the Lord your God brings you into the land you are entering to possess and drives out before you many nations, the Hittites, Girgashites, Amorites, Canaanites, Perizzites, Hivites and Jebusites, seven nations larger and stronger than you, and when the Lord your God has delivered them over to you, and you have defeated them, then you must destroy them totally.”

Earlier God had told Moses to warn Israel, “But if you [Israel] do not drive out the inhabitants of the land, those you allow to remain will become barbs in your eyes and thorns in your sides. They will give you trouble in the land where you will live,” (Numbers 33:55).

It sounds a lot like the problem of Arab terror that Jews suffer from today!

So, thirty nine years earlier, the spies destroyed the Jewish people’s enthusiasm to enter the Land of Israel. Then, Moses describes God’s promise to bring them into the land, the conditions to successfully live there, i.e. keep His Torah and Mitzvot; conquer the land and drive out the evil inhabitants. Moses then warns that sinning will bring exile, and finally the prophet Isaiah promises consolation will come. He describes the time the exile will end and the Jewish people’s return to the land will begin.

Now is the time to make Aliyah!

Va’etchanan: Consolation And The Return Of The Jews To Israel