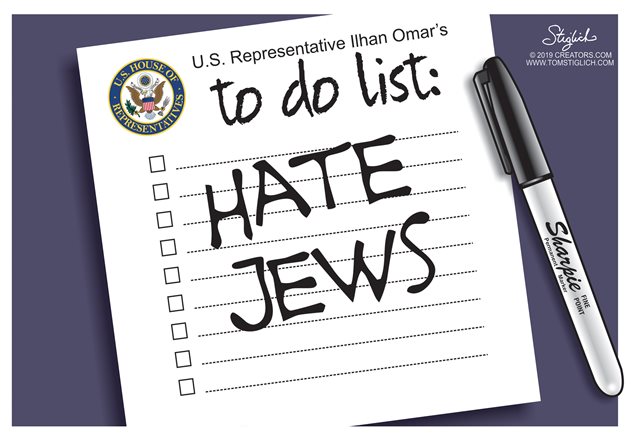 President Trump has been unarguably the most pro-Jewish, pro-Israel President we’ve ever had, surpassing George Washington, John Adams, Abraham Lincoln and Harry Truman. His stand against Iran (vociferous enemy of Israel), finally moving the US embassy to Jerusalem, cutting funds to the PA and closing the PLO office in Washington, his donations to Jewish causes, and developing housing for Russian-Jewish immigrants in Brooklyn are just some of the points, but many non-Orthodox American Jews are calling him antisemitic. It is primarily the Democrat Jews who appear antisemitic when they continue to support their party whose members explicitly express their hatred of Israel and Jews worldwide. It may be that their desire to distance themselves from their heritage in eastern Europe and Israel has rendered them irrational, and psychological projection has them denying their own impulses as they attribute them to others – specifically to President Trump.

Most recently, President Trump spoke out against the antisemitism spewed by Muslim Congresswomen Rashida Tlaib and Ilhan Omar, and was himself accused of bias. It is time to review the backgrounds of both women who are recognized as Islamic extremists and antisemites by such as Senator Lindsey Graham, Speaker Newt Gingrich, media personalities Mark Thiessen and Rush Limbaugh, as well as by Imam Tawhidi, who added Representative Alexandria Ocasio-Cortez to the lot.

Antisemitism in public policy: supporting BDS and sympathizing with murderers

Exactly why Israel denied her a visa

Ilhan Omar claimed to love America but shows her disdain for our country at every turn with a decided detestation for Israel and the Jews. She called herself the President’s “biggest nemesis”; said of the terrorist attacks on 9/11, “some people did something”; and wants our greatest ally, Israel, wiped off the face of the earth. The following are examples of her words and deeds:

Excusing terrorist acts by throwing off on America and the world

Antisemitism at a new level in Congress

Why do Democrat Jews support antisemitism and antisemites in Congress?

There is no question that both Omar and Tlaib are antisemites who seek to destroy Israel and endanger Jews worldwide, and that the Democrat Jews who support those policies are collaborators. Those who speak ill of President Trump and PM Netanyahu and side with the Marxist-Islamic ideology emanating from the Democrat party, who compare the southern-border invaders to the Holocaust’s Jewish refugees, and who failed to attend and celebrate the dedication of the US embassy in Jerusalem, Israel’s capital, cannot be judged otherwise. Yes, President Trump’s honesty may sting, but it is nevertheless honesty.

According to Jewish law, the Democrat Jews are still Jews, but the betrayal of their own brethren and heritage confirm that they are not in consonance with the laws and morality of Judaism – their hearts are elsewhere.

With appreciation to frontpagemag.com for their detailed reporting.

Socialism is Immoral and Unethical

The Bank Of Israel, Gold, And The Third Temple