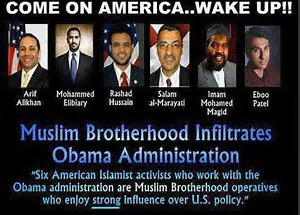 “It is the nature of Islam to dominate, not to be dominated, to impose its law on all nations and to extend its power to the entire planet.” -Hassan Al-Banna

“The West is tremendously naive about the danger of these various Islamic organizations.” -Dr. Mamoun Fandy, Middle East expert on the network of organizations around the Muslim Brotherhood

Muslims do not want to assimilate, and they say they don’t.

Fifty years ago, I could have, and probably would have been called a conspiracy theorist for warning Americans of the coming judgments upon this country through the people that the Lord is using to do so (Deuteronomy 28:15-68). I’m talking about subversive Muslims that are not here to assimilate but to conquer, just ask them.

Today, theory is far from this information laid before you because we see this all playing out before our eyes in real time. Theory no, conspiracy yes (Jeremiah 11:9).

JIHAD WATCH Reported that 93% of Muslim Public Officials Would Not Express Support for the Constitution They Swore to Uphold.

What follows between the lines are all direct quotes from this article, except for the headlines. I present it this way to account for quotes within quotes. – Ed.

Each and every one of us has a directive to represent Islam, in all of our imperfections, but to represent Islam and let the world know that Muslims are here to stay, and Muslims are a part of America. And we will, we will have a Muslim caucus that is sizable, that is formidable, and that is there for you.

Requirement to take an oath to support the Constitution

People in public office at the local, state, and federal levels are required to take an oath of office that requires them to swear, or affirm, to support the U.S. Constitution. This is based on Article 6, Clause 3 of that Constitution (the “Oaths Clause”):

The Senators and Representatives[in Congress]before mentioned, and the Members of the several State Legislatures, and all executive and judicial Officers, both of the United States and of the several States, shall be bound by Oath or Affirmation, to support this Constitution…

This constitutional requirement is binding upon every government official in the United States from state governors and judges to members of city councils, police officers, firefighters or board members of mosquito abatement districts and library boards.[1]

The 2019 elections saw an increase in the number of Muslims re-elected and newly elected to public office across the United States, and as part of their oaths of office they each swear to support the U.S. Constitution. However, as I showed in my latest book Islamic Doctrine versus the U.S. Constitution: The Dilemma for Muslim Public Officials,[2] there are many core tenets of Islam that are in direct conflict with much of that Constitution.

A test of fealty

So I decided to put that to the test. In Chapters 10 and 11 of my latest book I provided a number of questions that could be asked of a Muslim public official and that require that official to choose between the Constitution and Islamic Doctrine. I put four of those questions into an e-mail and individually sent that e-mail to eighty Muslim public officials across the United States.

We shall first look at the four questions I used and then examine the variety of responses I received. I then list the Muslim public officials, by State, who did not respond to what, considering their oath of office, should have been simple questions to answer. This is followed by my concluding remarks.

Look at how Muslims took over many countries in Europe

What is it that the American people do not understand when it comes to what is taking place here in the homeland? Look to Europe and you will soon understand.

What our forefathers and veterans have fought off concerning our sworn enemies (Say they), the American people are now accepting, and that to their own demise.

Is This a PANDEMIC or a DEMPANIC?

Where does the 93% figure come from? I am unable to find any citations concerning that assertion, on this page or any of the linked articles. Could someone please show me how this figure was deduced?

See the article from Judicial Watch. Follow that link.

The first thing people have to remember, or learn, is that Islam is NOT a religion. It is a theocracy that is dedicated to forcing people to worship the god Hubal. Islamic/Muslims have fealty to Islam and Islam alone. And Islam has been waging non-stop war for 1400 years ever since Mohammad’s lies about whom Hubal was was rejected by just about everyone.

The Arabic word “allah” is a contraction of the Arabic words “al”, which means “the”, and “ilah” which means “god”, which was used to reference Hubal. Hubal is associated with the moon and is chief god of a pantheon of around 360 gods and goddesses.