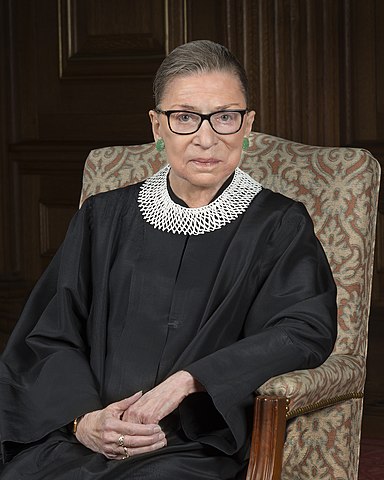 Yesterday evening, the one event happened that cancels all bets on the Election of 2020. Madame Justice Ruth Bader Ginsburg, 87, died of complications of the cancers that burdened her. Very soon she will be the only person relevant to American politics who will enjoy any sort of peace.

Ruth Bader Ginsburg – for what did she stand?

A full biography of Ruth Bader Ginsburg (1933-2020) would be beyond scope and almost off topic here. Opinions on the value of her contribution to American jurisprudence will likely be as varied as are her biographers. CNAV will here observe that Ruth Bader Ginsburg fought tirelessly and consistently, not for the Constitution per se but for the results she wanted to achieve. One could predict with near-certainty how she would vote on an issue, purely on the likely public-policy results.

CNAV does not say that her zeal for those results knew no bounds. Otherwise the Court would never have issued any per curiam—that is, unanimous—opinions during her tenure. The one thing that tempered her resolve, she expressed this way:

Fight for the things that you care about, but do it in a way that will lead others to join you.

And true enough, she knew well enough to set some boundary. So she never set at naught the clear text of law or Constitution.

But, like all her colleagues and especially the leftist ones (Breyer, Kagan, and Sotomayor JJ), she nibbled at the ambiguous text, and words that seem to have changed their meanings. Thus “general welfare” ceased to mean “welfare of the federal union of States” and became “welfare of members of the general population.”

Furthermore, Ruth Bader Ginsburg went on record advising new “republics” not to use the United Stated Constitution. She even expressed a desire, or a determination, to cite foreign constitutions as authorities for her decisions. From the content of those foreign constitutions, CNAV infers the results she wanted. She plumped, in essence, for a communistic society, one that would:

CNAV does not pretend that she would ever appreciate the irony. Especially since she also plumped for abortion on demand, universally applicable, at taxpayer expense. So one must infer from these two salient quotes by her.

For that reason, CNAV regards Ruth Bader Ginsburg as a worthy adversary. But one that, in an ideal world, Congress would long since have removed from the bench on impeachment for, and conviction of, infidelity to the Constitution, in violation of her oath of office.

Should Ruth Bader Ginsburg have stood down earlier?

Tellingly, in the second term during which Barack Hussein Obama II held office as President, his ardent advocates urged Ruth Bader Ginsburg to step down. But not because they disagreed with her “twisting and shaping” the Constitution like Thomas Jefferson’s “mere thing of wax.” Rather, because her health was failing even then, and those advocates feared a Republican would replace Obama. After all, Republicans had come to control both chambers of Congress by 2014. Suppose, then, that she died during a Republican’s term as President? He then would appoint a jurist who would reverse every precedent for which she cast the deciding vote.

But Ruth Bader Ginsburg refused to stand down. Now her advocates see their worst fears come to pass. First, the American people elected Donald J. Trump as President. Next, President Trump gave every indication of the sort of jurist he would appoint, with his appointments of Neil Gorsuch and Brett Kavanaugh. More recently he released a list of his favorite candidates for the Court, among them Senator Ted Cruz (R-Texas).

And now Ruth Bader Ginsburg has died. Furthermore, she died before the election, and when the Court would have to decide that election. For which the political left have none to blame but themselves. Having scared their base into cowering in their homes, they proposed that everyone cast their ballots by mail. The Court already is ruling on challenges to election law in each of the several States. In the midst of which, the left has lost a key voice for the sort of rule changes that will, if they apply, help the Democratic Party defraud the President of re-election all too easily.

And let the reader understand that the left knows it! Behold their often rude, profane, and obscene reactions. (Warning: The language in the below tweets and videos would make the meanest longshoreman in New York Harbor blush. CNAV strongly urges parental judgment and discretion!)

In addition to which came a number of tweets whose authors deleted them, if Twitter Moderation did not delete them. Did they so act by reason of the coarse language? Hardly, if the tweets that are “still up” are a fair sample. More likely because they give the game away. See this selection from DC Swamp Watch.

Furthermore, some of these people, including former CNN show hosts, now threaten their opponents with death, injury and property damage if the President and Senate act now to fill the vacancy.

Many thanks to Kitty Shackleford for preserving archives and evidence of attempts to intimidate voters and the officials they elected.

Ruth Bader Ginsburg herself understood the stakes. A few days before she died, she told her granddaughter:

My most fervent wish is that I will not be replaced until a new president is installed.

What did Ruth Bader Ginsburg know that her family and the rest of us did/do not?!? Surely she would never expect any President to let a seat on the Supreme Court stay vacant for four years! Even Franklin Delano Roosevelt, famous for trying to enlarge the Court by six seats, never dared do that!

So was a fix in for the election to come? What did Ginsburg J know and when did she know it?!?

Barack Obama presumed to demand that the Senate honor that last wish.

Do any of you, reading this, find this inference difficult to accept? You should not. CNAV stands by its assertion of more than two years ago. Barack Obama and/or his minions murdered Justice Antonin Scalia. Then when the Senate refused to vote on Merrick Garland to replace him, the Democrats cried foul.

Fill her vacancy at once!

In fact, Senator Mitch McConnel (R-Ky.), Republican Floor Leader, asserts that the Senate has never confirmed a candidate for the Supreme Court, that an opposite-party President sent to the Senate, during the last year before the election.

The Senator also pledged that the Senate would vote on any nomination the President sent to it, as soon as the nomination arrived.

President Trump has already said he would send a nomination immediately to replace Ruth Bader Ginsburg.

Senator Ted Cruz backed the President on this point:

CNAV supports the President in his apparent determination to fill the vacancy immediately. A new Justice will be in a position to hear and read argument on any attempted State-level rule changes that have not yet come before the Court. Ruth Bader Ginsburg dropped a dark hint that she knew a fix was in, and was in on it. She never gave herself to wishful thinking on the scale of demanding that a President forbear to fill a vacancy for four years. Facing that, the President should let nothing stop him from nominating a successor right away. Least of all a demand from a former “President” who was not even a natural born citizen!

In ancient Rome, then-junior consul Marcus Calpurnius Bibulus sought to stop the machinery of government. He retired to his house to watch the skies, hoping to suspend all public business. His senior colleague in the consulship was having none of such nonsense. And his name? Gaius Julius Caesar.

Today, Barack Obama presumes to tell his successor in office to go home and watch the skies for four years. Let him so demand and be damned. The modern Caesar that is Donald J. Trump ought to take absolutely no notice.

Climate change in the Senate - Conservative News and Views

Pro-life win – what next? - Conservative News and Views