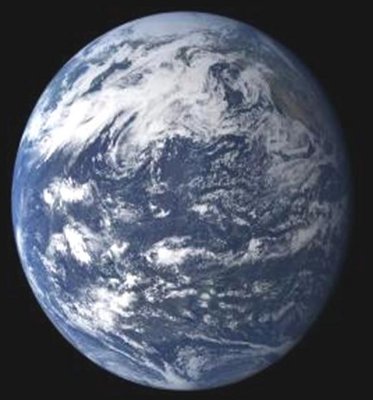 The most familiar religious story in America about how the world and mankind came to be is the Creation story and its immediate sequels in Genesis chapters 1-11. Yet few Americans realize that that story has a sound scientific basis.

The Gallup News Service tracked Americans’ positions on origins from 1982 to 2005. Typically Gallup would run its poll on this issue by asking this question:

Which of the following statements comes closest to your views on the origin and development of human beings? [ROTATE 1-3/3-1:]

Or, to make a long story short:

(Note that in 2005 the divine-creation option read, “God created human beings in their present form exactly the way the Bible describes it.”)

The 1982 result is especially remarkable, because Ronald W. Reagan, when he stood for election as President of the United States, made no secret of his belief in the literal Creation story. His opponents, after Saul Alinsky, attempted to hold him up to ridicule for that belief, but they never shook it. History records his overwhelming victory in the 1980 and 1984 Presidential elections (and also that he described the old Union of Soviet Socialist Republics as “the evil empire” and specifically cited their institutionalized atheism as a key cause of their “evil”). 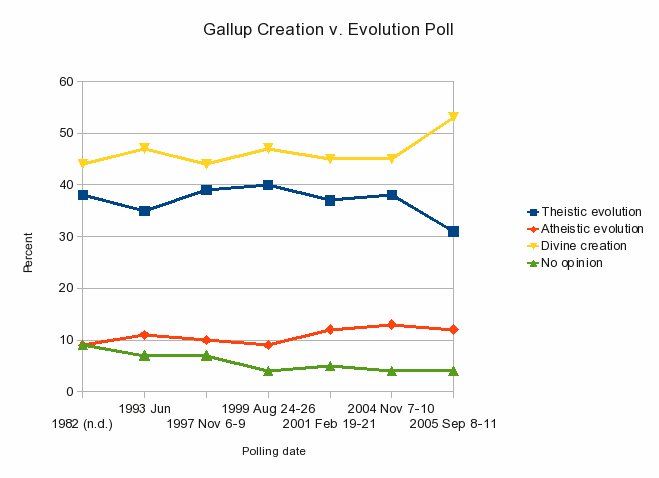 As this graph shows, a clear plurality of Americans has always accepted—or perhaps the better word is preferred—the Divine Creation account, with slightly fewer of them accepting Theistic Evolution. Atheistic Evolution has held the respect of not more than 13 percent of the population. The only definable trend in these data is that the passage of time has led more Americans to formulate and stick by their opinions. With one exception: in the most recent result, Divine Creation rocketed to a clear majority, not a mere plurality. It achieved this result at the expense of Theistic Evolution, rather than Atheistic Evolution, which changed little (and had little to lose).

Gallup asked a cross-section of American adults, and qualified each as to maximum level of education and political preference. As expected, college graduates tend to believe less in Divine Creation than do those who have had only some high school. Furthermore, Republicans prefer Divine Creation more than do Democrats. But though Gallup insisted on aggregating its results before breaking them down by education, religious observance (that is, whether they attended their respective houses of worship regularly or only during the major feasts, cf. Christmas and Easter for Christians; Passover, Day of Atonement, Tabernacles, Lights, Dedication, etc. for Jews; Ramadan, Eid al-Fitr, etc. for Muslims), party affiliation (or lack thereof), and the like, your editor prefers to leave them disaggregated and observe the trend (or again, lack of it) and the relative prevalences, which have remained near-constant over time.

Your editor, after discussing these findings with Walt Brown, head of the Center for Scientific Creation, interprets these findings thus: People want to believe in Divine Creation. They have never felt comfortable with accepting the dry, you’re-just-a-cosmic-accident worldview of Atheistic Evolution. The reason: they look at what the worldview of Atheism has wrought, and if your editor were to ask them, “How’s that progressive society thing been working out for you?” they would likely answer, “Not well.”

A single illustration would suffice: Actor Danny DeVito, in the motion picture The War of the Roses (Twentieth-Century-Fox, 1989), makes this statement:

At fifteen, I became an evolutionist. And then it all became clear to me: We came from mud! And after 3.8 billion years of evolution, at the core, we’re still mud. Nobody can be a divorce lawyer and not believe that.

And nobody can lament the “divorce culture” in America and not have a sense that the continued denial of the existence of God might be responsible.

But wanting to believe something, and feeling fully comfortable with it, are not the same thing. So when people hear of what Gallup arrogantly calls “the preponderance of scientific evidence,” they say to themselves, “I guess that literal Genesis story is all wet. But then again, I still won’t have any truck with those atheists.” They then settle for Theistic Evolution, which leaves a role for God in the process and, as they believe, still suggests that God is a Force to be reckoned with. (That Gallup did not publish any trends in belief in Theistic versus Atheistic Evolution as a function of progressively high levels of education is telling. Perhaps they don’t want to admit that the university system is not as successful in drumming belief in God out of a college student’s malleable mind as they might wish. But your editor digresses.)

This is why one investigates creation: to settle, in inquiring minds, whether Creation is truly Divine or merely Progressive, or in other words, to settle the debate between Divine Creation and Evolution. Sadly, that debate remains unsettled in voters’ minds. This is one reason why Delaware Senate Candidate Christine O’Donnell lost what ought to have been an easy Senate race against an admitted tax-raiser (not to mention an insufferable grouch), and why former Governor Sarah Palin of Alaska still has the posture of a “lightweight” Neither candidate understands, or is prepared to articulate when challenged, that the “evidence” in favor of evolution, far from preponderant, is at best thin, and at worst a total fraud.

Your editor, in the course of first his education, and next his independent investigation, passed through several stages of belief and disbelief. His secondary schools taught Theistic Evolution. College (Yale College, Class of 1980) and especially medical school (Baylor College of Medicine, Class of 1985) taught Atheistic Evolution. The only reason that your editor did not become a stone-cold atheist was the association of atheism with a movement that, at the time, aimed at world conquest and the attempt to supplant God (not to mention the boorish behavior of Madalyn Murray O’Hair and her family, before they hired a “comptroller” who discovered that they intended to loot their own movement, murdered them, took the loot, and then lost it in turn to other thieves!).

And then your editor began to investigate the “preponderance of scientific evidence,” and found that much of it was flawed or outright fraudulent. Piltdown and Peking Men are the two obvious examples. But more than that:

That was only the beginning. Atheistic Evolution has made hundreds of statements that are either false on their face, or at least impossible to believe.

Therefore: to investigate creation fully is to find that the evidence favors creation, not evolution. Lee Strobel discovered this. And your editor hopes to show this to you as well.