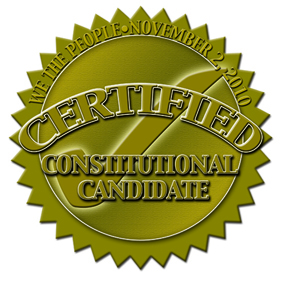 For too long, American voters have elected politicians to legislative, executive, and in some States, judicial office without even expecting, much less asking, them to be faithful to the US Constitution or their respective State constitutions. All that has seemed to matter, either to the candidates themselves or to some who have voted for them, have been results–and to be more specific, the enactment of certain policies, whether those policies are in accord with the Constitution or not. This is inappropriate. The Framers wrote the Constitution, and put certain things in it (and left certain other things out of it) for a reason, and that reason is: a free people can never trust their government implicitly, but must always set limits on what that government can do.

A Prince, whose character is thus marked by every act which may define a Tyrant, is unfit to be the ruler of a free people.

And an elected official whose every act is one that may define a tyrant, is likewise unfit to lead, or even to serve.

Herewith a list of questions that voters must ask of any candidate for elected office, by way of demanding fidelity to Constitutional principles, which is the only context by which our society will solve the present problem before it becomes intractable:

These questions go to the heart of things that elected officials have too long left undone when they ought to have done them, and done when they ought not to. They also address certain weaknesses in the Constitution that have, frankly, created moral hazards for the elected (and appointed) leaders of our federal government and its member States.