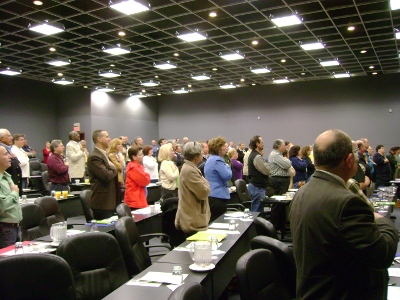 New Jersey’s first Citizens’ Convention—The Battle for Trenton—took place Saturday, April 16th at the National Conference Center in East Windsor.  It was a huge success as citizens all across the state gathered to learn how to effectively assist political campaigns and candidates they believe in.

While the event and its organizers received criticism from several political factions and operatives, it laid the groundwork for more successful events of this nature in the future as well.  Sue Ann Penna, an organizing committee member stated, “The Convention may be over but the real battle has just begun. This Convention proved that the TEA Parties in New Jersey are a force to be reckoned with and we are all excited about what we have accomplished and how the seeds we have sown will flourish in the Garden State.”

The historic event began with a moving rendition of the Star Spangled Banner by viola virtuoso, Barbara Wolfe, which was followed by a powerful invocation from Pastor Barbara from Harlem.  Former state senator, Richard LaRossa, often attacked by opponents and critics of the Convention for his participation in the event, set a high standard for the speakers that would follow.

We are ordinary citizens who have come together to do an extraordinary thing and we have borne the wrath of the establishment in the process.  The career politicians know that they govern by our consent. They also know that we are not happy with what they have done to our state and our country and we are withdrawing our consent.  This Convention has separated the wolves in sheep’s clothing from New Jersey’s real patriots. Those patriots filled the Conference Center on Saturday and they went back to their home towns with the knowledge they need to help elect candidates who share the same commitment to Tea Party values and ideals.

“The first Battle for Trenton turned the tides of the Revolutionary War,” commented Al Frech, another organizer and Master of Ceremonies. Frech continued,

We expect this Battle will turn the tides for the revolution we are fighting here and now in New Jersey.  We the People still own this country and we are not about to forfeit it to a bunch of political elitists.  They have underestimated the resolve of our patriots.

The Convention ended with an afternoon session where numerous candidates from a variety of political parties were presented.  All candidates were vetted to be sure they were committed to the principles the organizers agreed upon: Limited Constitutional Government, Fiscal Responsibility, Personal Integrity, and Free Markets.

Mark Falzon of the Jersey Shore Tea Party looked forward to next year,

We have only begun to fight this battle.  Next year we intend to continue the work that we begun here.  We will not give up until the battle is won and our Constitutional government is preserved and protected for our posterity.

Related Topics:candidateelectionlibertyTea Party
Up Next