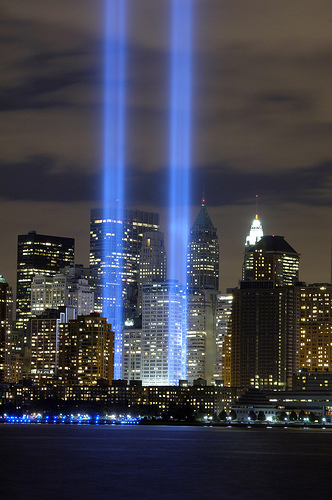 As President Barack H. Obama traveled to “Ground Zero” in Lower Manhattan to speak about the killing of Usama bin Laden, an actual 9/11 family member wanted no part of his “victory roll.”

Rosa Leonetti, a leader in the New Jersey chapter of Smart Girl Politics, spoke to your editor at 11:30 a.m. today. She began the interview by stating flatly that she was traveling to Ground Zero, but not to be part of any speechmaking by the President. “I want no part of the victory roll,” she said. Later on, she added:

Making a simple announcement that Usama bin Laden is dead, that was appropriate. But his trip to Ground Zero is not.

Indeed, when your editor asked her to whom she would give credit for Bin Laden’s killing, she named the following, in this order:

About this last, Leonetti observed,

He could have done a Bill Clinton, and refused to give the order. Instead, he gave the order, and he deserves credit for that.

Still, she criticized Obama for the tone of his first announcement, saying that it contained too many references to himself, and almost none for the men who actually carried out the operation.

Leonetti admitted that the news of Bin Laden’s death brought back to her, in full force, all the shock and grief of the losses of her family members. This included a New York fireman, the father of her niece, who was three years old at the time. She spoke in a halting voice that showed your editor, better than any words could, that the emotions of that event remained tender, even after nearly ten years had passed.

Leonetti also criticized the decision to bury Bin Laden according to Muslim ceremony.

I don’t understand why we have to do the politically correct thing. Three thousand people died that day, and none of us had any bodies to recover.

Speaking of which, she also wondered aloud why President Obama refuses to release any of the post-mortem photographs of Bin Laden:

I saw the photographs of the other man who died in that compound. Gruesome, sure it was, but at least he had a body.

She also discounted the notion that the release of photographs of Bin Laden would inflame the Arab world:

Where are the loud outcries for vengeance for this man’s blood? I haven’t seen it. Have you?

In fact, calls for vengeance have appeared—from the radical group Hamas, in control in the Gaza Strip; from the imam of the Al-Aqsa Mosque on the Temple Mount in Jerusalem; and from several legislators and officials in Iran. Leonetti observed that those particular callers were all propagandists with an agenda, not authentic members of any public. As to what that Arab public likely feels, she said:

This man was not a Muslim leader. He killed thousands of Muslims, he and his network. No one has any reason to mourn him now.

[…] Mr. Obama does not want to spike the ball, but we see him the very next day awarding medals to the families of two fallen American heroes, and on September 11th he will probably be in Manhattan comforting […]

We didn’t have any bodies of the people killed on 9/11 that we showed on TV and I think that’s why the President didn’t show the details of the body of UBL. It would provoke his people to retaliate even more than what they may already be planning. Why add fuel to the fire?

I was reading something else regarding this on another site. Interesting, your position on it is diametrically opposed to what I read before. I’m still pondering over the different points of view, but I’m leaning to a great extent toward yours. And irrespective, that’s what is so great about modern democracy and the marketplace of thoughts online.