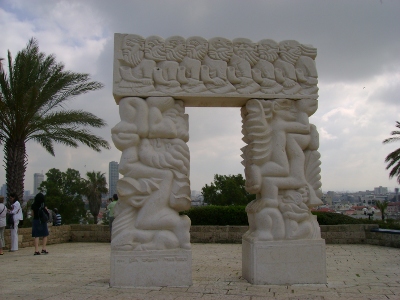 Jaffa or Joppa (Hebrew: Yafo), is one of the oldest port cities in the world. Today it has lost its independent identity, after Tel Aviv, to the north, incorporated it within itself. But Jaffa still has a lot of history, in the Old and New Testaments.

The prophet Jonah, trying to run from his responsibility as a prophet, boarded a ship at Jaffa to get to Tarshish (probably the modern Gibraltar). God, of course, is not the sort of Commanding Officer that one can run away from for very long. Jonah himself tells his own humiliating story of how a great fish (probably not a whale) swallowed him and carried him in his belly for three days and nights. This even prefigured the death and burial of Christ, Who lay in the ground for three days and nights, until His Resurrection.

Jaffa is also the site of two New Testament events, and Peter of Galilee figures in both. In one, Peter raised Tabitha, a follower of Jesus Christ, from the dead. (Acts 9:36-43) This feat earned Peter a reputation, so that a Roman centurion named Cornelius, stationed in Caesarea Maritima, sent messengers to Peter, asking him to come and tell him about Jesus Christ.

Peter would not have gone, not wanting to discuss such things with a Gentile (and worse yet, a Roman). But then Peter saw three successive visions of a buffet of foods of a sort that Peter, conscientious Jew that he was, did not eat. Three times God spread this buffet before him, and then came the real message: he was to go up the Coastal Road to Caesarea Maritima, seek out Cornelius, and tell him all about Jesus.

Today the Franciscan St. Peter’s Church still stands in Jaffa, to commemorate those events. Rumor states that Napoleon Bonaparte had rooms in this church, as he was managing his campaign in Egypt and Syria.

Another famous monument in Jaffa: the Statue of Faith, an arch depicting three key scenes in the history of the Jewish people and their ancestors:

In 1947, the United Nations originally proposed to give Jaffa to the Arab state of “Palestine” in its initial partition plan, on account of Jaffa’s large Arab population. (Jaffa is presumably the town outside of Tel Aviv and Lod, or Lydda, that Lt. Col. David “Mickey” Marcus passes through in a tank-like bus that comes under heavy sniper fire in the MGM motion picture Cast a Giant Shadow.) The Arabs, of course, rejected the partition and launched a war to capture all of Israel after David Ben-Gurion unilaterally declared independence. In the ensuing fighting, the Haganah (precursor to the modern Tzva HaHaganah LeYsrael, or Tzahal, which in English we call the IDF) captured Jaffa on May 14, 1948. Even before this offensive began, most of the Arab population fled Jaffa en masse. In the ensuing years, Tel Aviv incorporated Jaffa within its limits, forming a new, larger city known officially as Tel Aviv-Yafo.

Tel Aviv is a completely modern city, and in Tel Aviv one can see the most obvious demonstrations of how the early Zionists reclaimed the desert and swampland that prevailed in “Palestine” in the days of the Ottoman Empire. Turkish landowners sold land that they considered worthless to the Jews. Undaunted, the Jews planted eucalyptus, to drain the swamps. Israel has also developed some of the most innovative agricultural techniques on display anywhere, for drip irrigation and other ways to conserve water.

Agriculture occupies an important place in Israeli society and history. Furthermore, Israelis believe that the primary source of the next multinational war will be famine, not energy shortage. For those reasons, Israel’s constitution does not recognize, nor allow anyone to stake, any such thing as an intellectual property claim over any invention or process relating to agriculture.

Related Topics:biblehistoryIsraelJaffaJonahPeter of Galilee
Up Next

Appreciate the modern look. I liked this article. Thanks a lot for a useful page.

Valuable info. Lucky me I found your site by accident, I bookmarked it.

[…] Journey to Israel, Day 2: Jaffa – Conservative News and ViewsMay 8, 2011 … Another famous monument in Jaffa: the Statue of Faith, an arch depicting three key scenes in the history of the Jewish people and their … […]