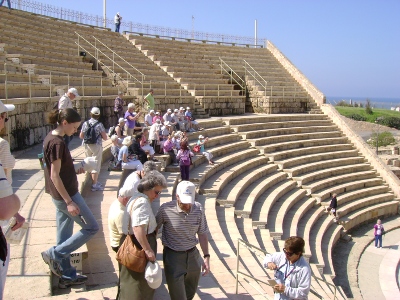 Caesaria Maritima, the “Caesaria” of the Bible, is the first stop north of Tel Aviv-Jaffa along the old Coastal Road. This road once carried Roman, Greek, and even more ancient travelers for thousands of years. Today, motorists drive it from Tel Aviv with the ancient and modern cities further north.

Caesaria Maritima was the seat of Roman power. (That seat was not in Jerusalem, though the Fortress of Antonia stood there, next to the Temple.) In Caesaria, men like Valerius Gratus, Pontius Pilate, Antonius Felix, and Marcus Porcius Festus held office as Prefect of Judea. Archaeologists recently discovered a stone that records that Pontius Pilate, Prefect of Judea, built a building in honor of Emperor Tiberius. This proves not only that Pilate was a real person, but that he held office in the likely year that Jesus died.

Caesaria Maritima was originally a project of Herod the Great. He built a theater, a hippodrome (literally “horse home,” actually a chariot racecourse, like Rome’s Circus Maximus), and an aqueduct to bring water to the city. The theater still stands, and is still in use for live performances; a production of Aida played to evening audiences while your editor was in the country. Voices carry as well as claimed in Herod’s Theater; a fellow tourist sang Great Is Thy Faithfulness, and the rest of us could hear him plainly.

The Hippodrome is a very recent discovery. Archaeologists have now dug out the racecourse, the stables, and some of the seats. If Judah Ben-Hur and Marcus Valerius Messala had been real persons, they would have run their fateful race in that very place, nearly two thousand years ago. And everything that Director William Wyler said of the Hippodrome is right: as the actor Sam Jaffe remarks,

There is no law in the arena.

As our tour guide confirmed, chariot racers often mounted serrated spikes on their wheels to shred an opponent’s wheels. Romans loved their blood sport, and if one driver killed another on the track, the bloodier the better.

Herod built Caesaria to give his people pleasure, so that they would not look too closely at the workings of government. (Some say that the US government uses some of its projects to serve the same ends.)

Click for larger version of this writing on a sarcophagus of a Christian buried in this city.

Centuries later, Louis IX of France set up his Crusader Kingdom at the site. His original Crusader palace, with its slanted wall and right-angled entry, still stands.

The description of the city’s utilities bridges the ancient and the modern. A portion of Herod’s Aqueduct, a gravity-fed channel that brought water to the city from Mount Carmel, still stands. And down the coast from the theater, the triple stacks of modern Israel’s one and only coal-fired power station rise. This was Israel’s best effort at making themselves less dependent on oil from Egypt, before the recent discovery of 24 million cubic feet of natural gas off the Mediterranean coast.

Israel has no nuclear power. The only reactor designs that could work would need seawater for cooling. But all of Israel’s coastline is very well-developed and crowded. So taking in seawater and discharging it scalding hot would not work. (The recent near-meltdowns at a nuclear plant in Japan further convinced Prime Minister Benjamin Netanyahu not to build nuclear power plants.)

So Israel must conserve wherever it can. So, by law, every multi-family dwelling, and nearly every single-family house, sports a passive-solar hot water tank and solar battery (facing south, of course). The landlord or homeowner must pay for it, but he usually breaks even in less than one year. So an ordinary resident can have hot water until late at night, with the very hot sun as a heat source, nearly every day.

That does not work so well when the rain falls, but no one complains. Israel is reclaimed desert, and reclaimed desert is still desert. Most of the country’s water comes from the Sea of Galilee, and if it falls below a certain level, the country has to shut off its taps. When, after a good rain, the Sea of Galilee rises to any extent, the people cheer, the way Americans cheer a good day in the stock market. These people know what’s important!

Israel already plans to take water from the sea, by removing the salt.

An Israeli speaks out

[…] Caesaria Maritima (Israel, Day 3) – Conservative News & ViewsMay 9, 2011 … Caesaria Maritima was Herod’s pleasure city, then the Roman capital, and finally a Crusader Kingdom. Its theater is in use today. […]