Our government officials are now acting like the villains in Atlas Shrugged. What’s more, they’re chasing after anti-villains that don’t exist.

What was Atlas Shrugged about?

In Atlas Shrugged, the economy was falling apart, and the government was trying one tax or “directive” after another to stop the bleeding. The government even tried a complete command-and-control structure, trying to freeze the economy in place. (Economies are not foodstuffs that you can freeze to keep from spoiling. But try telling that to some people.) The smart, resourceful, and independent people were quitting their jobs, or even their businesses. Toward the end, the government had “morale conditioners” to control the press. Not that the press needed any persuasion; no independent alternative press existed.

Sound familiar? It should. Richard M. Nixon tried the “Ninety-day Wage and Price Freeze.” President Obama has already done a lot of other Nixon-like things. Maybe he’ll try next to freeze wages and prices. The government already is in the car business. (It has been in the railroad line for decades, after the last passenger railroads died.)

But one thing is happening in Atlas Shrugged that is not happening—yet—today. The smart, resourceful and independent people in the novel were quitting—because someone was telling them to quit. Today, if anyone is quitting, he does not need anyone to tell him.

Who are the villains today?

The villains in Atlas Shrugged are not hard to spot in today’s headlines. Mr. Thompson? Obvious: Barack H. Obama. Not only because he’s the President, but also on account of what kind of President Obama decided to be. Obama even said that he found the Constitution incomplete: that it was

Obama went on to say that he would redistribute wealth, by legislation if not by court action.

For James Taggart, read Jeffrey Immelt of General Electric. Ask yourself why GE didn’t pay any taxes in 2010. Immelt is a government crony. He sits on the President’s Jobs Council. James Taggart, in Atlas Shrugged, sat on the Bureau of Economic Planning and Natural Resources. 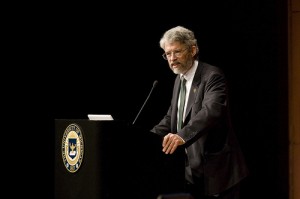 And let’s not forget Floyd Ferris, Assistant (make that Actual) Director of the State Science Institute. Meet John Holdren, Science Czar, who famously wanted to put something in the water so that women wouldn’t have any more children. (Holdren’s recent denials read like the denials that appeared in the controlled press in Atlas Shrugged. You could always tell what was really happening by what the newspapers insisted was not happening.)

Is there a John Galt?

Meaning: is someone running around telling people to down tools and vanish into the countryside? Not yet—more on that later. But RedState says that the Democrats are now accusing the Republicans of something like that. They are throwing around words like sabotage. They are saying that the Republicans are trying to collapse the economy in time for the 2012 election. They even say that Republicans in Congress are not doing their fiduciary duty.

Quite apart from the Democrats’ habit of throwing off on their opponents, fiduciary duty would lie in getting out of the way. Which brings us to:

Who are the heroes?

The heroes of Atlas Shrugged were not the Triumvirs of Atlantis (literally, “that which belongs to Atlas”). They were Henry Rearden and Dagny Taggart. Rearden kept his business going until he realized that he was only keeping looters afloat by doing it. So he finally walked away, and was ready to when a Triumvir showed up in his office. Dagny Taggart kept trying to tell those same looters to “give up and get out of the way.” She walked away when they would not listen.

Today, any commentator who has ever told the government to “get out of the way” of productive people, recalls Dagny Taggart’s struggle to get the government to see reason. Furthermore, when you hear businesses saying that they will hire when they know that government policies won’t break their banks later, you have found Dagny Taggart among them.

On the other hand, you may spot a Henry Rearden among the people, very easily. When you see any business tells its bone-headed state government that it will move to a tax-free State, as Caterpillar, Inc. just told the State of Illinois, you have just found Henry Rearden.

Now about those Triumvirs, the anti-villains of Atlas Shrugged: they don’t exist, or at least, not yet. There is no John Galt, no Francisco d’Anconia, and (the “Progressives” had better thank their lucky stars) no Ragnar Danneskjøld. We don’t need them. People are figuring out for themselves that command-and-control economies don’t work. They need no Triumvirs to tell them that.

And Atlantis today is any State that does get its government out of the way. Voters know it. That’s why Obama is trying to kill Texas, just as Mr. Thompson and his buddies killed Colorado in Atlas Shrugged. Only this time they can’t.

Who is John Galt? You are. You don’t need anyone to tell you that socialistic policies do not work. You can see it all around you. When you act on what you see, you have done all that John Galt or either of his friends could have done for you.

And Atlantis is where you decide to build it. You don’t have to hide. (At least, not yet.) Cast your vote, while you still have a vote to cast, for human liberty without compromise.

Excellent essay. I marveled how Rand was so prophetic in her writing, right down to the sycophant media and even directives from the government on what the masses should consume for food(recall the great soybean fiasco in Louisiana while the wheat crop rotted in Minnesota). But I believe you’re right, there will be no John Galt needed for America to right the ship. All the slogans, empty speeches and downright lying by this administration have been exposed time and again over the past year, beginning with the way the health care bill was rammed down our throats. We’re not the Peoples State of France, Italy or even England. Come November 2012 that will be clearly evident to this administration and the rest of the world.

It strikes me as queer how modern (religious) conservatives espouse the views of objectivism and praise Atlas Shrugged and other works by Rand. Supposedly these are the men and women who fight for moral causes, Biblical principles, etc.

Nothing is more anti-Biblical than objectivism. Objectivism is a political philosophy designed around selfishness and lack of empathy. One could even say that it exists to legitimize an otherwise repugnant aspect of human nature.

The Bible on the other hand, specifically the New Testament, is full of parables which are flatly contrary to this. Who could forget the parable of Lazarus? The one about the rich man who wished to become a disciple of Jesus? Making as much money as possible, and caring nothing about society except for how it benefits you is NOT Biblical. It’s not even ethical, or wise.

Now I will admit that what the Bible says means little to me personally, but I think it very strange, very contradictory that religious men and women are standing behind something so contrary to their faith. It says a lot for how ignorant, or perhaps selfish and cynical they are.

[…] who say things like that have no idea what a real Tea Party “terrorist” might do. Ayn Rand did. Such a “terrorist” would not threaten; he would act. He would not merely talk; he would fight. […]

[…] Rand (Atlas Shrugged) made the same mistake. This, among other things, caused her to reject God completely. She declared […]