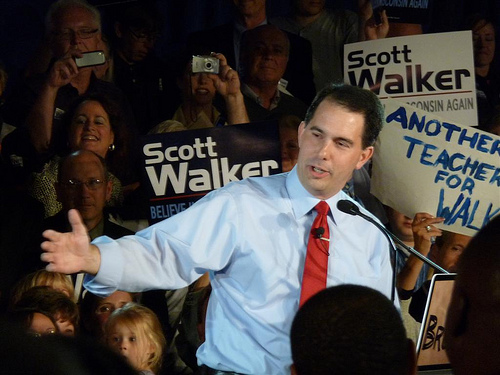 Scott Walker won a victory in the Wisconsin Supreme Court today—for Constitutional separation of powers between courts and legislatures.

What did Scott Walker win today?

Governor Scott Walker (R-WI) won a ruling in his favor  from the Wisconsin Supreme Court. The Court ruled today on whether his new law curtailing collective bargaining by government employees was valid. At issue: whether the legislature, in its seeming haste, had broken Wisconsin’s open meetings law by giving less than 24 hours’ notice before voting on the final bill. A lower court said earlier this year that the legislature had acted improperly, and forbade the governor to publish and enforce the new law.

By a vote of 4 to 3, Wisconsin’s highest court said that the lower-court ruling was void ab initio (void from the start). The majority opinion held that:

Today’s report came from the Milwaukee Journal-Sentinel. Human Events filed this report, citing other reports from the Associated Press and The Wall Street Journal.

For one thing, government employees, other than police officers, firefighters, and State Patrolmen, will lose their rights to strike and force wages to budget-breaking levels. So Scott Walker has won a victory for fiscal sanity in his State. That alone would be a good example to set.

But Scott Walker has set an even better example. The federal judiciary, and the judiciaries of many States, have grabbed power for themselves from legislatures and executives since the original thirteen States ratified the Constitution. Today, for the first time, a State Supreme Court acted differently.

The three branches of government have separate powers for a reason. Each branch must act as a check and a balance on the other two, so that dictators cannot arise. This spring, a lower-court judge had asserted dictatorial powers by telling a legislature how to enforce its rules.

The Open Meetings Act applied to agencies of the executive branch. It did not and could not apply to the legislature itself. Any legislature makes its own rules for how it does its job. The US Constitution says that explicitly. So does the New Jersey Constitution. And so does the Wisconsin Constitution. (See Article IV, Section 8.)

So when a Wisconsin Assemblyman on the losing side of the argument said that the Assembly was breaking the law to call a meeting with less than twenty-four hours’ notice, he was talking through his hat. The only thing that set any needed time for meeting notice was the Assembly Rules.

The lower court presumed to tell the legislature that a statute was binding on it. The Justices of the Supreme Court, when they heard oral argument, clearly thought otherwise. At one point the justices said that anyone hoping to prevail on the merits of that case would have to amend the Constitution to do it.

What does that mean for other States?

Scott Walker has thus set an example, not only of good money management, but also of standing up for the Constitution of his State. Chris Christie of New Jersey could profit from this example. New Jersey has a rogue Supreme Court that recently passed an appropriations bill by judicial fiat, not by any debate of representatives of the people. The Wisconsin Supreme Court has clearly shown that it would never do that, and will not let a lower court do anything like that.

But why the Wisconsin Supreme Court acted as it did, is just as instructive. Justices of the Supreme Court must stand for elections—contested elections, to boot. This is even stronger than the retention elections that former Senator Richard J. LaRossa and others say that New Jersey needs.

Those who worry that elections will throw sordid politics into a high-minded judicial process, worry about the wrong thing. If any entity must be sovereign, and responsible only to itself as to the wisdom of its own acts, that entity must be the people. And if “with great authority comes great responsibility,” then the people must make sure to educate the next generation so they know to protect the most important principles that protect their freedom.

Scott Walker did the country a valuable service today. Only a man brave enough to throw his career on the mercy of the proper sovereign of a free society—the people—could have done what Scott Walker did. For that, the people everywhere in the United States should thank him.

About time! We the people in the private sector pay for the salaries of public employees. Without us there would be no public sector workforce at all. The governments have no money. It is confiscated from one to give to another.
How about we privatize ALL jobs except only what is necessary under the U.S. Constitution for defense. This way we create more producers and remove the non-producers (IE public workforce)….