The media have joined the debt ceiling battle by saying that even new Congressmen have debt, so debt is acceptable. They ignore several crucial differences between the debts of the freshman Congressmen they attack, and the national debt.

What are the media saying?

Specifically, The Washington Post looked at the disclosure forms that every new Member of Congress must file. They published a story with this headline: “Some Republican freshmen in Congress hold major debt.” How major? One new man—Representative Blake Farenthold (R-TX-27)—has unsecured credit-card debt in a range from $45,000 to $150,000. (The form probably has a check-off line giving that range; the Post cannot say that Farenthold actually carries $150,000 in credit card balances.) More to the point, at least 30 new Members have more than $50,000 in liabilities, not counting mortgages on their homes.

What has this to do with the debt ceiling debate?

Just this: the Post is saying that Farenthold and his colleagues “[take] a more nuanced view” of debt than their rhetoric suggests. Nuance is a favorite liberal word. It means a subtle hint of socialism (or pacifism) that escapes the unwary. In plain English, the Post means that no one who carries as much debt as some of these freshmen are carrying, has any right to tell the federal government to turn tightwad. They also propose that the government’s debt isn’t even as great, as a portion of the total assets that the country holds, as the debt that these freshmen carry. And for that reason, a rise in the debt ceiling would not be the profligate gesture that these freshmen say it is.

But are these freshmen in the same spot as the government?

No. First, the debt-to-asset ratio is only one way to tell whether someone is carrying too much debt. The debt-to-income ratio is another. A Member of Congress earns at least $174,000 per year. By taking care not to spend too much, even if Blake Farenthold had unsecured debts of $150,000, he could pay those off in two or three terms in the House and one in the Senate. (And that assumes that his caucus will never make him a leader, who earns a higher salary.) Part of being sensible would be not asking for any raise in his own debt ceiling, which is the sum of his credit limits.

Second, those Members might each have racked up that debt to run for Congress. The Post never bothered to check what any given Member spent the borrowed money on.

Third, what Member of Congress takes out loans from several banks in several parts of his district or State, and then buys his own loans without actually paying them off? That is what the federal government does. Any business that bought its own “commercial paper” would see its executives land in prison.

Fourth, what person or company, other than the government, can raise its own credit limit? That is what raising the debt ceiling would mean.

In fact, the total national debt amounts to $46,173.41 for every man, woman and child that is a citizen or lawful resident of the United States. And in a “reverse tontine”, when a citizen dies, the rest of us inherits his share of that debt. By what right did those who racked up that debt, saddle future generations with it? That also is what raising the debt ceiling would mean.

When is personal debt wise to get into? 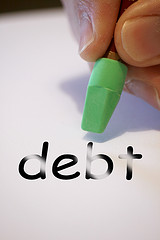 We should be erasing debt, not incurring more. Photo: Alan Cleaver, CC BY 2.0 Generic

Any money coach will name three, and only three, good reasons to borrow a large sum:

Now what is the government doing? It is borrowing money to do things that will not raise revenue, and many of its assets lose value. Raising the debt ceiling would let the government go on doing these things, when it must stop.

The Washington Post is up to its usual cheap tricks. It doesn’t rise to the level of recruiting amateur opposition researchers against Sarah Palin, but it comes close.

The Media Research Center says that the Post was wrong to ignore another spectacle: Rep. Nancy Pelosi (D-CA-8) grew richer by 62 percent in the last session of Congress. The MRC has a point: if growing richer in office is wrong, then that rule should apply to Democrats as well as to Republicans. But that is not the Post’s big sin. The greater wrong is that the Post made an apples-to-oranges comparison of several freshmen in Congress with the national government, to excuse, or even justify, a rise in the debt ceiling. They must be very desperate to pull a stunt like this.

(Full disclosure: your editor has no mortgage, nor ever bought anything with a credit card that he could not pay off in full in the next cycle.)

Neither a borrower nor a lender be,

For loan oft loses loan as well as friend,

And borrowing dulls the edge of husbandry.

Featured image: a householder during the Weimar Republic wheels a barrow full of Reichsbanknotes to the corner grocer to buy a loaf of bread.