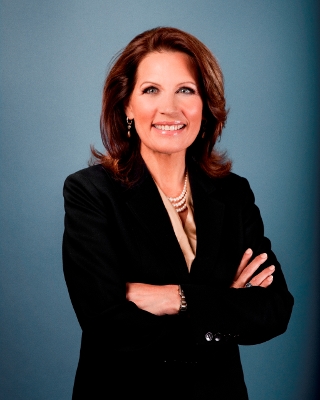 Michele Bachmann has started her run for President yesterday, and needs to trump the distractions from her opponents and the media.

First, Fox News Channel’s Chris Wallace inexplicably called Michele Bachmann a “flake” on his show the day before. (He apologized afterward.) Then, after she announced, President Obama scheduled a trip to Iowa. (CNAV has raised questions before about Obama’s habit of using the Presidential plane as his campaign plane without reimbursing the taxpayer.) And—the kicker—all that the old-line media have wanted to talk about is her statement that John Wayne was born in Waterloo, Iowa, her hometown. (Actually, Marion Robert “Duke” Morrison, also known as John Wayne, was born in Winterset, Iowa, on May 26, 1907. Waterloo’s most notorious resident, John Wayne Gacy, was not born in Waterloo, but in Chicago, Illinois.)

What about the real Michele Bachmann?

Only two organizations are talking about what matters most: where Michele Bachmann actually stands. One is the Club for Growth. Today they released a “white paper” on Michele Bachmann. This document lists her votes on eight subject areas, and her endorsements of other candidates.

In her last twelve years as a US Representative and as a State Senator, Michele Bachmann has cast a few votes that the Club for Growth might find too parochial for their taste. But she has improved that record to near-perfection in the last three years. She is a consistent advocate for low taxes and spending, fewer entitlements, less regulation, school choice, tort reform, and for the freedom of people and companies to support the candidates of their choice.

On the issue of free trade, your editor disagrees with the Club for Growth. Asking the managers of government construction and other projects to “buy American” is no less logical than for a private company to use its own products and services for its own operations. (That’s like IBM using its own typewriters and copying machines instead of buying them from Royal or Xerox.)

The other organization is NumbersUSA, the foremost group for slowing down immigration. They give Michele Bachmann a B minus, the highest grade in the “class.” They praise her for opposing amnesty, voting for the “E-Verify” system, and calling for an end to “birthright citizenship” for children born in-country to parents who are not lawful residents. (By the way, Chris Christie, who is not a Presidential hopeful, would get a failing grade if he became one.)

How is Michele Bachmann really doing?

This Gallup poll, out today, shows that Michele Bachmann has the best combination of name recognition and “positive intensity” (strong-favorable minus strong-unfavorable) of any Republican candidate. She is as well-liked as Herman Cain, and is better-known. No other candidate is nearly as well-liked. (Newt Gingrich, Ron Paul, Mitt Romney, and Sarah Palin are better-known, but far less well-liked.)

Michele Bachmann has often delivered “zingers” in the past. In November of 2005, she declared that “not all cultures are equal” in a discussion about young Muslims rioting in France. In June of 2009, she coined the phrase “gangster government” in a hearing about the government’s takeover of General Motors Corporation. In August of 2009, she shot back at a male heckler,

I’ve given birth here more times than you have, sir.

This was after she held forth on the substandard care that women in labor get under the UK’s National Health Service.

She’ll have to be as outspoken as this, to handle the abusive distractions that are sure to fall into her path during the campaign. The old-line media have declared war. Michele Bachmann answered them back long ago.

Related Topics:candidateelectionmediapresidentTea Party
Up Next

Chris Christie has a Muslim problem

There is an interesting point by point article at salon.com

Michele Bachmann represents everything that is wrong with conservatives. Her ideas are old, and proven not to work. She continually makes baseless assertions, that can almost always be proven false with even the most cursory fact checking. She’s shrill and inarticulate when speaking, generally failing to answer even the simplest questions. Her staff turn-over rate is dazzlingly high, and most of her former employees seem to paint her out as half psychotic, half incompetent when they speak about her performance as a representative.

Basically, she’s an idiot, and I could not imagine a worse candidate for president. I personally cannot tell who is stupider, Palin or Bachmann, but it scares me senseless to see people actually supporting either of these morons. Neither understands basic American history, and instead believes in a fairy tale that they’ve made up in their own heads. The consequences of either in the White House would be disastrous.

Unless Ron Paul gets the nomination, Barack Obama will win a second term easier than Bush won in 2004. He has no other serious opposition.