The New Jersey Assembly yesterday passed a Senate bill to force New Jersey to stay in RGGI, but not with enough votes to override a veto.

The vote on A4108/S2946 was 43 to 34, with 3 Assembly members not voting. (A detailed roll call was not available at posting time.) Yesterday the Senate passed the same measure, 41 to 38 with 1 Senator (Andrew Ciesla, R-Monmouth) not voting.

Why did Governor Christie pull out of RGGI?

Governor Chris Christie said he pulled out of RGGI (the Regional Greenhouse Gas Initiative) because the 10-State compact had failed in its mission to reduce greenhouse gas emissions. His real reason for pulling out might have been that the quarterly RGGI auctions were no longer bringing in such vast windfalls. In fact, RGGI’s most recent quarterly auction was an epic fail. It sold only 30 percent of the carbon dioxide permits up for sale, at $1.82 per ton—the reserve price. When RGGI’s auctions did better, Christie was using the extra money to close the State’s budget gap. (The Assembly passed one bill, that the Senate has not yet voted on, to forbid Christie to do this again. RGGI’s auction proceeds are supposed to go to green-energy projects only.)

He should have pulled out of RGGI because it is unconstitutional. Article I, Section 10 forbids States to enter into compacts like these.

Can the Legislature override Christie’s veto? 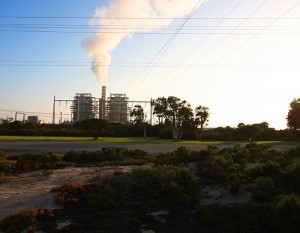 Not unless they can somehow switch several “no” votes to “yes” votes. Each body of the Legislature needs two-thirds of its members to override a governor’s veto. The Senate needs 27 votes; the Assembly, 54. The Senate would take the first override vote, because the Senate passed the measure first.

The pro-RGGI side has only 21 votes in the Senate. Even if Andrew Ciesla voted for it this time, the pros would need five more votes. Even some Senate Democrats, among them Paul Sarlo of West New York, voted against this bill. A Paul Sarlo represents ratepayers, not environmentalists—and Democrat or Republican, he can ill afford to ignore their concerns.

The Assembly would have an easier time, at least in proportion. The “yes” side has 43 votes, and could pick up 46 more from non-voters. It would still need eight more votes.

So Christie does not have to accept this proposal. Whether New Jersey remains a part of RGGI is up to him, and him alone. The only reason why he might sign the bill anyway is that he is still a global warming alarmist. But the money isn’t there, and even if it were, the Legislature now proposes to tell him how to spend it. Therefore he is likely to veto the bill.

Is RGGI safe even if Christie stays?

No. At least one resident of New York State is suing her State. She says that New York’s participation in RGGI is extralegal and unconstitutional. If New York pulls out, RGGI is doomed.

And if Christie does sign this bill, the New Jersey Tea Party Caucus has already vowed to sue the State to block the law, on federal Constitutional grounds.

The Simple Miracle of America

Specifically, the RGGI compact is prohibited under Article 1, Section 10, Paragraph 3 of the United States Constitution which states.

No State shall, without the Consent of Congress,
lay any Duty of Tonnage, keep Troops, or Ships of
War in time of Peace, enter into any Agreement or
Compact with another State, or with a foreign Power,
or engage in War, unless actually invaded, or in
such imminent Danger as will not admit of delay.

This is also why the “Confederate States of America” compact was null and void. When one breaks the sentence down into its components related to RGGI you get

No State shall, without the Consent of
Congress,enter into any Agreement or
Compact with another State.

This is why it is so important for people to understand English and what the words actually mean, American history and be involved. Schemes like RGGI are not about pollution and helping the environment but control of people’s lives.

The U.S. Constitution can be found online at

Both have lots of good historical documents.

[…] the Tea Party here in NJ informed you that they understood RGGI (New Jersey’s own global warming hoax) for what it is, nothing more than a hidden tax on the […]