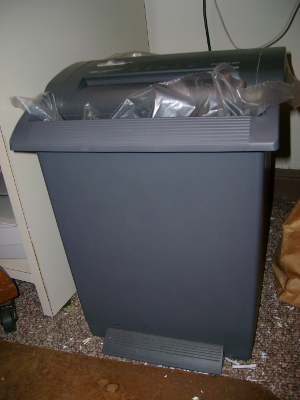 The government is still trying to cover up Operation Fast and Furious—and a Tampa source says that the ATF office is destroying documents.

The only ones seriously looking into Operation Fast and Furious are the House Committee on Oversight and Government Reform, and the Republican delegation of the Senate Committee on the Judiciary. Three days ago Darrell Issa at House Oversight, and Charles Grassley, Ranking Member at Senate Judiciary, published this open letter to Attorney General Eric Holder. David Codrea, Mike Vanderboegh, Kurt Hofmann, William Lajeunesse (Fox News), and others have all mentioned the most sensational thing that the letter reveals. Namely, that US taxpayers bought many of the guns that the government effectively “threw down” in Mexico. Some of the buyers and “end users” of these weapons were paid DEA and FBI informants. Stimulus money went to buy other weapons.

But the letter also speaks of cover-up. First, no one told ATF Acting Director Kenneth Melson that he could talk directly to Members of Congress with his own private lawyer present, on his own time. No one, that is, until some House Oversight employees told him that he had that right. Melson accepted the obvious offer at once. He even came on July 4, a legal holiday. A furious Issa reminded Holder of the law that protects Executive Branch employees who want to talk to Congress.

Second, Melson told Issa and Grassley that he reassigned every ATF manager that had any part of Operation Fast and Furious. But the Justice Department forbade him to tell Congress why he had to reassign those people. Here Issa went beyond a mere suggestion and accused Holder flatly of obstruction of Congress.

If his account is accurate, then ATF leadership appears to have been effectively muzzled while the DOJ sent over false denials and buried its head in the sand.

Third, Melson confirmed to Issa and Grassley that the DEA and the FBI also had roles in Operation Fast and Furious. Melson also said that he told two senior DOJ officials about this in April, and then in the middle of June. Why didn’t the DOJ stop this?

Issa blamed the actions of the three agencies, and the refusal of higher-ups to share information, for Border Agent Brian Terry’s death and other tragedies that this program has already caused. Even before Melson came to see him and Grassley, Issa chided the President for being less than willing to answer some obvious questions.

The American people expect more from the President than unsubstantiated assertions that the Attorney General didn’t know about this reckless program and no explanation about who authorized it.

But even he seemed to be most furious at the cover-up. He said that the operation was “misguided”—or in short, an honest mistake. Codrea and Vanderboegh know otherwise.

Latest on the Honduras connection

Late last night, Codrea and Vanderboegh’s source in the Tampa ATF office gave them an electrifying tip. ATF Special-agent-in-charge Virginia O’Brien has ordered weekend meetings on how to cover up her own illicit operation to run guns into Honduras. And in a scene right out of a bad Enron movie, “the shredders are buzzing.”

Vanderboegh wrote this open letter to Melson, urging him to fire O’Brien and her assistant at once.

[T]his cover-up is going on right under your nose, and, if you indeed are still the Acting Director of ATF, you have the responsibility to stop it immediately.

What are people saying about this?

Representative Allen West (R-FL) said yesterday that President Obama needs to fire General Holder. If he does not, then he is just as guilty, West said.

Vanderboegh sees something else at work: a frantic effort by some commentators to save the meme that too many guns are flowing too freely. To suggest that, they keep saying that ATF has been rudderless since it has only an acting director. (Never mind that General Holder might have brought Melson in to set him up to take the blame.) This post in Politico.com is typical. It quotes Paul Helmke, head of the Brady Campaign, as saying that ATF is “weak” and that if it doesn’t get a permanent director soon, it might as well disband.

Now folks, when rabid anti-gunners like Helmke get around to accepting the ATF’s demise, you’ve got to ask yourself why. The answer? They are protecting the larger mission—both the Obama administration and the gun control mission. This scandal is so bad, they know they’ll have to give up something. But they also know that the firearm laws of the United States are not going to be repealed anytime soon.

Vanderboegh, Codrea, and the others have already shown that the scandal goes far beyond ATF. Even Congress—or at least, those in Congress who care to know—know it.

What is the gun control mission?

That mission has several parts. One is the United Nations Small Arms Convention. That will come before the Senate next year. The Senate must never ratify it. Happily, the Supreme Court, in an unrelated matter, said in 2008 that no treaty can trump a person’s rights, or a State’s rights, under the Constitution.

But another part of the mission is to repeal, or merely to ignore, the Second Amendment.

Consider: President Obama and his closest advisers said for years that the overwhelming largest part of the guns in Mexico came from the USA. Then came evidence that a much smaller portion came from the American Southwest. Furthermore, the drug cartels were getting their munitions from Central America, not the USA. And now we know that the guns were getting into Honduras—from the USA. How convenient. Except that the United States government threw those guns down in Honduras, so that they could say that gun-crazy America was the small-arms supplier to every dangerous criminal in Latin America, or at least in Mexico.

Mexican authorities now know enough about the true source to demand that the USA extradite its own officials to Mexico to face trial there. That aside, Congress surely has enough evidence to remove some “civil officers” from office on impeachment for, and conviction of, offenses tantamount to treason.

A Journalist’s Guide to Project Gunwalker, Parts One, Two, Three, and Four

Fast and Furious is not Gunrunner

this goes far beyound holder ask yourselves why this didn,t
start until obama an hilery came up with the small arms treaty with the u n it was designed to get more support in
congress an the senate to push it through just like they did obamacare
obama will go to any leanth to get what he wamts an rhat is one world government

First comes the disarmament, then comes the cleansing. Are y’all really foolish enough to believe you have any place in their “new world order”? Their dilusional utopia? Is it too hard for any of you to comprehend that you’re childrens’ lives and freedom are in jeopardy? In your cowardice you willingly damn posterity. The cold blade of tyranny is at your throats, yet you sit idle. Remember these words; woe to the conquered. For whoever shall allow themselves to be conquered, they are deserving of the cruelest fates.

Fast and Furious is not Gunrunner - Conservative News and Views

[…] “Ten million dollars, and one of the ways they were spending it was a paid FBI informant who was a drug dealer they had flipped. So he was buying lots of guns with that stimulus money,”Pratt said. […]

[…] was a drug dealer they had flipped. So he was buying lots of guns with that stimulus money,” Pratt said. […]

[…] that sounds familiar, it should. Charles Rangel might want to check further into Operation Fast and Furious before he accuses modern wealthy men of doing what the government itself has […]