Mitch McConnell, who signaled surrender on the debt ceiling, found some defenders. They also need the courage to stand up to threats.

What are the threats on the debt ceiling?

Barack H. Obama has made two kinds of threat since he started talking about the debt ceiling:

James Taranto at The Wall Street Journal gets it. Yesterday Obama held a metaphorical gun to the heads of the nation’s grandmothers, threatened to shoot, and demanded a ransom. He also demanded, in yesterday’s press conference, that Republicans agree to massive tax increases in 2013. That would fall after the next election.

Sadly, The Wall Street Journal editorial board does not get it. They think that Mitch McConnell is right to hand the Republicans’ head to the Democrats. The reason: they don’t understand that that’s what McConnell is doing. 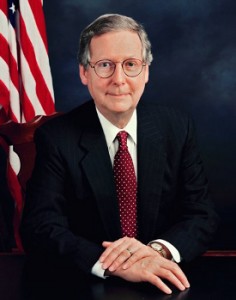 Senator Mitch McConnell (R-KY), the Republican Floor Leader, made an impassioned speech on the Senate floor yesterday. In it he said that he would not help the Democrats pretend that a bad deal was a good one. Mitch McConnell said in effect that Republicans would now take back the sanction of the victim. (See Atlas Shrugged by Ayn Rand for details.) This could have been a defining conservative moment—if McConnell had meant what he said.

But what he said next made no sense at all in that context. He proposes to authorize Obama to ask for three successive rises in the debt ceiling. Those rises would take effect at once unless Congress, by a vote of two thirds of both houses, disapproved. (Congress could disapprove by simple majorities, but Obama could veto that and get his debt ceiling rise anyway.)

The McConnell plan amounts to this: Go ahead and raise the debt ceiling; we’ll let you do this and blame you for it later. McConnell does not realize that by letting Obama do a thing, Congress helps him do that thing. The Wall Street Journal editors don’t realize that, either.

A closer look at their defense of McConnell is in order. Their very headline is off-base: “Debt-limit Hara-kiri.” First, the correct Japanese term is seppuku. Second, if the Republicans would die politically by forcing the debt ceiling to stay where it is, they will still have done the country a service. So if any Japanese term for martyrdom applies, then it would be kami-kaze (Divine Wind), or maybe Hisatsu. (That’s what those pilots used to shout before they hit their targets.) Not seppuku and certainly not the more vulgar hara-kiri.

The Journal says that Republicans would not be on Obama’s wing as he raised the debt ceiling. How could they not? They don’t have to let the debt ceiling rise at all. By letting it rise, they agree to his threats and lend credence to his arguments. And that without benefit of a hearing. What kind of Congress do we have?

The debt ceiling is going to [rise] one way or another.

How, unless Republicans, especially in the House, let it happen?

To hold the debt ceiling fast, of course. Then Obama has to decide what programs to cut. Let him cut people off. Let him stop meat from getting to market. Let that be on his head. In a year and four months, we’ll settle the hash in the election.

[A balanced budget amendment] won’t get the two-thirds vote to pass the Senate, but it would give every Democrat running for re-election next year a chance to vote for it and claim to be a fiscal conservative.

Yes, and that vote would come up two years from then, and two years after that, if it had to. Sooner or later, every Democrat must stand up and let the voters count them. And giving away the store now on the debt ceiling is not the way to propose a balanced-budget amendment.

Yes, and if the Republicans let the debt ceiling go, entitlement reform will never happen.

Michelle Malkin, Erick Erickson, and others “get it.” Erickson said that McConnell just wants to wash his hands of the debt ceiling, as Pontius Pilate, Prefect of Judea, washed his hands of another Important Matter. Michelle Malkin put the matter more graphically:

Let us close the curtain of charity on the rest of the [quote].

Featured image: a Weimar-era householder wheels a barrow full of worthless paper scrip to the corner baker to buy a loaf of bread.

Why was it okay for St. Reagan to raise the debt ceiling and increase spending?

Yo, good lokoin out! Gonna make it work now.