If a certain New Jersey State Senator has her way, New Jersey will go at once from the easiest State for homeschooling to the hardest.

Details of the homeschooling bill 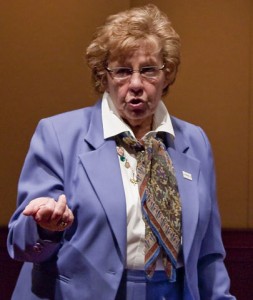 NJ State Senator Loretta Weinberg, in her days at the College of New Jersey. Her extension of her right hand, with the middle finger slightly up-raised, might or might not be significant. Credit: User Bbsrock/Wikiedia, CC BY-SA 3.0 Unported License

The Weinberg bill orders all parents and guardians of homeschooling pupils to file at least three documents with the superintendent of the school district in which they live:

Furthermore, no child having a case open with the Division of Youth and Family Services (DYFS) may home-school, unless DYFS allows it.

Problems with the homeschooling bill

The problem, according to HSLDA, is that the portfolio includes without limitation the materials that the bill describes. Furthermore, the bill would give the New Jersey Board of Education unlimited power to regulate homeschooling, power that it does not have under current law.

The State Board of Education shall promulgate rules and regulations pursuant to the “Administrative Procedure Act,” P.L.1968, c.410 (C.52:14B-1 et seq.), which are necessary to effectuate the provisions of sections 1 and 2 of this act.

HSLDA interprets that this way:

It [the Board] could define homeschooling itself. There is virtually no limit as to what the Board could require in the annual medical exam. No issue – no matter how personal, sensitive, unwelcome or intrusive – would be off limits.

The bill would also be an administrative nightmare, and yet another taxpayer boondoggle in a State well-known for bureaucratic waste:

With three filings every year for 42,000 homeschooled children, overworked public school staff would have yet more burdens added to their shoulders. Taxpayers would pay the cost of filing, processing, checking, responding to, and storing 120,000 sets of paperwork each year. Taxes will inevitably go up to pay for it.

HSLDA and Americans for Liberty believe that this bill is Loretta Weinberg’s answer to a tragic child-abuse case. On or before May 22, authorities found Christiana Glenn, age 8, dead in her parents’ home in Irvington, NJ. The Essex County Medical Examiner listed the causes of death as malnutrition and complications from a broken leg. Senator Weinberg and her colleagues made much of the Glenns’ decision to home-school their daughter and two other children. (See these four reports in The Star-Ledger of Newark, plus this Letter-to-the-Editor criticizing Weinberg for making too much of the homeschooling angle.)

This is a classic example of making law in response to a tragic case, without regard to its consequences. (Or perhaps Senator Weinberg knows perfectly well what the consequences will be, because she does not want any children to home-school at all. Her record of casting suspicion on homeschooling goes back at least seven years, to before she entered the Senate. Furthermore, the animosity between Weinberg and the homeschooling population is mutual and of long standing.)

The Star-Ledger did not run an editorial on the Glenn case. But in article after article, the S-L‘s reporters blamed DYFS, not the homeschooling concept, for Christiana Glenn’s death. At issue: an anonymous tipster telephoned DYFS to describe a suspicious circumstance. The DYFS operator, by her own admission, “blew off” the call. No one regrets that choice more than she, in light of the child’s death.

HSLDA and AfL accuse Weinberg of seeking to punish parents because DYFS failed to catch a case of child abuse before a child died. But CNAV sees another motive. Rahm Emmanuel, former White House Chief of Staff and now Mayor of Chicago, IL, famously said:

Loretta Weinberg seems to have that maxim down pat.

The bill would not make children any safer

The Weinberg bill will not make children any safer. First, even an annual physical examination would give a child only one point-of-contact per year by a responsible, non-related adult. Second, even children in public or accredited private schools have contact with responsible, non-related adults only nine months out of the year. (Will Weinberg next push to abolish summer vacation? Stay tuned.) Third, as letter writer Sue Ferrara pointed out, this bill would do nothing about “latchkey kids,” who typically come home after school to an empty house or apartment because both parents are away at work. At least a homeschooling pupil will have a responsible adult with him or her all day long.

HSLDA and AfL gave the names, addresses, and office telephone numbers of several responsible Senators. They include:

See also this blog entry containing another copy of the HSLDA alert.

Related Topics:educationlibertymediaTea Party
Up Next

What? One kid dies from malnutrition in a family home where the kid was being homeschooled and the New Jersey nutcase politicians want unlimited legislating powers when it comes to homeschooling? Give me a break! Any intelligent person knows that you CANNOT guarantee 100% safety…EVER! To try to is to basically invite tyranny to ruin your nation. I’m not saying that children are in no need of safety from abusive parenting or that they do not need loving care because they obviously DO, but these laws go too far. If the bozo Senator wishes to be credible, there would need to be proof that homeschooling in and of itself directly causes these cases to occur. There would need to be MANY cases of this occurring. The other thing is, how do these people know even know if THIS case was caused by the homeschooling and not from something else that was well-hidden? People just don’t THINK anymore! So sad.

You got it. Actually, that Senator is thinking all right—about how to gain control of every minute of a child’s life.

I think I’m on board with Terry on this one, for once. Requirements (1) and (2) aren’t all that unreasonable, but the requirement of an annual physical goes too far. If they’re going to require it of homeschool children, it should be required of all children and school obviously aren’t going to go that far.

Aha. You see an inconsistent law, or worse: a selective law. (The Framers of the Constitution had a word for that. It’s called “bill of attainder.” That makes the Weinberg bill unconstitutional.)

Actually, the public schools do require some kind of medical examination schedule. More to the point, they have an immunization schedule. Immunization goes slightly beyond the scope of this article, but is still on-topic: does a patient have the right to refuse treatment? Since when do doctor’s orders carry the force of law?

I can’t think why anyone would WANT to refuse immunisations. Not getting your children vaccinated is ignorant, selfish and dangerous.

Doctors’ orders have often carried the force of law. It’s a routine and sensible response to infectious disease.

Your argument assumes that an artificial means for active acquired immunity is totally without side effect, or at least is never, repeat never, worse than the disease it is ostensibly designed to prevent. Statistic evidence is accumulating already that suggests otherwise.

And who are you to tell someone else what danger he is running, or ought to expose himself to? Seems to me that you reprove me in one case for telling other people what choices they make in private, and then reprove others for making certain other private choices of which you do not approve. Make up your mind, sir.

Interesting article but, no mention of the possible support for the bill. Is this just one nutcase with an agenda or is she introducing a bill that has a lot of support? Any traction in the legislature?

Also, it seems to me that comments that induce flame on a discussion thread seem to die when ignored. Just sayin’.

[…] has her way, New Jersey will go at once from the easiest State for homeschooling to the hardest.www.cnav.news/…/homeschooling-threat… Google Alerts – […]

Government ruined the Public School Education, and because of Agenda 21, they are now going after the Home Educators. If NJ has a home school lobbyist be sure to support them. You might also get in touch with The Home School Legal Defense Association for help.

Most of the presidential candidates in both parties have supported agenda 21 except for three (Bachmann, Paul and Santorum) . So make sure you vote for the right people in the upcoming elections.