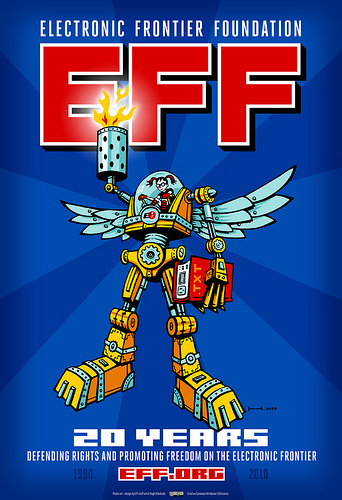 The massive Internet strike against the Stop Online Piracy Act (SOPA) prompted several Senators to oppose it. Its supporters “doubled down” and re-released their TV ads. And a curious coalition of conservatives and liberals has formed to stop it.

Results of the SOPA Strike

As of this posting, the administrators of the SOPA Countdown site have made no updates. The strike site has not changed, either. So no one has yet counted how many sites went dark for twelve hours.

But several highlights are available. Reddit started the strike and redirected all queries to a strike page. So did the English Wikipedia. Google merely blacked out their logo, but kept running; they merely hinted at what would happen if they withdrew their search engine. Thousands of smaller sites also took part. WordPress darkened most of the blogs they hot. They also made a plugin available to independent site administrators, like us at CNAV, who use WordPress to run our sites. The plugin redirected all visitors to the SOPA strike page for twelve hours.

The most important results were political. Before the strike began, forty Senators co-sponsored SOPA’s companion bill, the Protect Intellectual Property Act (PIPA), in the Senate. Yesterday, Senator Marco Rubio (R-FL) withdrew his sponsorship. Twelve other Senators did the same, or at least withdrew the support they earlier gave. (See here for the current “whip count” by OpenCongress.org. Warning: the page might be too busy to load.) Both New York Senators jointly promised to change it after several protesters camped outside their offices.

Support and opposition both cut across Party lines and even ideological lines. Liberals oppose anything that does a favor for a joint-stock corporation larger than a certain market capitalization. They see SOPA and PIPA as highway robbery of those who want “free” information, for the unjust benefit, not so much of individual artists, but of the studios and record labels. Conservatives have a more fundamental objection: SOPA and PIPA are unconstitutional bills of attainder that would let the Justice Department declare a site an “un-site,” just as George Orwell (1984) predicted that the government would declare someone an “un-person.” This is what independent writers fear most.

Let me make something very clear here. I hate pirates. I publish a copyrighted newsletter, and I have had to take action against people who posted material from that newsletter online.

But pirates, by very definition, operate outside the law. They’re gonna be with us pretty much no matter what. Stomping on the 1st Amendment and breaking the Internet in order to stop some pirates who will find another way to evade the law anyway seems pretty stupid to me. In other words, Congress shouldn’t mess with people like me in order to get at the pirates. It’s insane.

The supporting coalition re-ran their TV ads, which they stopped running a few days earlier.

The Wall Street Journal published this neutral guide to SOPA yesterday. Those who support SOPA want to shut down several BitTorrent, file-service, peer-to-peer, and other sites that offer downloads of films and songs (singles and albums). The Motion Picture Association of America (MPAA) and the Recording Industry Association of America (RIAA) say that those sites are pirate bazaars, no more, no less. (One of them boasts of this in its name: The Pirate Bay.) These sites carry content that is still subject to copyright, according to US and international law.

Under US law, copyright lasts for the lifetime of the author, plus 75 years. If the “author” is a company, then copyright lasts for 75 years only. But Congress has passed special laws that literally grant a privilege to the Walt Disney group to keep copyrights on their favorite characters far beyond the 75-year limit. (The word privilege literally means “private law.”) This might be why Senator Rubio sponsored SOPA/PIPA at first.

SOPA would grant standing to authors and other copyright holders to sue The Pirate Bay and other sites like it for wrongfully distributing their works without paying. It would also let the Justice Department to get court orders to:

Worse yet, the current version of SOPA would let the Justice Department de-list offending sites from the Domain Name Service (DNS). That’s the equivalent of the United States Postal Service holding up y our mail. It is the ultimate sanction against a site. George Orwell (1984) spoke of a government making someone an “un-person.” The Justice Department could make a site an “un-site” under this law.

The Case Against SOPA

Sally Kohn made the case against SOPA yesterday.

SOPA is a Pandora’s box of proposed regulations that would inadvertently make it easier for our government to censor the Internet. Current laws already allow owners of copyrighted material to get that content removed from unauthorized websites. But SOPA would mean entire sites could be shut down even for minor copyright infractions, a slippery slope that would undermine even good, legal content on the web and allow politically motivated witch hunts against entire websites.

This site listed eight different ways that SOPA would harm the Internet. The Chicago Sun-Times listed more ways and attacked directly the MPAA and RIAA arguments. So did Investors Business Daily.

The studios and record labels created a front group called CreativeAmerica.org. This group created a TV spot showing a light bulb, and someone smashing it while it was still on. A voice-over narrator says that foreign companies are “stealing American ideas and killing American jobs.” False and misleading. An unwary viewer might believe that the “pirates” are stealing patents for manufacturing inventions. Not so. Only films and songs are at stake. Many of these are fifty years old or older, and hence of little commercial value anyway. Some are even older than 75 years, and as such are in the public domain. (Or at least, a good lawyer could so argue.)

More to the point: SOPA is an unconstitutional bill of attainder. It amounts to trial-by-legislature. A court order is no substitute for a trial and conviction. True enough, “temporary restraining orders” have a long legal history. But SOPA does not give a site administrator enough recourse to persuade the court to lift the restriction.

Senator Harry Reid (D-NV), Democratic Floor Leader, still plans to bring PIPA (the Senate version) to a vote on Tuesday, January 24. Opponents of SOPA have until then to line up 41 Senators against it. They have 18 at last report.

The House Committee on the Judiciary will try to hold a hearing on SOPA in February.

Good on you, excellent review.

Finally people are beginning to wake up to the fact that their inalienable rights and freedoms are being eradicated by the powers behind most of your elected that represent the big banks and corporations that rule with their special interest bribery.

Fortunately, those that recognize the Internet as one of our 1st amendment rights and losing it via government censorship is a big step towards tyranny.

We must keep freedom of the internet to continue the ability to exercise free speech and communicate. With the internal censorship of the mainstream media by the same powers that control your politicians, we need a vehicle for truth.