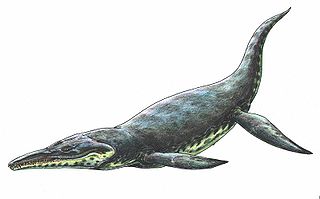 On Creation Day 5, God filled the new oceans with fish, whales, and other swimmers, and filled the skies with flying creatures. This was the first part of another two-day process to put animals on the earth.

The evolution model: from sea to land

The classic model of animal evolution says that animal life began in the sea and then invaded the land. The model further says that birds “evolved” from other animals (reptiles) that already roamed the land.

Whenever anyone tries to explain how scientists know this, they usually point to the fossil record. In that record you typically see marine animals buried deepest, and land animals buried in more “shallow” layers. (Whales are the exception: they are air-breathers. Most paleontologists suggest that the ancestors of whales went back into the sea, for unclear reasons.)

Those who conclude the above, assume that eroded sand and mud buries creatures in the order of their life or death. Hence, creatures in the deeper fossil layers lived and died earlier than creatures more “shallow” to them. For that reason, those who try to reconcile the Bible with conventional models have a serious problem. Whales are swimmers, too, and the Bible says that God made all swimmers earlier than He made the “walkers” and “crawlers” of the land. Yet one finds whales in the shallow parts of the “geological column,” hence the conventional idea that whales “evolved,” and derived, from walkers. “Theistic evolutionists” cannot resolve this.

Aristotle famously said that when one part of your argument contradicts another, you need to check your premises. You will invariably find that one or more of them is/are false. 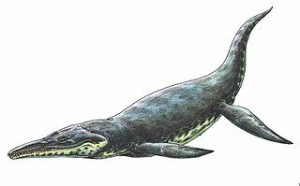 The Bible, and specifically Genesis 1:20-23, says that God formed all swimmers at once, and also formed the flyers. The swimmers include a class of very large swimmers. The Royal Commission under King James I of the UK called them “great whales,” but the whales of today are a subset of these giant swimmers. The New American Standard Bible calls them “sea monsters,” but that description is as inexact as it is incomplete. (A monster, from the Latin verb moneo meaning “I warn,” is a creature that someone must warn you about, or a creature that is itself a warning to you.) The original Hebrew says that these creatures were like giant crocodiles. Job gave further details of a creature that he called Leviathan, and that modern man calls “Predator X” (see video below) or kronosaurus. This is a swimming reptile, and was the largest predator that ever lived.

The word rendered bird in the Hebrew text is a broader term. It means any creature having wings (or literally, covered with wings). That would include flying mammals (bats) and flying reptiles as well as true birds.

As with Creation Day Two, God does not “see that it is good.” God is not finished with the animals. He will finish on the next day, Creation Day Six.

Related Topics:biblecreationevolutionscientific theory
Up Next

Creation Day 4: Age of the Universe

Oh dear. Once again, where to start?

“The model further says that birds “evolved” from other animals (reptiles)”

Uh, no. Birds ARE reptiles; archaeosaurs, to be precise. They are very closely related to otehr archaeosaurs, such as crocodiles, but have almost nothing in common with bats or insects except the ability to fly. Bats, on the other hand, are very close to terrestrial insectivores such as shrews.

“Most paleontologists suggest that the ancestors of whales went back into the sea, for unclear reasons.”

No, they suggest that because they have a very good sequence of transitional whale ancestors. In any case whales are a big problem for ID, because, well, why give some sea creatures lungs when those gill things work fine?

“the whales of today are a subset of these giant swimmers.”

No. Whales are a subset of MAMMALS. They are only distantly related to other large sea creatures, such as large fish and the extinct aquatic reptiles. In fact they’re much more closely related to bears than they are to, say, whale sharks.

“Job gave further details of a creature that he called Leviathan, and that modern man calls “Predator X” (see video below) or kronosaurus.”

How do you know that Leviathan was Kronosaurus? Be honest: that’s completely baseless speculation, isn’t it? In any case Leviathan is described as fire-breathing, which Kronosaurus certainly wasn’t. The only fire-breathing animal of any sort is Draco vulgaris, the swamp dragon. Oh wait, Terry Pratchett made those up…

“Those who conclude the above, assume that eroded sand and mud buries creatures in the order of their life or death.”

Can’t believe I missed that. OF COURSE we assume this, because it’s blindingly obvious. There is no mechanism whatsoever that could magically bury recent corpses under older ones.

Don’t try the “fossils require rapid burial so they must all have been formed in the Flood” argument, by the way. I’m pretty fed up with debunking that piece of drivel, but I can (and will) if I have to.

OK, I guess I can’t argue with that. I better convert then, hadn’t I?

[…] Reprinted from Conservative News and Views This entry was posted in Apologetics by Terry Hurlbut. Bookmark the permalink. […]