Today we celebrate the greatest gift that humankind has ever received: the Resurrection of Jesus Christ. To understand that is to recognize the high stakes of man’s relationship with God.

About 3500 years ago (specifically, 11 April 1591 BC), the first ceremony of Passover took place. The Divine instruction about that event was clear: to kill a year-old unblemished lamb and eat it with bitter herbs and bread baked without yeast. God instructed the Hebrews also to paint their posts and lintels with the lamb’s blood. That night, God sent an avenging angel to roam Egypt and kill the first-born in every house that did not have this bloody mark on its door.

Every part of the Passover ceremony was a symbol of something else. But perhaps not even Moses, their leader and prophet, understood fully what it meant. Two particular symbols are important in this context:

None of the millions of people who took part in that original Passover could have suspected that some day, God would send His Son to sacrifice Himself in that way. But that is exactly what happened, more than fifteen hundred years later. Instead of bitter herbs, Jesus Christ drank grape juice mixed with bile. So when He said,

He didn’t mean the drink. He meant the mission He had come to earth to perform, at the cost of His life. 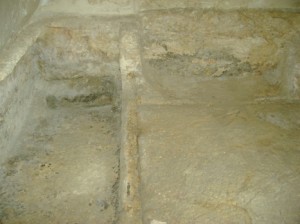 The empty tomb in the garden, outside Jerusalem. Photo: CNAV

Sacrifices do not normally live again. But Jesus did. Three days and three nights after He perished on a wooden cross, came the Resurrection. That event was more than a demonstration of His Divinity. All men will undergo a similar Resurrection near the end of human history. It might be a resurrection to eternal life in God’s presence, or a resurrection into eternal punishment and separation from God. That is the choice that every human must make.

Jesus Christ offers hope. The Resurrection is the evidence of that hope. If the Resurrection did not happen, then all hope is gone; so Paul of Tarsus said again and again. But modern man can know that the Resurrection did happen. Those who saw it, stuck to their story even as Roman soldiers, gladiators, or wild animals killed them, usually in public. Evidence of a more pleasant nature is also available, as illustrated here.

Conservative News and Views wishes all its readers a joyous and pleasant opportunity to remember this greatest gift that God gave to man.

Will the High Court Adopt the Coercion Test?