Breadth of the Tea Party win

Mourdock won 61 percent of the Republican primary vote, to Lugar’s 39 percent. At once he gave credit to the Tea Party for his win. Specifically, the Tea Party fielded “thousands of…volunteers,” who “helped” with his campaign. That, he said, made the difference between winning and losing.

Lugar, for his part, proved a sore loser. An hour after he conceded defeat, he said his in writing:

If Mr. Mourdock [wins in November], I want him to be a good senator. But [to do that, he must] revise his stated goal of bringing more partisanship to Washington. He and I share many positions. But [he] embrace[s]…an unrelenting partisan mindset. [That] is irreconcilable with my philosophy of governance and my experience of what brings results for Hoosiers in the Senate. In effect,… he has promised reflexive votes for a rejectionist orthodoxy and rigid opposition to the actions and proposals of the other party. His answer to the inevitable roadblocks he will [meet] in Congress is merely to campaign for more Republicans [of like mind]. He has pledged his support to groups whose prime mission is to cleanse the Republican party of those who stray from orthodoxy as they see it. 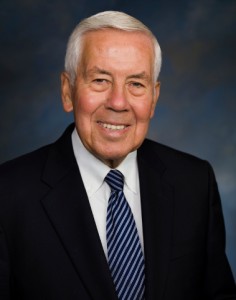 Lugar can only mean the Tea Party. And Tea Party activists everywhere do not apologize for that. And Tim Stanley of The Daily Telegraph (London, UK) says they shouldn’t. Stanley is “spot-on” about what the Tea Party stands for today: reforming the Republican Party, to offer a “real choice” to the people.

Folks are sick and tired of party candidates saying one thing during the primary season, another thing during the general election, and then ignoring both when they get into office. If you pay good money and spend precious time working to [help elect] a candidate, shouldn’t you expect to see them do what they promised…? Yet men like Lugar seemed to regard their local parties as a mix of rubber stamp and perennial nuisance. The feeling, it turns out, is mutual.

Or, as a Tea Party activist in Indiana told Politico.com:

The message to the establishment is: You’re our servants. We’re the masters. Do what you’re supposed to do, adhere to the Constitution or we’ll fire you.

Democrats and other liberals weigh in

a tragedy for the Senate and…particularly [for] all of us who have been privileged to serve with Dick on the Foreign Relations Committee. It’s a blow to the institution during a period when the institution itself has been strained. Whether…as Chairman or Ranking Member of our Committee, wielding the gavel or working the floor, Dick’s approach to governing was always the same:  he wanted to find serious answers to some of foreign policy’s most vexing questions. He’s a class act and a gentleman. And in a Senate that has seen so much change and transition these last years, his expertise on complicated issues honed over 36 years simply can’t be replicated.

How the Tea Party beat Lugar

The Associated Press told the truth about how the Tea Party could beat Lugar. Lugar has been in the Senate too long: 36 years. In fact, he doesn’t even keep a house or apartment in Indiana, though the Constitution says he must. Worse, Lugar is a Republican In Name Only, not a conservative.

I think it was a message to Republicans everywhere not to stray too far from party orthodoxy.

“Party orthodoxy” is incorrect. The Republican Party never had an orthodoxy. That was the Tea Party’s complaint about it. The Democrats do have an orthodoxy, and its names are socialism and communism. Tea Party people see it this way: Appeasers do not win elections, or legislative battles. Genuine articles do.

If by “alive and well” you mean “helping to destroy the party created by men like Lincoln, Seward, Bates and Chase” then Yes, the tea party is alive and well. For instance, in defeating Lugar you’ve turned a certain GOP hold into a tossup, so thanks for that.

Here’s a great quote from former Sen John Danforth (R-MO): “You’re gonna be left with a party that is very pure and increasingly inconsequential. And a political system that is increasingly unable to get off the dime.”

I’m currently reading Team of Rivals, a biography largely about Lincoln but including large slices of the other three I named. All the founders of the Republican Party would disown you. They would despise your beliefs and work tirelessly to see you defeated. You must be proud to be on the other side of history from Abraham Lincoln.

Let Senator Danforth cry me a river. His type are in the cross-hairs.

“Cross-hairs”??? Now you’re advocating lethal measures against those who disagree with you?

You aren’t a Republican, Terry. The Republican Party was born out of man’s concern for his fellow man. The founders believed in a strong central government – just look at the projects sponsored by Republicans in the 19th century. And the 20th.

No. What you’re doing is perverting a party with a long and noble history. You could at least have the common decency to form a new party instead of ruining an existing one.

There you go again. “Cross-hairs” are a metaphor for the scope of one’s focus. We’re not talking about a rifle sight.

“A long and noble history”? I don’t know whether to laugh at such historical revisionism or simply cry. Because you have never had a kind word for the Republican Party before this.

[…] year, the Tea Party draws inspiration from an event out-of-State: the defeat of long-time Senator Richard Lugar (R-IN) in the primary. And even if they cannot duplicate that […]