Two days ago the European Organization for Nuclear Research (CERN) announced some data they actually gathered in December of last year. They found a new subatomic particle, and they think they might at last have the Higgs boson. The news has excited most laypeople and many scientists. But no one seems able to say what the Higgs boson is, or what finding it really means.

Higgs boson according to CERN

The staff of CERN announced their find at CERN’s offices in Geneva, Switzerland. They did not say that they had the Higgs boson, but only that they had something like it. Whatever they have is more than a blip on  a tracing:

We observe in our data clear signs of a new particle, at the level of 5 sigma, in the mass region around 126 GeV.

“Five sigma,” in statistics, is almost an ironclad guarantee. Scientists describe subatomic particles, not by their weight, but by their energy; hence “126 GeV.” That makes it 126 times as heavy as a proton, and the heaviest subatomic particle anyone has found so far.

The data come from two sets of experiments on the Large Hadron Collider, the largest atom-smasher in the world. The names of those experiments are ATLAS and CMS (Compact Muon Solenoid). 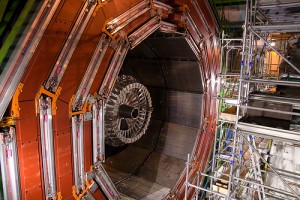 Why does the Higgs boson matter? Theoretical physicists try to explain all of physics in terms of certain fundamental particles of matter. They have a theory, the Standard Model of Particle Physics, to explain how all the particles they have seen, work together and combine. Protons, neutrons, and electrons can explain chemistry and electricity. But much smaller particles make up each of these three. Bosons are a special case. They each carry one of the elementary forces of physics. Specifically, W and Z bosons carry the “weak force.” Photons carry electromagnetism. “Gluons” carry the “strong force.” (The Standard Model has no boson to carry gravity. A particle like that would have no mass, and would travel at the speed of light.)

The problem: one type of particle is missing. That particle is the Higgs boson. The W and Z bosons cannot exist without it. For that matter, neither can anything else. The Higgs boson, according to this theory, is the source of mass.

The newspapers, magazines, and TV channels have played up the Higgs boson for all it’s worth. More stunningly, several scientists, in and out of CERN, seem almost giddy with their excitement. The National Post (Canada) quotes two scientists at CERN talking about understanding “dark matter” and even traveling at the speed of light. (If one could somehow “switch off” the Higgs, then an object would weigh nothing and could easily reach the speed of light and stay there.)

Just one catch: the Standard Model says nothing about dark matter, or about canceling out the mass of the Higgs boson, or what that would do to the larger object.

The Wall Street Journal broke from its usual level-headed policy. It carried this piece that called the Higgs boson “the spark that caused the Big Bang.”

The Los Angeles Times talked about US scientists being jealous of CERN. Why? Because CERN has the LHC, and Congress refused to build the Texas Superconducting Super-Collider.

The Daily Telegraph (London) interviewed Peter Higgs, who said forty years ago that such a particle must exist. Now that CERN has found it (maybe), even he admits: he has no idea what it’s for, or how to use it. At least he’s honest.

In fact, nothing in particle physics says, or implies, that without the Higgs boson, the Big Bang could not happen. Then again, nothing says that it could happen. This is another heavy particle, nothing more. And no matter what anyone says, the Higgs boson cannot prove anything about how the universe came about. No one can prove anything in science. One can only disprove something. CERN has shown one thing only: the Standard Model still holds. So far.

Thomas Fleming, in The Daily Mail (London), finally gave the proper perspective. He scathingly accused the “press lords who tell us what to think” of having a hidden goal. That goal: to make God unnecessary. (He has a point. Lawrence Krauss, at the University of Arizona, now calls the Higgs boson the “Godless particle.”) Nor does this stop with the quest for the Higgs boson:

The US government is actually spending billions upon billions of dollars looking for extraterrestrial life forms, and why?  Because they think that the discovery of a virus on Mars will prove that man is not special and there is no God.  There must be a cheaper way, some deity-destroying pill we could all take.  I feel sure there is government money for such a program.

My biologist friends use to tell me that there is no mystery about how life originated on earth.  After all, given infinite time and an infinite variety of circumstances,anything can happen.  This is an insincere argument, since it is precisely the scientists who have limited both the time and the circumstances in which life might have originated.  Nobel laureate Francis Crick was honest enough to see the thing was impossible, which is why he  put forward the hypothesis that life is alien on earth, having arrived by way of spores from outer space.  This conveniently gets us back to infinite time and circumstances, but it is really a confession of failure.

Right again, though Fleming oversimplified the case. Francis Crick did give up on abiogenesis (life from non-life). He knew that DNA had far too much information for that. So he and Leslie H. Orgel came up with directed panspermia. According to them, aliens, either in this Galaxy or in another, fired a brace of missiles, each laden with bacteria and blue-green algae, in all directions from their dying home world. One crashed on Earth, and we are the by-product. That concept found its way into two popular science-fiction franchises on television:

Fleming ends by quoting William Blake, who threw back in their faces the mockery of François Arouet de Voltaire and Jean Jacques Rousseau, and of even earlier philosophers:

The Atoms of Democritus
And Newton’s Particles of Light
Are sands upon the Red Sea shore,
Where Israel’s tents do shine so bright

To which, no doubt, Blake would add the Higgs boson.