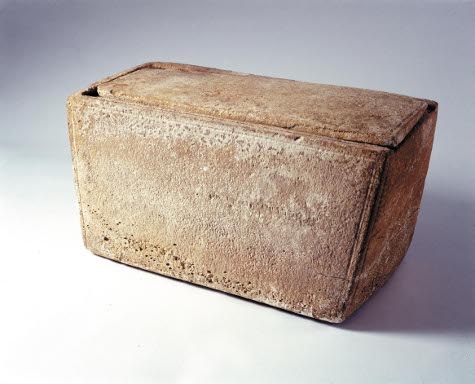 Ten years ago, the Biblical Archaeology Society announced the oldest known object relating to the life of Jesus Christ. A 2,000 year old ossuary, or “bone box,” turned up in an antiquities shop on the Via Dolorosa in Jerusalem. This “James Ossuary” carried these words, in ancient Aramaic, on its side:

The find led to a criminal investigation, charges of forgery, and a sensational trial in Israel. Last spring the verdict came down: “Not guilty.” 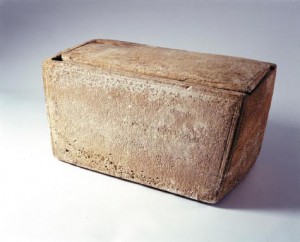 The James ossuary was on display at the Royal Ontario Museum from November 15, 2002 to January 5, 2003. Copyright 2005 by User Paradiso/Wikipedia (English).

The James Ossuary is about the right size for a box holding human bones. This was the custom for burial, two thousand years ago. The box is empty; someone long since took the bones out and buried them somewhere else. According to the antiquities dealer who had it, someone was using it to plant flowers in when he found it.

André Lemaire, a paleographer at the Sorbonne, translated the writing on the side. He gave his expert opinion that the writing was authentic. Ada Yardeni of Hebrew University also believes that the writing is as old as the box. Both said the box dates from 6 AD to 70 AD. (The second date is the date of the Sack of Jerusalem and the destruction of Herod’s Temple by Titus, future Emperor of Rome.)

Hershel Shanks, of Biblical Archaeology Review, published his own history of the James Ossuary. He announced it to the world on October 21, 2002. The problem: no one told the Israel Antiquities Authority.

Nevertheless, Shanks asked for and got the IAA’s permission to exhibit the object abroad. On November 15, 2002, the James Ossuary went on display at the Royal Ontario Museum. Perhaps a low-level functionary gave permission at first. But as January 5, 2003, the deadline to send the box back to Israel, approached, the higher-ups at the IAA heard about it. When Shanks asked their permission to extend the time, the IAA angrily refused.

Then on June 18, 2003, the IAA accused the antiquities dealer, Oded Golan, of forgery. Specifically they said that Golan added the writing himself, and dressed it in chalk to make it look as old as the box.

Thus began a nine-year ordeal for Golan and frustration for Shanks and other defenders of the box. In 2007, the IAA brought Golan to trial for forging the writing on the James Ossuary, and other writings like it on several other objects from the period. On March 14, 2012, a judge found that the IAA had failed to prove, beyond a reasonable doubt, that Golan had forged anything. The only thing that Golan was guilty of, was trading in antique objects without a permit. The court sentenced him to about a month in jail. He has already spent more time than that in jail, so he probably will not serve another day. (See also this article in Wikipedia, hardly a friend to Christianity or Judaism.)

Is the James Ossuary the real thing?

The verdict does not say that the James Ossuary really held the bones of the brother of Jesus. It does say that a government tried and failed to prove that someone forged an ancient writing.

Shanks quotes Camil Fuchs at Tel Aviv University for the odds on the James Ossuary coming from a family other than that of Jesus of Nazareth. The box names three men:

Fuchs suggests that at least one man named Yaacov,, maybe two, and three men at the outside, had the relatives that the James Ossuary names, in the dates that Lemaire and others have given.

Higgs Boson: So What?

I’ve never been impressed with discoveries relative to the historical times of Jesus and several thousands of years before his birth, life, death and resurrection. I always remember the Gospel of Luke Scripture of the conversation of the tormented Rich Man in hell with Father Abraham in heaven.

The Rich Man in his painfully stressed state pleads with Father Abraham to send some emissary to his family on earth to warn them of this place of eternal damnation and forever suffering. Father Abraham’s reply is, as follows:

Even in our “modern” day today, that principle holds true. If needy and priceless souls cannot accept the Holy Scriptures which the historical Christ accepted, how will they ever be persuaded to repent and believe if one of their family members comes back from the dead? The Triune God looks for faith. That, is what pleases him. [Hebrews 11:6]

I read through the links provided in the article, but the only objective conclusion I could find in any of them was that the ossuary was not proven beyond a reasonable doubt to a fake.

And yet the title of this piece declares “James Ossuary Proved Authentic”, so there must be evidence to support that, and not just opinion.

On the likely chance that I missed something, can you point out that specific objective evidence from the sources that proves the item is what it is claimed to be?

Here is the point: no artifact of this kind has ever before been the subject of a criminal trial on allegations of deliberate fraud. An agency of the government, having a variety of motives to cast doubt on this artifact, gave it their best shot, and tried to ruin an innocent man’s life into the bargain. They failed. This is one of the rare instances in which I find that an agency of the Republic of Israel acted less than honorably. Thank God the courts had more honor. I wonder what kind of trial Oded Golan would have gotten in an American court, considering the attitudes of certain courts in certain recent politically charged cases in this country.

The artifact wasn’t on trial – the man suspected of fraud was.

Having him declared not guilty of fraud says nothing about whether the artifact in question is or is not what it is claimed to be.

But it does provide a weighty suggestion that the inscription was as old as the box. (No one disputed how old the box was; it was too delicate to be any newer than about 2,000 years old.) After that, a statistician calculated that as few as one man in Jerusalem at the time would have had the family relationships that the inscription describes.

One thing creationists love saying to evolutionists is that they have “just-so” stories to back you their theory.

Well if this isn’t a religious “just-so” story then I don’t know what is.

The ONLY thing the story states is that forgery can’t be proven “beyond reasonable doubt.” That’s all.

Everything else is wishful thinking, much like your claims that half of Genesis is Adam telling the story. I’m still waiting for your proof of that.

For somebody who claims to be reclaiming the fourth estate, your reporting techniques are shoddy to say the least.

So what you’re saying, I suppose, is that you still believe that Oded Golan is guilty.

“So what you’re saying, I suppose, is that you still believe that Oded Golan is guilty.”

No. What I’m saying is that Golan being acquitted does not constitute objective proof that the item is what it is claimed to be. That’s simple and clear reasoning.

Here are some questions that would need to be answered towards that end:

1) How is the age of the box proven beyond any doubt that it’s actually from that era instead of being made to appear that way?

2) What records are the statistician using to determine the familial relationship uniqueness? Are there complete, intact archives showing the names and lineages of all people alive in that region at the time, or is it just speculation that arrives at the conclusion the believers want to hear?

I’m not trying to be a killjoy, Terry, but when a self-professed journalist reports that “James Ossuary Proved Authentic”, the story that follows should reflect that assertion and back it up.

Why don’t you follow some of the links I gave, and find out?

I agree with DinsdaleP – all this case really says is that Golan is not guilty of producing fake antiquities. That doesn’t prove conclusively that the box is anything to do with a relative of Jesus of Nazareth, or that the inscription is genuine. There are plenty of “ancient fakes” kicking around. Just look at the number of number of “original” mounds of creation that existed in Pharaonic Egypt, where practically every town also had a “tomb of Osiris” (far more than the number of pieces his body was meant to have been cut into).

Christianity is likewise replete with ancient fake bits of saints and “unique” holy objects, and all religions do something similar.