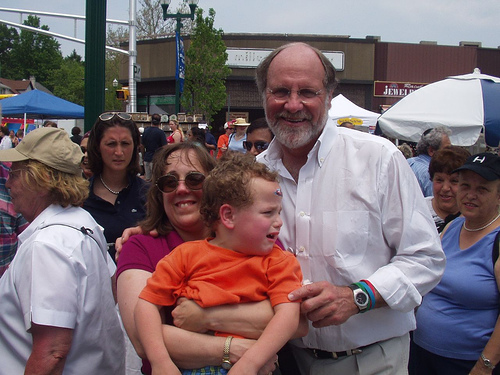 Yesterday (July 26), word came out that explains, in part, why the US Department of Justice never prosecuted Jon S. Corzine or anyone else at MF Global Holdings. The Attorney General, and two of his most senior associates, all had legal ties to MF Global, through the law firms that employed them. That alone should force them to yield to a special prosecutor. But it is part of a much larger problem. MF Global is not the only bad actor on Wall Street. 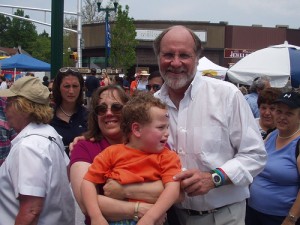 Jon Corzine at the Teaneck Street Fair in 2006, while he was Governor of New Jersey. Photo: Leslie Gottlieb, CC BY 2.0 Generic License.

Before any law firm takes a new case, someone in that firm looks up all the other cases that the partners and associates are working on. Law firms do not let their associates represent opposite sides of a case. Every bar association in the land forbids that.

Someone should have run such a “conflict study” on MF Global for the DOJ. Peter Schweizer (The Washington Times), author of Throw Them All Out, did just that. Here is what he found:

Jon S. Corzine, the last head of MF Global, was a “bundler” for putative President Barack H. Obama. That was enough to prompt sixty-five Members of the House to demand a special prosecutor in the case. Schweizer’s findings should force Holder to appoint a special prosecutor, by every rule that every lawyer knows about conflicts of interest.

As Breitbart.com reported yesterday, MF Global now has political enemies on the right and the left. Newsweek asked in May why the DOJ never prosecuted MF Global, or anyone else on Wall Street. The DOJ today prosecutes many things, but they prosecute financial fraud far less often than happened under the Bush administration. Richard Eskow at The Huffington Post noticed the same thing two weeks ago. He asked in effect, What is Eric Holder doing, or waiting for?

Ann Barnhardt said to her readers, in effect,

I told you so.

She gave an interview on November 30, 2011. (See the video embed.) For half an hour she said that no one would ever touch Jon S. Corzine. She might not have had the specific findings that Schweizer reported yesterday, but she didn’t need them. For her, Jon S. Corzine’s role in raising money for Obama was enough.

But she also said from the start that not only MF Global but the entire Wall Street system is hopelessly corrupt. (See also here and here.) In that November interview, she even said that civil war might break out over not only the failure but the brazen and absolute refusal to prosecute the fraud with which, she says, Wall Street is rife.

Gold and silver ready to rise?

Why should this surprise anyone?

Any thinking individual should be able to discern that this entire US meltdown was planned from the beginning (1913 start of Federal Reserve).

With most of your representatives, mainstream media and education owned by the banksters and their big corporate minions the average citizen is rapidly being robbed of his wealth and freedoms.

Hardly any of the paralytic thieves that instigate any of this are ever prosecuted, except an occasional scapegoat.