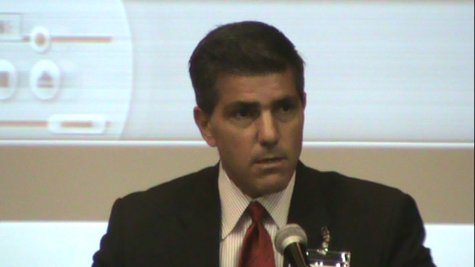 To guard your First Amendment rights, you must stand up for them. Demetrios K. Stratis stands up in court for those willing to stand up in society.

Demetrios Stratis is a First Amendment lawyer. He practices solo in Fair Lawn, New Jersey. Alliance Defending Freedom brings cases to him, among many lawyers nationwide, from ordinary people who must defend their First Amendment rights. Stratis described his case work briefly at the first annual God and Country Conference of the New Jersey Tea Party Caucus, on Saturday, September 29:

His most celebrated case involved twelve nurses at the University of Medicine and Dentistry of New Jersey. As a matter of conscience, they did not want to work on abortion cases. The hospital told them: do this work, or we will fire you. The nurses refused. The hospital fired them. They sued. Demetrios Stratis represented them. And they won. 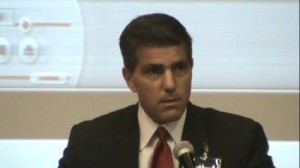 Sometimes, a judge or jury might decide a case too late to help the plaintiff. But that kind of case can still set a precedent. Stratis described a high school student who wanted to sing the song Our God is an Awesome God at a school talent show. The school board refused. She sued. The case came up for trial on the day of the talent show. The trial judge asked the school attorney, in effect, what was his problem? But the judge then said that he had “too many complex Constitutional issues” to decide the case then and there. So Stratis had to tell his client that she couldn’t sing the hymn. That was fine with the student, so long as the judge would “let the case go forward.”

Eventually the court ruled in her favor. Within days of that ruling, a school board member from another district called Stratis to ask about the same kind of controversy. This time, a student wanted to read from the Bible in the talent show. Stratis suggested that he look up the case he had just one. The board member did, and then assured Stratis that he would let the student read his Bible verses in the show.

This, said Stratis, showed why precedent is so valuable in case law. Once a court decides a case one way, courts will decide any other case like it the same way. They will cite the first case as a precedent.

Stratis cites all those cases to show how important it is to stand up for one’s First Amendment rights. But he also mentioned, if briefly, a nationwide protest that ADF sponsors every year: the Pulpit Initiative. This is ADF’s fifth year to run this program. More than 1000 pastors will preach specific messages on the clash between government policy and the Bible. This will conflict directly with a law on political activities of tax-exempt charities: the Johnson Amendment. In 1954, then-Senator Lyndon Baines Johnson (D-TX) changed the law on tax-exempt charities (Section 501(c)(3) of the Internal Revenue Code) that take tax-deductible gifts. Such charities may not directly speak or act for or against any “candidate for public office.” 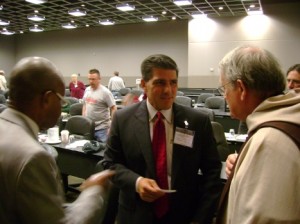 This, say Stratis and the ADF, breaks the First Amendment. Stratis did not mention that the IRS enforces the Johnson Amendment selectively, against conservative churches only. (Witness The Rev. Jeremiah Wright’s career at Trinity Episcopal Church, Chicago, IL.) That does not matter to him or ADF. What matters is that Congress has made a law prohibiting the free exercise of religion, and abridging the freedom of speech. The First Amendment does not let Congress do this. (The Speak Up Movement, the allied group actually running the Pulpit Initiative, offers this analysis of the Johnson Amendment and why Senator Johnson proposed it.)

Pastor Alan B. Brown of Parsippany Baptist Church, Parsippany, NJ, told CNAV yesterday that he will take part. He would not say whether he registered with ADF or the Speak Up Movement. He even said that publishing his Messages is nothing new. (They are available as digital sound on the Church website.) But he did acknowledge that he changed the date of a key Morning Message to coincide with the protest.

On the appointed day (October 7), Pastor Brown will preach on “Biblical policy and Party platforms.” This is really part of a series of Morning Messages he already has running on the Biblical role of government. He has already said, many times, that he will preach from the Bible, government or no. He cited Acts chapter 4 as his Biblical authority to do this.

This is what Demetrios Stratis means by standing up for the First Amendment. Pastor Brown’s example is instructive: it shows that one person willing to stand up will inspire others to do the same.

Pro-Life – does it matter?