In my last article, “The Devil’s Three Greatest Lies,” I said Lie #3 was the devil’s lie that Christians shouldn’t be involved in politics. The usual firestorm by those who hate the mere mention of God in the same sentence as “politics” or “government” ensued. Rather than respond to each and every comment to defend my point of view, I thought I would rather let the Founders of America speak for themselves on the subject.

What sort of America did the Founders want?

Before I do, it needs to be stated that the perverted argument (yes, I deliberately used the word “perverted” because the argument twists words) that this is not a Christian nation because our Constitution does not include references to Biblical precepts, is irrational. One last time – in the interest of being as clear as possible – I will say it again, this is not a theocracy. It is a Constitutional Republic – but: our system of government was based on Christian “principles.” Our Founders, regardless of what denomination they practiced, recognized the value of the Christian faith to create a moral and virtuous society that was capable of self-government. But don’t take my word for it; our Founders can speak for themselves.

In the Declaration of Independence 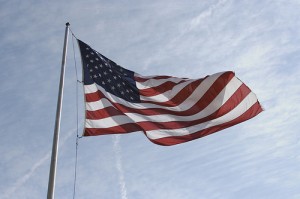 When in the course of human events, it becomes necessary for one people to dissolve the political bands which have connected them with another, and to assume among the powers of the earth, the separate and equal station to which the Laws of Nature and Nature’s God entitle them, a decent respect to the opinions of mankind requires that they should declare the causes which impel them to separation.

…that all men are created equal, that they are endowed by their Creator with certain unalienable rights, that among these are life, liberty and the pursuit of happiness.

And beyond the Declaration

God who gave us life gave us liberty. And can the liberties of a nation be thought secure when we have removed their only firm basis, a conviction in the minds of the people that these liberties are of the Gift of God?

I am a real Christian – that is to say, a disciple of the doctrines of Jesus Christ.

Other Founders speak for America under God

Resistance to tyranny becomes the Christian and social duty of each individual…Continue steadfast and, with a proper sense of your dependence on God, nobly defend those rights which heaven gave, and no man ought to take from us.

John Adams in An Oration Delivered Before the Inhabitants of the Town of Newburyport at Their Request on the Sixty-First Anniversary of the Declaration of Independence, July 4, 1837.

The only means of establishing and perpetuating our republican forms of government is the universal education of our youth in the principles of Christianity by means of the Bible.

Benjamin Rush, one of the signers of the Dec. of Ind.; Surgeon General of the Continental Army, Ratifier of the U.S. Constitution; Father of American Medicine, Treasurer of the U.S. Mint, Father of Public Schools under the Constitution, he also founded the first Bible society

Our Constitution was designed for a moral and religious people…it is wholly inadequate to govern any other.

Noah Webster (of dictionary fame) speaks for America under God

The religion which has introduced civil liberty is the religion of Christ and His apostles…This is genuine Christianity and to this we owe our free constitutions of government.

Our citizens should early understand that the genuine source of correct republican principles is the Bible, particularly the New Testament, or the Christian religion.

The Christian religion…is the basis, or rather the source, of all genuine freedom in government…I am persuaded that no civil government or a republican form can exist and be durable in which the principles of Christianity have not a controlling influence.

War on Women, Scripture and Science

The highest, the transcendent glory of the American Revolution was this — it connected, in one indissoluble bond, the principles of civil government with the precepts of Christianity John Quincy Adams
The Bible contains the revelation of the will of God. It contains the history of the creation of the world, and of mankind.”
John Quincy Adams
So great is my veneration for the Bible that the earlier my children begin to read it the more confident will be my hope that they will prove useful citizens of their country and respectable members of society. I have for many years made it a practice to read through the Bible once every year.”

It is impossible to rightly govern a nation without God and the Bible.
George Washington

Let us with caution indulge the supposition that morality can be maintained without religion. Reason and experience both forbid us to expect that national morality can prevail in exclusion of religious principle.
George Washington

Sir, my concern is not whether God is on our side; my greatest concern is to be on God’s side, for God is always right.
Abraham Lincoln

We hold these truths to be self-evident: that all men are created equal; that they are endowed by their Creator with certain unalienable rights; that among these are life, liberty, and the pursuit of happiness.
Thomas Jefferson

If we ever forget that we are One Nation Under God, then we will be a nation gone under.
Ronald Reagan

Freedom prospers when religion is vibrant and the rule of law under God is acknowledged.
Ronald Reagan

Government’s first duty is to protect the people, not run their lives.
Ronald Reagan

The problem is not that people are taxed too little, the problem is that government spends too much.
Ronald Reagan

Within the covers of the Bible are the answers for all the problems men face.
Ronald Reagan

Without God, democracy will not and cannot long endure.
Ronald Reagan