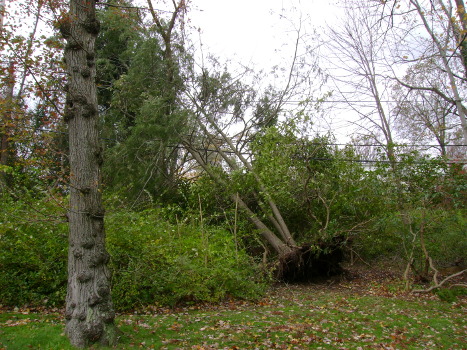 It is no secret that Mitt Romney’s campaign was on a roll when the disaster storm hit the east coast of the United States. The devastation and misery continues as more and more of the heartbreak resulting from loss of life and property is realized.

Impact of Sandy will fade. Impact of Obama might not. 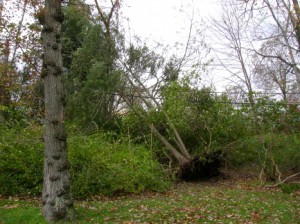 An uprooted tree leans against another tree and tangles with an electric line after Hurricane Sandy passes through. Photo: CNAV

New Jersey is a strong and wonderful State. It has been my home for 63 years of my 65-year life. We will recover and we will not only survive this, but we will thrive. Unlike many others who have suffered catastrophes, a year from now, except for a few vacant lots, there will be no sign of that devil storm’s path.

My fear is we will not be able to say the same about the path Obama will forge, as he continues to wrest freedom from our fingertips, impose regulations and executive orders, implement massive taxes and government control, while he strikes blow after blow against a colonialist, a racist, a capitalist America.

Why did Governor Christie do Obama this favor?

Governor Christie may have decided to put politics aside during the aftermath of this storm in an effort to get quick and needed help from Washington.
Or he may have made those moves thinking it would make him appear to be bigger than politics but in effect immersing deeply into them.

Only he knows what his motives were.

But what is known, without any shadow of doubt, the glowing admiration by Christie for Obama was used by the propaganda wing of the Democratic Party, better known as the media, and demolished Romney’s campaign just as effectively as Sandy washed away property and lives here in New Jersey.

TPATH does believe voter fraud was the real winner in this election. We saw over 97 voting districts cast 100% of their votes for Obama. That’s right, 97 polling places and not one single vote for Mitt Romney. Those numbers would make Fidel Castro laugh.

The answer to these questions is a resounding no. The court system, the news media, judges and prosecutors, justices and politicians have shown they are spineless cowards who fret more about themselves then the rule of law and our beloved Constitution.

Impact of the media

And speaking of the media. What a gift the the governor of NJ gave them and Obama. What a gift indeed. TPATH has researched and compiled counts on how many times the national news media either printed his statements, played the audio of them or showed the videos.

That the Obama campaign received a windfall is the understatement of the century. Those undecided voters, those independents and those unaffiliated and last minute deciders, were pushed into the Obama column. And he did not have to spend a dime of his illegally gotten campaign dollars to do it.

So what kind of numbers are we talking about? It is important to know two things about these statistics. First, they do not include local TV, local cable and local radio stations. Only accounts from what is considered to be national or national type institutions such as the New York Times, Washington Post, etc., were used.

The second is, we actually did not complete the full count. Once we got to the numbers we did, it was apparent that further research would be beating a dead horse or should a we say, a dead campaign?

These totals amount to the number of times, from the day Christie first made his remarks, right up to and including November 6th, they appeared in the main stream media.

Did Governor Christie help Obama secure another term? You and he will have to decide. TPATH has.

Related Topics:candidateeconomyelectionpoliticianspresidentTea Party
Up Next

Ok firstly “Mitt Romney was winning” – wrong. You believe he was winning, because you believed the polls that had been “amended” to take care of alleged liberal bias. Still, you weren’t alone in this, Mitt didn’t even write a concession speech, that’s how well his team duped him.

“a colonialist, a racist, a capitalist America” – yes, because how dare Obama work against a racist America!

“Why did Governor Christie do Obama this favor?” – because Christie loves New Jersey more than he hates Obama. But then I don’t expect you to understand that.

I don’t accept the premise that Obama did, or will do, New Jersey, or America, any favors. Nor that America is “colonialist” or “racist,” or that capitalism is evil.

I don’t blame Gov. Christie entirely. There were other factors involved. I believe that the election apparatus was highly flawed. The Republican Party made the mistake of not guarding the voting process hen house. Hence the Dem foxes carried the day. Here, are more of my own authored blog thoughts:

“We saw over 97 voting districts cast 100% of their votes for Obama. That’s right, 97 polling places and not one single vote for Mitt Romney.”

Well, that’s good news for you. All you have to do is find ONE voter from one of those districts who’ll swear under oath that he voted for Romney and you’ve blown the lid right off the fraud. I’d get to work on finding one if I were you. The Romney-supporting majority of your fellow Americans need your help with this.