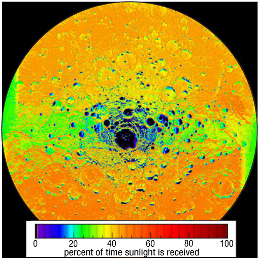 Today NASA showed the world proof of something they long suspected: ice on Mercury, and lots of it. But the Mercury ice find reminds us of an old and vexing riddle: how did the ice get there?

Reports on the Mercury ice find came from the Associated Press and in The Chicago Tribune, Yahoo! News, and TechRadar. All say the same thing: NASA’s MESSENGER rocket probe used reflected laser light and gamma rays to look closely at the surface of Mercury. They concentrated on the poles, because if ice did lie on Mercury, it could lie nowhere else on Mercury. (The poles are always in shadow, hence are almost as cold as space itself. Mercury has no atmosphere. So everything is either hellishly hot or bone-chilling cold, depending only on whether it is in sunlight or shadow.) No one can deny what those laser and gamma studies show: Mercury has ice on it, enough to bury all of Washington, DC.

The buried layer must be nearly pure water ice. The upper layer contains less than 25 wt.% water-equivalent hydrogen. The total mass of water at Mercury’s poles is inferred to be 2 × 1016 to 1018 g and is consistent with delivery by comets or volatile-rich asteroids.

That’s anywhere from twenty quadrillion to two quintillion grams, Enough, says project scientist David Lawrence, writing in Science, to bury Washington, DC in ice to a depth of two and a half miles.

But how did the Mercury ice get to Mercury? That any ice should still sit on Mercury amazes most people. (After all, the ground on Mercury gets as hot as molten lead in the daytime!) But scientists have known at least since 1991 that Mercury’s poles are so bright on radar that something reflective, like ice, must sit on them. Now NASA knows: the Mercury ice is real. But they still don’t know how it got to Mercury.

Map of Mercury’s south pole, showing how often each part of the surface is in the sun. The dark purple regions are always in shadow. That’s where the MESSENGER probe found the Mercury ice. Graphic: NASA, reprinted in In the Beginning: Compelling Evidence for Creation and the Flood by Walter T. Brown. Used by permission.

The MESSENGER project scientists have an answer: comets, asteroids, or both, carried the ice to Mercury. Every scientist knows that comets are dirty snowballs. Many asteroids have at least as much ice as rock.

That answer is certainly the best. But it is incomplete. Not too many comets fall to Mercury today. Nor do many asteroids get inside the orbit of Earth. (Though at least one asteroid, Cruithne, orbits the sun in tandem with Earth and often passes very close.)

The MESSENGER team has an even more interesting, and almost vexing, finding. The Mercury ice likely holds organic matter. Dark patches in the ice could only be organic. But no scientist ever thought Mercury was hospitable to life. In fact, Mercury is the last place (other than the sun) where anyone would expect to find anything living, or anything that once lived.

So what evidence must we explain? Here it is:

So: several comets, and maybe some water-rich asteroids too, fell onto Mercury’s north and south poles. And those comets and asteroids held organic matter. This begs another question: where did objects like these come from?

For that we have two competing explanations:

Panspermia (from the Greek pas, pasa, pan all, every, etc., and sperma a seed) means “seeding everywhere.” According to the panspermia theory, comets and asteroids, or at least a significant portion of them, hold the stuff of life along with their water. Some of these fell to earth, and we are the by-product. Maybe some of the rest fell to Mercury (and the Moon, and Mars).

But this begs the question of where the stuff of life came from, and how it could cross space, subject to cold and radiation, and still “seed” the Earth. Indeed, most evolutionists don’t believe this. They believe in abiogenesis, the notion that life arose from non-life. But abiogenesis could not possibly explain the organic layer on the Mercury ice. (The primordial soup would be far too cold.)

The Hydroplate Theory is Walt Brown’s theory of the Global Flood. According to it, half of today’s ocean water lay deep underground—very deep. Ten miles deep. About 4400 years ago, the ten-mile-thick crust cracked open and let all that water out. It came out with enough force to throw vast amounts of water, rock and mud – one percent of the total weight of the Earth – into space. That water, rock and mud persist as comets, asteroids, and meteoroids.

Brown explains how comets formed in the micro-gravity of space. (Even a hand-sized rock, far enough away from any planet or moon, can become an orbital primary and make other, lighter-weight objects fall into it.) He also shows that such comets would fly off from earth in all directions. That’s why comets today have orbits going off in all directions. And Brown defies anyone to explain the Mercury ice (or the lunar or Martian ice, either) by any other theory of where comets came from. (Brown also knew about the Mercury ice twenty years ago, when NASA first suggested it.)

And the organic matter? Anything from germs to shrubs, that the escaping water, rock and mud carried with it. In fact, Lawrence, in the Science paper, says the ice melted when it crashed, then re-froze, with the dark organic layer on top. According to the First Law of Thermodynamics, it could do nothing else.

Mercury ice must have come from earth

Science and the Bible – Part 3

“But the Mercury ice find reminds us of an old and vexing riddle: how did the ice get there?”

“That water, rock and mud persist as comets, asteroids, and meteoroids.”

Is Brown now arguing that the comets, asteroids and meteoroids add up to 1% of Earth’s mass? Would he like to debate that?

He has always maintained that. Therefore he would like to debate that, with anyone having the courage.

“Brown defies anyone to explain the Mercury ice (or the lunar or Martian ice, either) by any other theory of where comets came from.”

Happy to. It won’t take long either.

Read his book, first. He shows that ice on the Moon and Mercury is a deal-killer for every theory but his own.

“He shows that ice on the Moon and Mercury is a deal-killer for every theory but his own.”

Yes Terry, but he’s WRONG! The universe is full of ice. Water is the second most common molecule after molecular hydrogen. There’s ice everywhere.

“Even a hand-sized rock, far enough away from any planet or moon, can become an orbital primary and make other, lighter-weight objects fall into it.”

How far away does Brown say they would have to be? I’m genuinely curious.

Read the book, and find out. Check out “The Origin of Comets.”

And that discourse follows logically from Sir Isaac Newton’s Law of Gravitational Attraction.

“Dark patches in the ice could only be organic. But no scientist ever thought Mercury was hospitable to life.”

Organic =/= Life. Organic = carbon-based. Carbon is the fourth most abundant element in the universe. Finding organic chemicals on Mercury is no surprise at all. They’ve been detected in interstellar dust clouds.

Then why does every conventional astronomer equate organic matter with life? Only the “abiotic petroleum” theorists suggest that you get carbon-based compounds, in large amounts, from non-life. They might have something, or they might not. In any event, “astrobiologists” are genuinely curious about that organic-matter layer on the Mercury ice.

Organic matter is required for life, but life is not required for organic matter. This makes organics exciting in that finding them does not suppose life, but the alternative of not finding them would have eliminated that possibility. So finding organics notable first step towards finding life (as we know it), hence the association and excitement.

Where does organic matter come from, if not from life? (In the wild, that is, and not in any laboratory or industrial process.)

“Then why does every conventional astronomer equate organic matter with life?”

Simple: They don’t. They equate organic matter with carbon compounds.

MatthewJ
Reply to  Terry A. Hurlbut

“Then why does every conventional astronomer equate organic matter with life?”

They don’t. You are wrong about that. What they are sometimes interested in is determining how you would use measurements of certain organic compounds (say, isotopic ratios in methane or overall methane/hydrogen ratios) to infer the existence of ongoing or historical mechanisms best characterized as biological rather than merely physical. As an example, the ratio of molecular oxygen to carbon dioxide on Earth suggests an ongoing energy-dependent process to maintain the ratio. We happen to be familiar with the process in question: photosynthesis. Looking for particular combinations of compounds that are the result of biological life _as we know it, or might suspect it to be,_ is not the same as attributing all organics to life.

Let’s restrict ourselves to distant off-Earth processes so we avoid any possibility of biological activity. As a pathologist you should be familiar with formaldehyde, an organic compound which was first identified in the interstellar and parastellar medium in 1969, and has since been investigated extensively. There are a number of proposed mechanisms for its formation, usually involving the reaction of carbon monoxide ice with hydrogen at the surfaces of dust grains.

There have been over 120 different molecules identified in regions of space too far distant from Earth to possibly be the result of contamination from putative Earth flood material. Please note that this is purely remote sensing – many complex molecules that can be detected in samples from meteorites, spectra of comet emissions, etc., are not detectable by the same means used to probe interstellar clouds. I omit comet and meteorite and other sources from within our solar system to avoid your counterclaim that all of these are from Earth sources originally, like the lakes of methane and ethane on the surface of Titan. Quite a few of these interstallar compounds are organic. Either God spread them around widely at the time of creation, or there are processes that result in their formation even in deep space with no possibility of Earth origin. Either way, the ubiquity of these compounds (like methane, carbon monoxide, formaldehyde, benzene, and others) means there is no need to propose a terrestrial origin for all organic compounds.

Mercury ice must have come from earth | Conservative News and Views

[…] it is all very well, as a near-apoplectic commenter said to this writer in the last twenty-four hours, Yes Terry, [Walt Brown did show that the Mercury ice […]

[…] it is all very well to say, as a near-apoplectic commenter said to this writer in the last twenty-four hours, Yes Terry, [Walt Brown did show that the Mercury ice […]