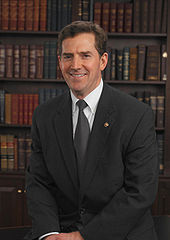 Jim DeMint first won election to the Senate in 2004. In that year, Senator Ernest “Fritz” Hollings retired. Jim DeMint quickly became one of the most conservative members of the Senate. When, in 2009, Rick Santelli famously called for a repeat of the Boston Tea Party, Jim DeMint joined that movement quickly and became the Tea Party voice in the Senate.

DeMint also pledged to serve no more than two terms in the Senate. He won his second term in 2010. Everyone expected him to stay in the Senate through 2016.

But now, two things probably worked to persuade him to leave the Senate. First, Barack Obama not only won re-election but managed also to get more Democrats elected to the Senate. They don’t make a filibuster-proof majority, but they do make any conservative achievement in the Senate impossible. Second, Ed Feulner, founder and head of the Heritage Foundation, decided to retire. And he picked Jim DeMint to take it over.

In his press release, Jim DeMint explained as best anyone could his reasons for leaving:

It’s been an honor to serve the people of South Carolina in United States Senate for the past eight years. But now [I must] pass the torch to someone else and take on a new role in the fight for America’s future.

That role will be head of the Heritage Foundation. That’s the largest group of its kind in America, and has won the greatest respect.

People react to the news in one of two ways. Ed Morrissey at HotAir.com laments that Jim DeMint will leave the Senate. To Morrissey, the Senate is where it’s at. If you think that way, then you want a strong voice like his in the Senate. But remember: he said he wouldn’t make a career of the Senate. (In case anybody forgot this, he reminded them in his press release.)

And the Senate’s balance of power will not change. Daniel Henninger at The Wall Street Journal points this out. Governor Nikki Haley will name someone to replace him. The Constitution (Amendment XVII) makes that happen. (And many will compete fiercely for that honor! One of them: State Senator Tom Davis. Another: Tim Scott, Jim DeMint’s own choice.) Whomever she appoints, will serve until 2014 and then run for the two-year rump term. And Senator Lindsey Graham, also of South Carolina, will have to run side-by-side with this man. That should make quite a noise.

Still, Morrissey wanted Jim DeMint to stay inside the government, not outside. Erick Erickson at RedState.com disagrees. Erickson names all the new Senators that Jim DeMint recruited and put there, all but singlehandedly:  Pat Toomey, Rand Paul, Mike Lee, Marco Rubio, Jeff Flake, Ron Johnson, and Ted Cruz. Any one of these men, but especially Rand Paul, can easily take up where Jim DeMint will leave off.

Ed Feulner, meanwhile, was getting old, and knew it. So he made sure someone with a fire inside him would lead at Heritage. That someone is Jim DeMint.

In fact, Jim DeMint will do something for Heritage that even Erickson misses. Heritage was suffering from a disease almost like hardening of the arteries in the brain. Its ideas were getting stale fast. But with Jim DeMint running things at Heritage, that will stop. Now Heritage will once again be the dynamic force for change-for-the-good it started out as.

Furthermore, the Tea Party just scored a grand coup. They have taken over the Heritage Foundation. What that means, will take a little time to sink in. But when it does, look out.

Related Topics:electionpoliticiansTea Party
Up Next