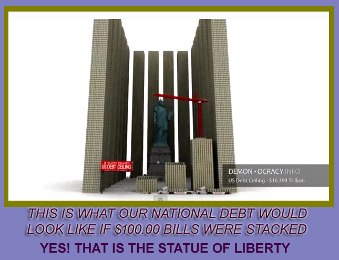 Congress did not avert the “fiscal cliff.” This government went over that cliff long ago. The numbers, when you read them, tell the tale.

Question! Can a person who smokes 40 cigarettes a day, suffering from full-blown lung cancer avert a miserable demise by cutting out one cigarette a week? Can a bloody mess of mangled bodies and twisted steel be averted if the vehicle, traveling 100 mph, racing towards a concrete bridge abutment reduces its speed by 1/2 mile per hour?

The very first thing you need to know, if you don’t already, is that the so-called “fiscal cliff” was not averted as a result of this past week’s budget deal. Something can not be averted which has already occurred. Not only did these fools of financial Armageddon not cut one cigarette or slow down by 1/2 mph, they doubled down. 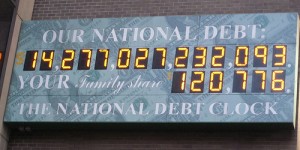 The National Debt Clock shows the total national debt and each citizen and lawful resident’s share of it. Photo: Hampton Roads Partnership, CC BY 2.0

To some, facts, numbers and statistics are boring, but keep in mind that is exactly what both parties want you to think and why, for so long, they have gotten away with the murder of our financial future. Please take just a few minutes to review the numbers on this last budget agreement. But, to start, let’s call it what it was and will be. Not an avoidance of the fiscal cliff. No, it was a bi-partisan financial suicide pact.

About the Usurper. This past week he has told the world that he does not consider spending to be the problem and ignores his nearly $6 Trillion deficit as well as the $16.4 Trillion US debt. In fact, for his agenda, which is to destroy our capitalistic economy and replace it with a Marxist Utopian society, over-spending is not a problem. It is the tool.

Facts on this suicide pact everyone should know:

This Fiscal Cliff thing was, just as every other political phraseology has been, just another made up crisis scenario used to perpetrate yet another occasion to further destroy our country. Oh yea!, There is a crisis alright. But the train is already headed to the bottom of the canyon. This bi-partisan suicide pact did not slow it down. It actually sped it up.

Will the GOP take the deficit spending tool out of Obama’s hands? The answer is, no. They will not stop his intentional economic destruction and they will go down in history as equal partners.

Related Topics:economyfinanceTea Party
Up Next

Bernanke sets up a crash

Taxation without representation in 2012

Politics aside (silly to say) of weather it is right/fair to have a progressive tax system;

Given these points, I find it hard to expect it is reasonable to describe someone with a net worth over 50 times the median 2012 figure and 10 times “upper-income” figure and would probably be in the top 5% of households to be “middle [or] upper-middle class”.

wow, should habe been “weather it is right/fair” not “weather…”. That was an embarrassing homophone mistake to make.

wow, should have been “weather it is right/fair” not “weather…”. That was an embarrassing homophone mistake to make.

“Thou shalt not covet thy neighbor’s house.” Or his estate. And that’s what your proposition is all about: envy. Never a good part of public policy.