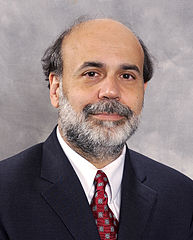 Don’t let that nice, comfortable grandfatherly look on Mr. Bernanke’s face fool you. He is as evil and destructive as George Soros and all the anti-American projects he funds. For those of us who have religious backgrounds the words “Father, forgive them for they know not what they do” can soften our hearts for those that have done wrong in an attempt to do right.

Bernanke knows what he is doing

This is where our morality must part with the likes of Mr. Bernanke. For he knows exactly what he is doing. His motives are personal and ideological in support of a progressive, left wing boss, who happens to be usurping the Presidency of the United States.

He lied to Congress on several occasions concerning Quantitative Easing. That is a clever term but can be better described as “devaluing the dollar and destroying people on fixed incomes by way of the printing press.” Time after time, this perjurer has sworn not to monetize our currency and debt by use of Quantitative Easing, then promptly begins doing just that.

For many who see the stock market in record territory and think that is a good thing, much caution is required. When your government produces money from thin air, it finds its way to the bond markets and then the stock market. This looks good for the administration, creates a false sense of economic growth, when it is exactly the opposite.

The danger here is that for the millions of Americans who may be sitting on the side lines watching the market rise the temptation to re-invest can be over whelming. That of course is just what the big money traders want. Its a simple game, but people are caught in it over an over again. This time, the game could end in catastrophe.

Have you seen this before?

Warning: This next stock market crash may be the worst the world has ever seen. Its coming. When money stops flowing from Bernanke, the selling frenzy will begin. The value of the dollar has so badly been degraded, hyper-inflation will follow. Once it starts, nothing will be able to stop it.

What then will follow? Fear? Food shortages? Civil unrest? Martial Law?
Now, ask yourself: who would benefit from such a scenario?

Cyprus – canary in the mine

~ Bernanke sets up a crash ~