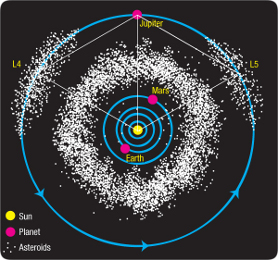 The near-earth asteroid 2012 DA14 makes the case for the Hydroplate Theory of the Global Flood, for a simple reason. No asteroid, if it formed in a belt between Mars and Jupiter, should fly so close to earth. Not unless it came from earth to begin with.

NASA announced yesterday (per USA Today) that asteroid 2012 DA14 will pass very close to earth within one week. It will fly to an altitude of 17,100 miles. This is inside the geostationary earth orbit of communications satellites, but outside the low-earth orbit of, say, Global Positioning satellites.

This asteroid is about half the size of a football field, at least in frontal section. (You can watch an animation from NASA/JPL-Caltech here.) If it took a dive for earth, it could wipe out a city the size of New York if it hit it dead-center. NASA insists this will not happen. (NASA does admit the bare chance that the asteroid will take out a satellite. So if you lose your connection a week from now, you’ll know why. Just saying.)

USA Today quotes Donald Yeomans, of JPL-Caltech, as saying that asteroids this side do hit the earth every 1200 years. He did not say how soon we are “due” for another.

Nor does Yeomans, or anyone else, answer this question: how could 2012 DA14, or any asteroid, fly so close? Did not all asteroids form in a belt between Mars and Jupiter? The story goes (straight from NASA) that the ring of dust in the solar nebula, between Mars and Jupiter, formed rocks and boulders but never a planet. NASA directs interested readers to this source, called “The Nine Planets,” for more details. That source reminds us, by the way, that all the asteroids together weigh less than the Moon. (That’s why almost no one believes, anymore, that asteroids came from a planet that passed too close to Jupiter, which then ripped it apart.) This source also mentions near-earth asteroids (the Aten, Apollo, and Amor classes) and Trojan asteroids (in the leading and trailing Trojan Points in Jupiter’s orbit).

“Nine Planets” admits several questions that astronomers have not settled. Among them:

The Hydroplate Theory answers those questions. The failed-planet theory does not.

The Hydroplate Theory as it applies to asteroids

The Hydroplate Theory takes its name from the hydroplates into which the earth’s crust broke up in the event that produced the Flood. In that event, the earth’s crust cracked open and released a gusher of water, under pressure, along what became the Mid-Oceanic Ridge. Those plates rode on a cushion of water beneath the crust. As this water rushed out, the bottom of this sub-crustal ocean deformed. The plates of the “top crust” rushed either away from or toward one another, and produced the mountains we know today.

But when all that water rushed out into the air, much of it rushed into outer space. It carried with it a lot of rock and mud. Whatever didn’t fall back to earth (as the hardest rain the earth would ever know, so hard that Hebrew has a special word for it), flew away from earth. It flew far enough to come together as either comets (mostly water) or asteroids and meteoroids (mostly rock).

So to answer the open questions that “The Nine Planets” mentions (again, see Brown’s discussion for details):

Diagram of the asteroid belt and the Trojan asteroids of Jupiter. Graphic: Center for Scientific Creation. Used by permission.

As asteroids formed, water vapor striking them on their hot sides (toward the sun) would produce a greater water-jet effect than vapor striking them on their cold sides. This pushed the asteroids out from the sun until they were too far away for the different jet effects to matter. For ninety percent of all asteroids, this distance lay between Mars and Jupiter. Many others fell into the leading and trailing Trojan points (L4 and L5 in the diagram at right).

The failed-planet theory would have the same chance of putting an asteroid into the lead Trojan point as the trailing. Not so the Hydroplate Theory. According to it, the water-jet effects (see above) are pushing the asteroids out, while they are still moving in prograde orbits. So they don’t move straight out; they spiral out. Now if they land in the lead Trojan point, Jupiter will slow them down so they are less likely to fly back out. If they land in the trailing Trojan point, Jupiter tends to pull them toward itself and out of that Trojan point. (Jupiter did capture some of those asteroids, but not nearly as many as are in the Trojan points.)

Result: we see 1068 lead Trojan asteroids and 681 trailing Trojans. The Law of Averages gives that outcome one chance in a trillion of happening, if asteroids formed in the main belt.

Near earth asteroids are even less likely to come from the main belt. What could have slowed them down and sent them spiraling back in to earth? The laws of orbital mechanics simply do not allow this.

But if the asteroids came from earth to begin with, that solves the problem. Asteroid 2012 DA14 takes its name in part from the year astronomers discovered it (last year). This asteroid rushed out on a high-arc trajectory (literally a “throwing-across course”). It spent 3,000 years flying out, turned around, and came falling back. That’s why we haven’t seen it before. And when it passes the earth, it will dive deeper into the solar system. We may never see it again.

Other near-earth asteroids have stayed closer to earth, or in earth orbit, since they formed. They include the horseshoe asteroids (3753 Cruithne, 2010 SO16, 2002 AA29, and others) that move between the lead and trailing Trojan points of earth’s orbit. No object of those sizes could have fallen out of the main belt and then, as easy as you please, settled in as traveling companions to earth. Instead, these objects barely escaped earth and did not spiral out with the rest.

Brown notes one other thing that relates to this question. Notice that neither Mercury nor Venus has a moon, though every other planet (and most of the dwarf planets, and 200 larger asteroids) have moons. If any asteroids fell out of the main belt, and Mars, for example, captured two of them (Phobos and Deimos), then why didn’t Venus and Mercury capture their share? But if you assume that asteroids came from earth, you realize that no asteroid would move inward toward Venus or Mercury. (If the Lord tarries for another 8000 years, Venus might dislodge Asteroid 3753 Cruithne. But Venus is not likely to “steal” it away from earth.)

Astronomers have always speculated on what asteroids are made of. Today the Times of India reported that NASA will send a probe to land on an asteroid, use a tiny crane to dig out a sample, then come back to earth. The landing will happen in 2018. Then (if the Lord tarries that long), for the first time, we will find out exactly what an asteroid is made of.

Weather commentator Tony Hake (examiner.com) said today (February 11, 2013) that an anchor at CNN suggested that Asteroid 2012 DA 14 was an effect of global warming! This was a joke…wasn’t it?

Mercury ice should have blown away in meteor showers

Now that Ash Wednesday has passed, has Dr Brown had time to address the questions about the energy returned to the Earth from material that did not achieve escape velocity during the Flood? Or of what model of meteorite impacts he uses to back up his assertion that ice on Mercury must be only thousands of years old? Can you at least confirm that you have passed these questions on to him and have not yet received a reply?

Setting those unanswered issues aside, where did you get your information that 2012 DA14 has been on a high-arc trajectory for the last 3000 years? Hasn’t it been ~4300 years since the Flood? 2012 DA14 was in an orbit with a period of 368 days until its recent close passage to Earth; sometimes closer to the Sun, sometimes farther away, with two points in space where the orbits intersected. This time around both Earth and 2012 DA14 happened to be very, very close to one of those intersection points at the same time. Further observation will have to be done to determine what its orbital characteristics will be from here out, but it will shift to a smaller orbit closer to the Sun, with a period of around 317 days. We’ll approach it closely again in 2046 or so when we happen to be in the right portions of our respective orbits (dates subject to future revision as the new orbit is nailed down by further observation).

So, did the interaction between Earth and 2012 DA14 result in the asteroid changing its orbit or not?

So are you suggesting that, like a bullet fired into the air which falls back to earth, it climbed for 2200 years and then fell back for 2200? It failed to achieve escape velocity and has come crashing back down? Or are you proposing something else?

Did you pass those questions on to Dr. Brown, by the way?

If I were you I would suggest that it did achieve escape velocity but was on a circumsolar orbit that intersected that of earth; eventually it and Earth occupied nearly the same point in space on their respective orbits. It hasn’t been traveling ‘out’ from anything from 2200 years or ‘back’ to anything for 2200 years. The distance between 2012 DA14 and Earth oscillates in a complicated fashion around some mean value, just like the distance between Earth and Venus or Earth and Mars does depending on orbital resonance. 2012 DA14 isn’t in some highly elliptical orbit of Earth at all, much less one with an orbital period of 4000 years.