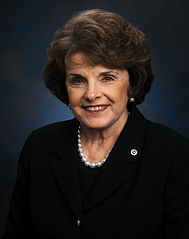 Senator Dianne Feinstein (D-CA) finally had a colleague bring her up short on how much she knew about the Constitution. In answer she said, “I am not a sixth grader!” Senator Feinstein, if you are indeed not a sixth grader, stop acting like one.

On Thursday (March 14), the Senate Judiciary Committee passed Dianne Feinstein’s signature gun control bill. That bill names 158 specific models of guns that happen to look like light-infantry guns. The AR-15 Bushmaster tops the list, of course. This bill also exempts government officials from this ban. (It also names 2271 guns that it will not ban. Does Dianne Feinstein expect us to thank her for that?) Daniel Halper at The Weekly Standard has the details. The scan at right (courtesy of The Huffington Post) lists the 158 forbidden gun types. (David Sherfinski of The Washington Times reports here.) Anyone who is part of the “American gun culture” knows that you can take any gun that looks like a soldier’s gun, change one part (like the hand grip), and you have a perfectly legal gun that works the same way. Furthermore, at least two politicians have already admitted that the only way to control guns is to take them away from people.

Which brings up the other part of this Act. Even if the gun you have is “exempt,” you still have to submit your fingerprints and so on to buy or sell it. So the government will build a database of gun owners. That will be all they need to come knocking on your door: “Hand over your weapons.”

Remember also: this is the same Dianne Feinstein who once said (Clip One, go!) that if she could have lined up fifty-one co-sponsors of a bill to take everyone’s guns away, she would have done it. “The votes were not here,” she said. Senator, neither was the Constitution. More recently she said (Clip Two, go!) current law lets you “hunt humans.”

Remember I called her a neo-aristocrat? Well, last Thursday it got worse.

Senator Ted Cruz (R-TX) finally asked Dianne Feinstein the obvious question: where does the Constitution authorize any such law as she proposes? Halper has the key words (Clip Three, go!):

DIANNE FEINSTEIN: I’m not a sixth grader. Senator, I’ve been on this committee for 20 years. I was a mayor for nine years. I walked in, I saw people shot. I’ve looked at bodies that have been shot with these weapons. I’ve seen the bullets that implode. In Sandy Hook, youngsters were dismembered. Look, there are other weapons. I’ve been up – I’m not a lawyer, but after 20 years I’ve been up close and personal to the Constitution. I have great respect for it. This doesn’t mean that weapons of war and the Heller decision clearly points out three exceptions, two of which are pertinent here. And so I – you know, it’s fine you want to lecture me on the Constitution. I appreciate it. Just know I’ve been here for a long time. I’ve passed on a number of bills. I’ve studied the Constitution myself. I am reasonably well educated, and I thank you for the lecture.

Senator, that education doesn’t seem to have taken. For one thing, you didn’t answer the question. (And Senator Cruz called you on it.) For another, I don’t suppose you ever thought that maybe – just maybe – if the targets of those weapons, or in one case the adults charged to guard the targets, were themselves armed, the outcome would have been quite different. In your unseemly astynomicophilia (an obsessive love for the police), you assume that no person, save a police officer, an active-duty armed service member, or possibly your personal bodyguard (or that of the de facto President), should so much as touch a gun.

This bill exempts. Two thousand. Two hundred. And seventeen. Weapons. Isn’t that enough for the people of the United States?

Well, ex-cu-u-use me! Senator, it is not for you to say what is and what is not enough!

Do they need a bazooka? Do they need other high-powered weapons that military people use to kill in close combat? I don’t think so.

Senator, what you think in that regard is incompetent, irrelevant, and immaterial.

Ted Cruz finally got Dianne Feinstein to admit the government had no power to ban books. Then, as Philip Hodges at Political Outcast reports, other Democratic Senators said, “But we ban child pornography.” So on that account she said such a ban should stand.

Afterward, she gave an interview to a sympathetic (make that sycophantic) “journalist” (Clip Five, go!):

I felt patronized. I felt he was somewhat arrogant about it.

Senator, if anyone was being arrogant, you were. Arrogant and patronizing both.

The Second Amendment is the reset button on the Constitution

Here is what a Dianne Feinstein can never understand: The Second Amendment is the reset button on the Constitution. That bazooka would indeed have a place in a militia armory – so long as a civilian, not part of the government, held the keys. (Clip Six, go!) This is what James Madison meant when he wrote:

Not once in that exchange, nor indeed ever in the debate on her bill, has Dianne Feinstein set any limit at all on what the Constitution lets her do or propose. In fact, Ted Cruz was right. Dianne Feinstein has no more business cutting out a list of forbidden weapons than she would have making a list of forbidden books. Or saying that the Constitution protects only some people from unreasonable search and seizure.

Anthony Martin (a/k/a The Welshman, a/k/a National Conservative Examiner) thinks Dianne Feinstein is not fit to hold office. He’s right. If the Senate had any honor, it would expel Dianne Feinstein, and anyone else who thinks raw emotion can trump the Constitution.

Coup d’état or playing with toys?