Naturally this has the Internet, the media, and conservative and Patriot circles buzzing. Now liberals buzz about why conservatives laugh at a “President” who needs a Presidential Taster. This debate says more than you might think about where we have come as a country. It tells us what the de facto President most fears, and why we should fear him in turn.

Nicholas Ballasy of The Daily Caller had the report, and the recording. (Sorry, no embed; WordPress forbids JavaScript embedding scripts.) Senator Susan Collins (R-ME) was hostess. Now she is not a conservative. (What conservative would have let Obamacare come to the floor of the Senate when she had the chance to stop it?) And if you play the tape, you’ll hear her graciously tell what happened. First she describes the meal: lobster salad, potato chips, and blueberry pie à la mode. Everyone enjoyed it – except Obama. An incredulous reporter asked, “Why?!?” Her reply:

That’s what she said. And that seems to be what Obama said. What does this mean? That the President has an official Presidential Taster. That he has one person who samples all his food, and no one can substitute for him.

This isn’t the first we hear of a Presidential Taster. When Obama visited France four years ago, he had a taster with him. Agence France-Presse tells what happened at a little French restaurant where the Obamas dropped in:

It wasn’t very pleasant for the cooks at first, but the person was very nice and was relaxed, so it all went well.

What’s the matter? Is this really the first time a President has gone abroad and had someone taste his food at a local restaurant?

Did an earlier President ever have a Presidential Taster? 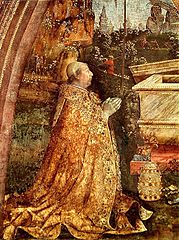 Pope Alexander VI. From a fresco of the Renaissance. Photo: Thomas Gun, from a painting by Pinturicchio.

Instead, any member of the Presidential protective detail might sample Presidential food ahead of time. This is only logical. Why would the Secret Service employ or work with one Presidential Taster? Would not the detail members instead draw straws to decide who among them would take that risk at any given instant?

In fact, anyone thinking to poison a President would never know in advance who would do the “Presidential Taster” job. Bill Clinton didn’t even insist on a taster every time. George H. W. Bush would bring someone to taste his food, but never the same person twice. Sometimes Secret Service agents would do the honor; sometimes Navy steward’s mates would. And of course, before the Presidential transport takes off with him aboard (under the “Air Force One” call sign), it carries fresh meat, fruits, and vegetables. The Secret Service buys this from a local grocer that they choose almost at random, presumably in or near Upper Marlboro, Maryland, the nearest town to Joint Base Andrews. So if you’re going to poison the President, you have to find out what store the Service will go to,. Then you must slip the mickey in just as the agents walk up to the table in the produce, meat, or whatever department.

Adams describes one incident during Ronald Reagan’s term. According to his account, Reagan was at the opening baseball game in Baltimore in 1984. Someone wanted a shot of him eating a hot dog. His protectors picked out a hot dog seller at random, ordered a hot dog, and trusted to luck. It paid off; Reagan lived to win another term and serve it out.

What happened this time? 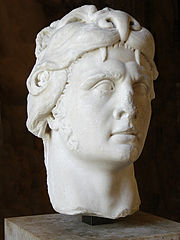 A Secret Service agent is ready to take a bullet for whomever he protects. That goes double for the President. Right? So if the designated Presidential Taster doesn’t show, that suddenly means the President can’t trust the meal? Why couldn’t another agent substitute in? Let them draw straws, and let them take no volunteers. Besides, as Senator Collins said, if something was wrong with the food, any Senator would already have fallen ill.

This silly scene can only mean that this (de facto) President is afraid of his own protective detail. He recruits one Presidential Taster, and trusts no one else. (Very dangerous. As Pope Alexander VI could have told him, absolutely every person has his or her price.) And when that person did not show, Obama assumed that not only Senator Collins but all those other Senators, and his own Secret Service detail, might be in on a plot to poison him. So he could not simply let his agents draw straws to choose a fill-in Presidential Taster. What did he think – that whoever might stand in as Presidential Taster, had already immunized himself against poison, as Mithridates VI of Pontus famously did?

CNAV has no Medical A Team, nor a Keith Ablow on staff. But we can guess what Dr. Ablow would say: paranoid ideation. Or in plain English: nuts.

But the problem is worse than that. If Barack Obama really feels that way about his fellow citizens, what does that say about his SecHomeSec buying 1.6 billion rounds of ammunition, and 2717 Iraq War Marine surplus light tanks to deploy on American streets?