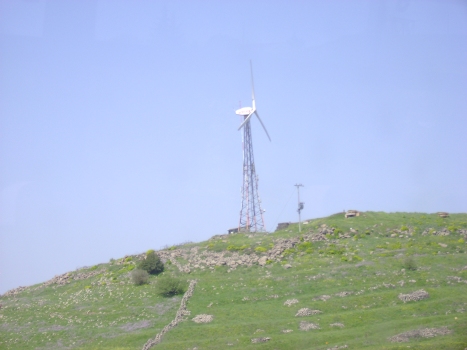 De facto President Obama insists on making the “sequester” hurt as much as possible. Or so he thinks. But one executive, in an industry that takes many government subsidies, doesn’t want any more. In fact, he says the government should get out of the subsidy business. That, he says, would force his industry to concentrate on fundamentals, not on playing political games.

Who is Patrick Jenevein?

E. Patrick Jenevein III, in 1986, founded The Nolan Group. That group later became the general partner of the Tang Energy Group. That company began life as an oil-and-gas company. Pat Jenevein describes it himself, in an opinion piece in today’s Wall Street Journal:

My own company began by delivering clean energy (in the form of natural gas) to rural China, where families still used animal dung for cooking fuel. We entered the wind business in the late 1990s, when a wind-turbine company asked us to provide electricity from its site when the wind wasn’t blowing. Years later, we oversaw a similar project but in reverse: In 2008, without a government subsidy, we built a wind farm in Lubbock, Texas, to supplement at lower costs the delivery of electricity to a cottonseed-oil company.

Pat Jenevein’s own experience shows how wind energy really works. First, it needs a back-up when the wind doesn’t blow. Second, wind turbines do have their place – typically where the wind blows the hardest on average, and where a little extra electricity from the wind can make the difference between success or failure for companies or communities that use it.

Political subsidies – and the sequester 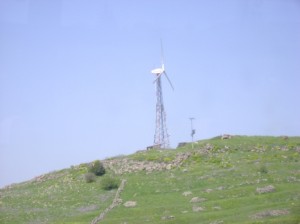 One of a string of windmills on the Golan Heights in Israel. Photo: CNAV.

But politicians often insist that wind should replace fossil fuels, merely because wind is wind, hence “green” and “clean,” and fossil fuels are fossil fuels, hence “dirty.” So the government subsidizes wind, as it subsidizes solar power and trying to grow crops literally to burn. Pat Jenevein describes exactly how much subsidy wind gets:

Since 2009, as part of the president’s stimulus, wind-farm developers [can] get a federal cash grant or tax credit covering up to 30% of their capital investment in a new project. This is especially attractive compared with another tax credit that rewards wind farms based on how much power they actually produce. Through May 2012, according to the National Renewable Energy Laboratory, Washington spent some $8.4 billion on these cash grants.

And what have wind-farm developers done with this money? They have built wind farms where the wind does not blow nearly hard enough for those farms to work. Result: the cost of electricity from the wind has gone up by more than a third.

Wind-farm builders also belly up to the trough, as anyone would expect.

A quick glance at the American Wind Energy Association’s website illustrates this. In July, the association is planning a Capitol Hill event aimed at “educating legislators” on the importance of industry tax credits. Never mind improving the underlying fundamentals of the wind business.

Enter the sequester. The sequester will trim that by 8.7 percent over this spring, summer and fall. And Pat Jenevein, who believes in efficiency, welcomes this.

Without subsidies, the wind industry would be forced to take a hard fresh look at its product. Fewer wind farms would be built, eliminating the market-distorting glut. And if there is truly a need for wind energy, entrepreneurs who improve the business’s fundamentals will find a way to compete.

Pat Jenevein knows something many of his competitors don’t: government subsidies are like a hook. The government pays you to be less efficient. Once you do that, you depend on government to keep going.

Pat Jenevein could not be reached directly for comment. Your correspondent does remember him; we literally went to high school together (Class of 1976). But here’s a clue. Look again at the year Pat Jenevein founded the Nolan Group: 1986. That’s right: during the Reagan administration. Come to think of it, Ronald Reagan was very popular among the 1976 senior class when he ran for President in that year. (Reagan spoke at our school’s Commencement after we had both graduated.)

Barack Obama is trying to un-teach that lesson. But the sequester won’t let him. And to see one who he would expect to clamor for a subsidy, turn it down, can’t make Obama feel good about his agenda, or his ideology.