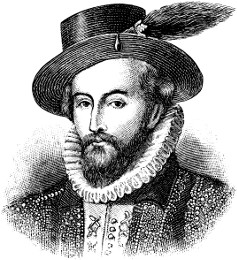 (This lesson is based on Chapter 5 of The Light and the Glory, 2nd edition.) England soon sent settlers to the New World. Like the Spaniards before them, the English were also enticed by the riches of the Americas but they had the advantage of knowing the history of the Spaniards. This knowledge guided them in making better decisions about the men they sent to America. However, they sent men and not angels, so mistakes were still made.

CONSIDER: All throughout the Bible, God called men (and sometimes women) to fulfill His missions. They often resorted to their own humanity, and when they did, their missions suffered.

QUESTION: It is often said that the ends justify the means. The ends are important, but so are the means. If a person fails at their mission but remains true to God, do ou think God is pleased with that person? Conversely, if a person accomplishes their mission but uses means that would displease God, have they accomplished anything in the eyes of God? Consider the lives of the martyrs.

Soon Walter Raleigh, who envisioned himself as both an explorer and an adventurer, developed a passion for building an English colony in America. He also developed a personal relationship with Queen Elizabeth I. Although the Queen’s favor resulted in many riches for Raleigh, she didn’t initially allow him to go to sea. When she did agree in 1584, she stipulated that he organize an expedition but could not accompany the expedition physically.

QUESTION: After reading the chapter, do you think Raleigh’s presence on the expeditions that followed would have made any difference in their success or failure?

QUESTION: Do you think Raleigh staying in England may have helped keep the plans on track even when things went wrong?

Raleigh organized a successful trip and the English developed a good relationship and lively trade with the native Algonquin Indians when they arrived at the Outer Banks of Cape Hatteras. However, all was not good and English made some of the same mistakes Columbus made and “took” two Indians back with them to England to learn the language. One of the Indians was cooperative and the other was quite melancholy and reluctant to cooperate.

QUESTION: Although the English treated the Indians with more respect than the Spaniards, do you think they still exhibited an elitist’s attitude? Why?

A business plan – and an angry outburst

Raleigh realized that a new venture to settle a colony in America would require the financial backing of the Queen, and he developed an appeal to her that would resemble what today would be called a business plan, which also included soliciting the Queen’s vision. The Queen counter-offered and stipulated that the colony had to be called “Virginia” (after the Virgin Queen, as she was called), and that the cost had to be reduced by half. In return, she also knighted Raleigh. Raleigh, understanding the debacles of the past, also planned to have one or two preachers appointed in order to honor God.

QUESTION: Do you think the preachers made a difference? What do you base this on?

The sea voyage went well for Sir Richard Greenville, but he would have to depend on the Indians for supplies since bad judgment destroyed their supply ship and all they brought with them. Greenville negotiated with the Indians and created a strict code of conduct to help their cause. Things went well until Greenville returned to his ship to find his silver drinking cup was missing. This sent him into a rage and he ordered men back to the village to burn down the Indian houses and destroy their corn. After this episode, word spread throughout the area and all natives avoided them completely.

QUESTION: In spite of acting rationally most of the time, Greenville nearly ruined their chances of survival in one fit of anger. Has a fit of anger ever undone good work you have done? The Bible says that one of the fruits of the spirit is “self control” and another is “patience.” We can often see how not having these fruits affect other lives but can we see that in ourselves? If so, what have you done to develop these fruits in your own life?

QUESTION: After 9/11/2001, we all wanted pay-back, and to tell the truth, many were happy when President Bush declared war on Afghanistan and Iraq. In hindsight, do you think this was wise?

Greenville eventually established a settlement on Roanoke, which included housing, stables, and armory and a church. After which Greenville departed for England, leaving behind gentlemen, soldiers, and a few artisans. None of the settlers were farmers and were ill-equipped to provide for themselves. The English brought with them diseases for which the Indians had no immunities. This meant that after the English landed, the Indians began to die quickly from the English diseases.

QUESTION: Given that oft times survival in the New World depended on the Indians, do you think this attitude of “lording” it over the Indians was wise? Is it ever wise or productive to “lord” it over anyone.

QUESTION: Consider Christ. He came as a servant, washing the feet of the Apostles. What do you think He would say about the way the Indians were treated?

QUESTION: Indian King Wingina, in spite of his fragile relationship with the English, taught the settlers how to survive on their own. Who displayed more “Christianly” behavior: the Indians or the English?

Meanwhile, King Wingina shifted again and plotted against the English, who outsmarted them and annihilated Wingina. Drake tried to bring supplies to the colonists but storms scattered the fleet and sunk many of the supplies, which meant they were once again at the mercy of the Indians. Lane decided to leave with Drake, which was unfortunate, since supplies sent by Raleigh would arrive four days later. Three weeks later Greenville arrived with 400 soldiers and enough supplies for the entire company for a year. Greenville made another bad decision and left 15 of the 400 soldiers to occupy the settlement.

Back in England, Drake was regarded as a hero while Lane was regarded as a failure. It was written that his failure was judgment upon him by God for the way they treated the Indians. The bad news about Roanoke seemed to increase and Thomas Harriot wrote a piece to encourage future backers that included mentioning tobacco, which caught on in England. Tobacco then became the gold of Roanoke.

When Raleigh planned the new expedition to Roanoke, he had a hard time finding a governor. Additionally, in light of all the “bad” press the former expeditions were receiving, it was also difficult to find colonists. This resulted in people being chosen that were not the “cream of the crop.” But did include 14 couples, which hadn’t been done before. Raleigh managed to equip one ship and two smaller boats. Unfortunately, the smaller boat, which contained many of the supplies, fell to mutiny at the leadership of Fernandez. Since the expedition under White was weak, Fernandez was not hung, as he should have been, but gained control of the ship.

Fernandez delivered the colonists to Roanoke instead of Chesapeake, as had been planned. At Roanoke they discovered that it had been abandoned by the handful of men Greenville left behind, which they learned had been massacred.

The roller coaster ride continued. Supplies arrived and then another colonist was murdered. White attempted to have a peace conference with the Indians, who did not show up. So White impulsively decided to attack the Indians. They soon abandoned these plans when they realized they were attacking the only native friends they had. They tried to make amends.

CONSIDER: Fear. The Bible says: “The fear of man brings a snare, but whoever trusts in the Lord shall be safe.” Proverbs 29:25.

QUESTION: Do you think fear played a part in the bad decisions of the Englishmen? Have you ever made foolish decisions based on fear? Have you ever not done what you believe in your heart you should have done because of fear?

After discovering that the settlement didn’t have enough supplies to last through the season, White decided to report back to Raleigh. But England was now being threatened by Spain and couldn’t spare their resources. When White reported to Raleigh that the settlers had landed in Roanoke instead of the Chesapeake, Raleigh realized that the supply ship send was headed for the Chesapeake, and he had to send another. However, the Queen required all of Raleigh’s resources to be devoted to the war. She did, however, allow two small boats to be sent back to Roanoke with supplies. The boats were attacked by French pirates and White had to return to England.

CONSIDER: During all this time the colonists were in dire straits.

The war happened. After it took a year and a half until Raleigh could turn his attentions back to Roanoke. It took another year before White could return to Roanoke. The trip from the ship to the shoreline wreaked with peril. In the meantime, the settlers had moved to Croatoan Island. Captain Cocke was aware of the impending change of the season and would not bring White to Croatoan. The colonists were on their own.