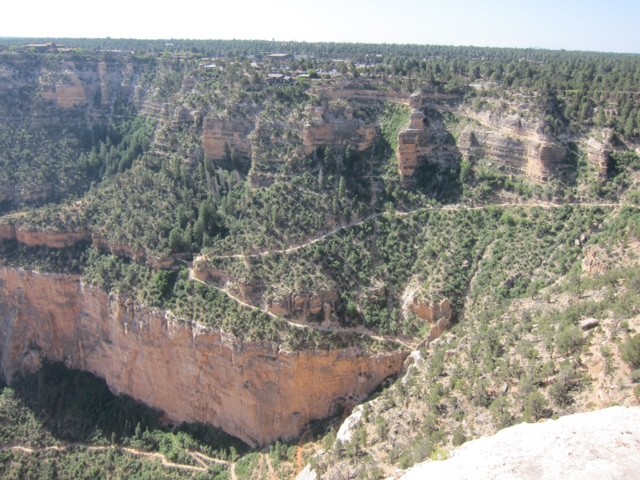 Okay, so TPATH readers have become accustomed to reading about political and world events, terrorists and communists and illegal usurpers. So what are we doing discussing this Geological Unconformity?

For starters, our culture and many other cultures throughout history, have been guided by and structured around the morality of a Supreme Being. Conversely, civilizations in the past which devolved to secularism, decayed and collapsed from within. America is now teetering on the edge of the point of no return as the progressives and communists in our society, tirelessly inch America closer to the black hole of godlessness.

The question becomes then, how do we stop the dissolution of God? It appears He may have given us the tools in the form of clues. We need only to recognize and then present them, both to ourselves and to others. Many people reject a Supreme Being, a Creator, because acknowledging Him, would force a great and uncomfortable change in life and activity.

Back in 1788 a geologist and philosopher, John Hutton, discovered the first unconformity at Siccar Point in Scotland. Since that time, and without much success, scientists and geologists have tried to explain them. They have offered many various explanations for why hundreds of millions of years of geological history, across the globe, have been lost, forever.

What is this unconformity? Could it be the result of our Creator, throwing yet another clue to His existence? You see, the unconformity discovered in Siccar Point is not an anomaly. Scientists have discovered that they exist in and across every continent of the world including here in America. Ours was discovered in the washout of the Grand Canyon. For many years and to this day, geologists have been trying to understand why these unconformities occurred. They suggest that oceans wiped away those layers, or earthquakes and lava flows moved the crust to vertical formations. But, since they are everywhere, separate explanations for them do not quite stand up to logical scrutiny.

Unconformities span from 350 million to as long as a billion years where no fossil activity or sediment is present. For example, carbon [sic] dating a core sample would show a layer at one point as being 1.5 million years old, then the next layer in the core would be 350 million years older. (Editor’s note: the real radiometric techniques involve decay between two metals heavier than carbon.] Within a 1/4 of an inch, millions upon millions of years of data, are missing. To put it simply, all around this earth, hundreds of millions of years of fossilization and evolution data are missing and will never be found.

The next logical question is; What occurred in the earth’s history during these extended periods of lost information? Scientists rarely agree on much, but on this they do. We will never know.

But, evolution in hyper-drive may have taken place. That is, at no time in earth’s past, have millions of species evolved, or continued to travel the line of natural selection at such a rate as it appears to have done during the unconformity period. This can only be seen by studying and comparing the front and back ends of the lost period. Unprecedented evolution changes took place relative to the studies made during the periods where changes could be studied.

What then is the next question? How about; Why did the evolution of species accelerate, as it appears to have done, during a period where all history of it has been lost and why did it change at a snail’s pace before and after the non-unconformity years?

Even those scientists who refuse to acknowledge a creator, can’t begin to understand how the complex human DNA structures could have evolved in the time period allotted, given the rate of natural selection as they know it. Mathematicians, using natural selection data, have calculated that 12 billion years would not be nearly enough time to
evolve single cell organisms to astoundingly complex human beings. To those scientists, these are just questions they haven’t found the answers to.

Did God leave just that one clue, where evolution appears to have accelerated at light speed without leaving a trace, and then slowed to a point where the life of our sun would not endure the time span required for any real evolution of genes and DNA to take place? Actually, there are more clues.

If our God and Creator wanted to leave clues to His existence, short of making a grand appearance or sacrificing another Son, the massive loss of evolutionary data, coupled with the mathematical impossibility of natural selection having advanced to where it has, He may have left other clues, breadcrumbs to heaven, if you will, for anyone who would choose to look.

Atheists, see if you can answer these questions:

It is quite possible when the Bible states we were made in the “image and likeness of God,” the authors pretty much had it right? Humans, God’s children, were designed to advance. Sheer logic dictates that no others were.

The brilliant scientists have not been able to explain what happened an instant before the big bang, or why. They are at a loss as to how, why or what happened during the unconformity years. Nor can they begin to explain why only one species naturally selected itself to consciousness or how the human being evolved to the complexity it has in so short a period relative to evolutionary data.

Not being a scientist, I can answer each of those questions with one word.

Kent Hovind: not a tax protester

Terry, have you received the audio files on Creationism which I sent to you? The best topic is yet to come.