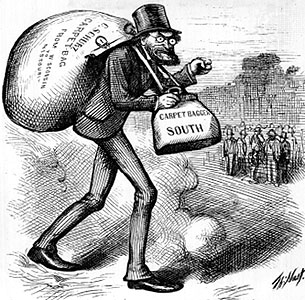 The North and the South both suffered many loses in the Civil War. Unfortunately, the Reconstruction Era – initiated to help the South rebuild – birthed new enemies who were in a unique position to exploit those in dire straits. They were called the “Carpetbaggers” – based on the carpetbag luggage they carried as these Northerners relocated to the South. While their stated mission was to rebuild the war-torn Confederate states; their personal mission was to make money – and they didn’t care how they did it.

Carpetbaggers then and now 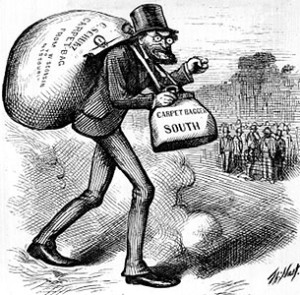 These profiteers manipulated political appointments to take advantage of those in need. Their positions enabled them to loot, plunder and profit from the despair of others – all under the cover of well-intentioned programs. But they did not do these things in a vacuum. They were able to form coalitions with Freedmen (freed slaves) and the Southern Whites, known as Scalawags.

Today the pejorative term “carpetbagger” is used to describe political candidates who run for office in a place where he or she has lived only for a short period of time. But the description is woefully inadequate. Like their Reconstruction Era counterparts, modern day carpetbaggers profit from the despair of those whom they were elected or manipulated appointments to help. And they also did not do these things in a vacuum but form coalitions with today’s willing.

Good examples of modern carpetbaggers can be found all over the country. In Newark, NJ more than a few can be found in the State-run education system. In April of 1995, the failing school district was taken over by the State and is a prime example of well-intentioned government intervention gone awry. Eighteen years later the results of the takeover are abysmal. In 1995, 25% of 11th grade students passed the State’s High School Proficiency Tests and in 2013, only 25% of the government-run school’s students entered high school after failing tests in 8th grade and out of that 25%, only 4% passed the proficiency tests. Newark remains one of the State’s highest taxpayer-funded schools with a 14 to 1 student/teacher ratio.

So, where is all the money going? Much of it is going to carpetbaggers.

A carpetbagger for today

NJ.com reported a statement made by Governor Christie: “I won’t turn it (the Newark government-run school system) back over until there is success and excellence,” He then named Cami Anderson, a New York City senior superintendent, as the city’s next schools chief. http://www.nj.com/news/index.ssf/2011/05/newark_schools_to_remain_in_st.html

How has Cami Anderson done since she took over in 2011? The answer needs to be qualified. An independent Boston-based consulting firm was hired to assess the Newark districts. Based on students’ test scores, they reported that 60 percent of Newark’s elementary and middle schools are “falling further behind.”

Cory Booker would tell you something different. A NJ.com article reported: “Booker penned Anderson’s biography for the listing and praised the “modern day freedom fighter” as having redefined expectations for children who were incarcerated or pregnant or who had “dropped out, aged out or flunked out.” He went on to say: “First in New York City, and now in Newark, Anderson, 40, has taken a system with “little accountability and no expectations, and in a short time, created a model for the country,”

Really? In the midst of reported abhorrent failure, Anderson is up for her third year of performance bonuses up to $50,000 based on the contract she negotiated with Governor Christie. In her first year she earned(?) a $41,085 bonus on top of her $247,500 base salary and rumor has it that she will be doing at least as well this year.

Anderson qualifies as a modern day Carpetbagger and Governor Christie and Cory Booker qualify as Scalawags in every sense of the word. By the way, Cory Booker is now running for the U.S. Senate seat vacated by the death of Frank Lautenberg. His opponent, the Conservative street fighter – Steve Lonegan. Booker’s campaign is being heavily funded by Hollywood-types, such as Oprah – all of whom regard the man now occupying the White House as the Messiah, while Lonegan’s campaign is being funded by grassroots activists – like me and possibly you. Hint. Hint.

In case you think that Carpetbaggers and Scalawags only thrive in New Jersey, let me cite a few other examples that you may not have given a second thought. Chances are that if you have ever paid attention to any incumbent’s political campaign, you would have heard the term “war chest.” The Federal Election Commission clearly states that campaign committee cash can’t be tapped for personal use; however, there are no such stipulations for certain political action committees, most controversially “leadership PACs” that elected officials can use to support various political causes other than their own. As you may expect, there are loopholes, such as donating the money to a charity, such as those recently created by any politician. Meredith McGehee, Policy Director at the Campaign Legal Center in Washington, stated: “Between these two sources of money, authorized campaign committee funds and leadership PACs, and considering that there are very minor restrictions, I would say that any retiring lawmaker with even an ounce of common sense can do just about anything they want with the unspent money.”

If you take an honest look at the current state of our government, chances are you would be hard-pressed to argue that those in government have done a good job of representing the people of these United States. Like Cami Anderson in Newark, however, many have done a good job of increasing their financial net worth while in office and will receive their “bonuses” upon leaving office when their war chests are dissolved.

In case you think this is a minor point, below are a few war chest statistics reported by ABC news in March of 2010 http://abcnews.go.com/Business/campaign-finance-senators-house-members-campaign-funds-retire/story?id=10203316.

Sen. Evan Bayh, D-Ind., retired with a substantial war chest. ABC asked: What would become of his $13 million campaign war chest? They went on to report that despite strict Federal Election Commission rules, Bayh and other exiting elected officials do have ways to keep unspent political contributions. And, according to the Center for Responsive Politics, there were 25 senators and representatives at that time that were collectively sitting on $31 million in authorized campaign committee cash.

SouthTownStar, a Chicago Sun Times online publication, reported that the Illinois State Board of Elections records show that $104,000,000 was being held in the 3,507 campaign funds controlled by State at the end of 2010. With the richest being that of Chicago Mayor Rahm Emanuel, with more than $8.3 MILLION! Not far behind was Ald. Edward M. Burke with funds totaling $8.1 MILLION – all this in spite of Chicago’s abysmal crime rate. http://southtownstar.suntimes.com/news/3928102-418/the-watchdogs-illinois-50-richest-political-war-chests.html.

Whatever it is that these so-called public servants do with this money, they do not leave office poor men and women and they do not return the excess money to their contributors or the people they were honor-bound to serve. Today we may call them Congressmen and Congresswomen, or Governors, or Mayors, or maybe School superintendents, but if they financially benefit from the despair of others and fail to perform as expected, I call them Carpetbaggers and Scalawags. And like their historic counterparts, they exploit and profit handsomely from the misfortune of others, create divisions among us to serve their own financial portfolios, and use their celebrity and the media to protect their cohorts.

Get ’em while they’re young

When Light Shines Out of Darkness