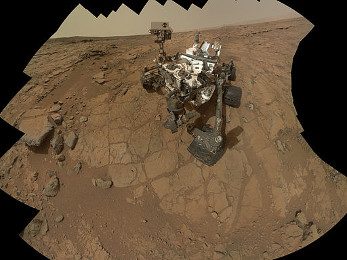 Yesterday, the journal Science published several provocative reports about new geological findings on Mars. These findings come from the Mars Science Laboratory, that the world called “the Curiosity rover.” In swift sequence, the world heard of methane and methane-like compounds on Mars, and then of water on Mars – a lot of it. This excited anew the debate on whether Mars harbors life, or was an origin of life. At least one scientist, after reading the reports, makes a remarkable suggestion: yes, Mars might harbor life. If it does, that life did not spring forth from Mars. Instead, that life, and the water, might have come from earth – and not as recent contaminants, either.

The Curiosity rover and why it is so important

The Curiosity rover landed on Mars on August 6, 2012. That in itself excited the world, as it should have. The Mars Science Laboratory (the formal name of the Curiosity rover) is the heaviest, most sophisticated, and the most delicate instrument ever to land on Mars. It carries several different types of camera, plus a compact sample analyzer that can measure very small amounts of whatever makes up a sample. The landing needed many different steps. If one step had failed, the Curiosity rover would be a useless pile of junk. But it landed safely. So it gives humanity the best chance to study Mars short of landing a crew on it. (And that kind of project would be far too expensive to lay on only to do geology, or “areology,” on Mars.) 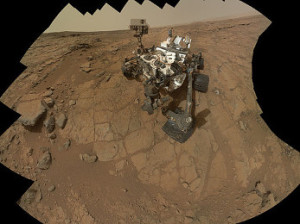 The National Aeronautics and Space Administration (NASA) built and launched the Curiosity rover to help settle, if anyone can, whether Mars has life on it. Scientists have wondered about life on Mars at least since Percival Lovell first looked at Mars through a telescope and described what looked like “channels” on its surface. Lurid visions of an advanced, and even hostile, civilization pleasantly titillated laypeople for decades. Then the first Mariner rocket probes went into orbit around Mars, looked down, didn’t get shot down, and found no sign of civilization, friendly or unfriendly. So scientists decided Mars might have lichens growing on its surface. Thus far, no one has found even that.

The Viking landers found chloromethanes (methyl chloride, methylene chloride) in 1976. But one team decided someone, after cleaning the instruments to pack them for launch, didn’t rinse them properly. (See this article in yesterday’s issue of Science, by Leshin et al., for that detail.) We may assume whoever packed the Curiosity rover for launch did not make that same mistake.

The latest findings from the Curiosity rover

Yesterday, Science published a special issue full of articles on findings by the Curiosity rover. John P. Grotzinger introduced it and summed up the five articles in the special issue:

To read these articles in full, one must subscribe to Science.

The Jake_M rock itself is remarkable. Grotzinger describes it as “a loose rock sitting on the plains.” It stands out because it looks like an Earth rock! To be more specific, it looks and tests like a rock one might find on an island in the Pacific Ocean, or at a continental rift. Stolper, in his article, makes the point more forcefully: now that the Curiosity rover found one such rock, it might find more. Many more.

Jake_M wasn’t exciting enough for the lay press to talk about it. But the findings by Leshin and her team were. The other three articles put those findings into perspective. One needs to consider all of them together to recognize what they imply.

The finding everyone’s talking about is the water. The Curiosity rover sampled windblown sands from a “sand shadow” called Rocknest. The Leshin team found water bound to these sands, varying from about 1.5 to 3 percent by weight. From earlier reports, Leshin infers that this ratio holds all over Mars, not in only one place.

But that’s not all. The Bish and Blake papers show that from a quarter to half those sands are amorphous material. And the water came from those amorphous sands.

Why does this matter? In an exclusive interview, Walter T. Brown pointed out that amorphous sands are more likely to have formed in space, while crystals form where gravity is reasonably strong. If the water comes from the amorphous sands, the water likely came from space.

Hydrogen in all Rocknest samples is highly enriched in deuterium compared to terrestrial materials.

Finally: the Curiosity rover found four different chlorinated compounds: methyl chloride, methylene chloride, chloroform, and chloromethylpropylene. Recall that Viking found the first two, but scientists then thought the cleaning solvents  They can’t lay the blame there now. The Curiosity rover found far more of these compounds this time. More than that, the controllers ran an internal control and found no such compounds in that test.

What these findings mean

The chlorohydrocarbons are a puzzle. The Leshin team can’t settle on where they come from. The Curiosity rover’s instruments also find oxygen and hydrochloride in the same reaction. So the Leshin team speculates that an “oxychloride compound” is reacting with another source of carbon: either from the instruments, or a falling meteoroid, or from Mars itself.

But methyl chloride (monochloromethane) comes naturally from plankton or the salt marsh. Chloroform comes from many seaweeds, algae, and other marine plants. No one has yet found anything like that on Mars. But perhaps extremophiles exist that produce these compounds, and the other two chlorohydrocarbons the Curiosity rover found. If Mars harbors any life forms at all, they would most likely be extremophiles – micro-organisms that live in environments where nothing else can live.

The water findings suggest something so provocative that no one wants to talk about it. Two pieces of evidence stand out. First is that the water comes from amorphous solids, solids that likely formed in space. Second is the deuterium. For one event, about five thousand years ago, produced a large flow, or “flux,” of neutrons through water that likely produced  all that deuterium. That event was the Global Flood.

Dr. Brown explains it this way, beginning here: the “fountains of the great deep” were from a subcrustal ocean. This ocean broke out from a rupture in the earth’s crust. (Today the Mid-Oceanic Ridge marks the path of that rupture.) The tremendous jet of water rushing out through the seam made its edges flutter. And on that scale, that “flutter” produced magnitude-10-to-12 earthquakes. Those earthquakes deformed the abundant quartz in the crust, and produced enough electromotive force to make super-heavy elements. Those elements then split to form the trans-lead elements we know today, from bismuth to uranium and maybe to neptunium and plutonium, too.

All those nuclear reactions released the greatest flux of neutrons the world has ever known. Most of these neutrons flowed into the subcrustal ocean water. This water absorbed the neutrons and changed from the normal H2O to HDO – hydrogen deuterium oxide, or heavy water. (Scientists know of an even rarer and heavier water, D2O.)

An amount of water, rock and mud, together weighing about 5% as much as the moon, shot away from earth in all directions. (The earth never stopped spinning.) The comets hold much of this water. This water also has twice the deuterium one finds in earth’s oceans. Any deuterium-rich water on Mars most likely comes from the same source: either comets that fell to Mars, or some of the same water that came together and froze to make the comets.

If any of this water, with the high proportion of heavy water, held those hardy forms of life we call extremophiles, that could explain the chlorohydrocarbons. Viking first found them, and now the Curiosity rover has found even more of them.

Texas textbooks: the creation side

Kent Hovind: not a tax protester

“In an exclusive interview, Walter T. Brown pointed out that amorphous sands are more likely to have formed in space, while crystals form where gravity is reasonably strong. If the water comes from the amorphous sands, the water likely came from space.”

Okay – on what grounds does he justify this claim? There are a lot of processes that produce amorphous materials – rapid cooling of silicate magmas, chemical reactions of iron with clays, weathering of basalt, etc. Glass is amorphous, and forms just fine under gravity. So do caramel, amber, and toffee, for that matter – they’re amorphous too.

Hey – I’ll give you the same standard answer he does: you think you can knock him off? Go one-on-one directly with him, either on the phone or in writing. He posts his T’s and C’s for such debates for all to see.

The short answer: the solids involve can be either crystalline or amorphous, depending on where they form. Now ask yourself why the water, including the heavy water, confines itself mostly to the amorphous solids. If the water were “native” to Mars, it should be present as much in the crystalline solids as in the amorphous.

“If it does, that life did not spring forth from Mars. Instead, that life, and the water, might have come from earth”

Aha! This is a good one!

I’d obviously be very excited if life – no matter how simple – was found on Mars. It would also be a test for the hydroplate claims. What if life is found and studied, and turns out to be completely unlike anything found on Earth? What if it doesn’t have RNA/DNA and uses some other replicator entirely? Would that change your views at all?

An awful lot of what-ifs. I remember when a particular team tried to claim they had discovered an “ecosystem” that used arsenic in place of sulfur in the amino acids. The environment was a lake heavily laced with arsenic. Well, that didn’t pan out, either. Are your hypotheticals more of the same?

“If the water were “native” to Mars, it should be present as much in the crystalline solids as in the amorphous.”

What is his theoretical underpinning for suggesting that amorphous solids form in microgravity while crystals form under stronger gravity? NASA has been using the microgravity environment to produce well-ordered crystals since Skylab in the 1970’s. It’s perennially one of the applications brought up brought up to foster private-enterprise launch capabilities: purer pharmaceuticals, better semiconductors, etc. because of better crystal formation under microgravity.

Dr. Brown’s entire corpus of work does not need to be debated in order to correct individual erroneous or unsupported statements.

Well, if you think you can knock down his central proposition – and that is what you want to do, isn’t it? – then why not try to debate his entire corpus of work? Besides, the whole idea is that it’s integrated.

“Are your hypotheticals more of the same?”

No, I’d say it’s a reasonable thing to look for if Martian life is discovered. If it uses RNA or DNA for heredity then it’s pretty much certain it came from here, because the chances of independently evolved planetary life using the same molecules are essentially nil. If it uses something different then it originated independently of Earth life. Does that sound reasonable?

“Besides, the whole idea is that it’s integrated.”

It doesn’t matter how integrated it is if fundamental ideas are simply wrong. The idea that crystals need gravity to form is simply wrong.