Remember when de facto President Barack Obama said you could keep your plan? That’s not true. What’s more, Obama lied. He knew it was not true from the start. And he, and his apologists, are now messing with our heads. They are still trying to hide the facts, and blame others for what they did. What they meant to do all along.

Barack Obama sold the Patient Protection (racket!) and Affordable (not!) Care Act, hereafter “Obamacare,” to the public with several promises. If you didn’t have insurance, you could at last get it. But

Period. Not “asterisk: only if we think your plan is good enough.” Period. No. Matter. What.

Barack Obama said that five or more times. He said it on campaign. And until October 1, he said it repeatedly in the endless campaign that are his press conferences. So did his press secretary, responsible officials, and Democratic Members of Congress.

But in mid-September, millions of Americans, who have individual insurance policies, got notices in the mail. The gist: their insurers could not offer those plans anymore. And you can count yours truly among that number.

People all over America are still getting those letters in the mail, or on-line. Why?

Katie Pavlich, at Townhall.com, reported on a White House press briefing by Jay Carney yesterday. He looked like a deer in headlights most of the time. He said one thing of substance: he blamed the insurers. He suggested no insurer had to cancel any plan. He (and others) seem to feel any insurer can offer any plan, on any terms, if they want to. And if they don’t want to, they are being spoilsports.

First, no one in government wants to admit the truth. In fact, the Department of Health and Human Services wrote regulations, in the summer of 2010, to forbid insurers to offer certain plans that people could afford. They now seem to demand, with straight faces, that insurers work at a loss. These government officials can have only two reasons to have this attitude:

But of course, they are not as brazen as was Karl Marx or V. I. Lenin or Josef Stalin. They must hide behind a mask of “business friendship.” (See how the Greeks defined a hypocrite: the man under the mask.)

And of course, insurers did raise premiums a year ago. They did not know what the risk pool would look like. You can lower a price once raised, but you often cannot raise a price once lowered. (Or may not, under the new regulations.)

That refrain comes from many in the media, and also from Members of Congress, and the Obama administration. This morning, Rep. Henry Waxman (D-Calif.) threw in that gem in the House Energy and Commerce Committee. (Kathleen Sebelius is sitting at the green table as I write this.) It goes like this: the plans no longer available, should never have been available. And the government is sure you will like their plan a lot better.

In fact, the law did have a grandfather clause. But: Kathleen Sebelius’ department wrote the regulations that made 40 to 67 percent, and maybe 80 percent, of those plans invalid. See James Taranto’s report, and that of Kevin Glass. Both reports cite a report from NBC News:

The law states that policies in effect as of March 23, 2010 will be “grandfathered,” meaning consumers can keep those policies even though they don’t meet requirements of the new health care law. But the Department of Health and Human Services then wrote regulations that narrowed that provision, by saying that if any part of a policy was significantly changed since that date — the deductible, co-pay, or benefits, for example — the policy would not be grandfathered.

Buried in Obamacare regulations from July 2010 is an estimate that because of normal turnover in the individual insurance market, “40 to 67 percent” of customers will not be able to keep their policy. And because many policies will have been changed since the key date, “the percentage of individual market policies losing grandfather status in a given year exceeds the 40 to 67 percent range.”

So that’s why those plans are not available. The government forbade the insurers by law to offer them. Make one change in a policy, even one to comply with the new rules, and they can’t offer the plan at all.

Did somebody goof? Did somebody, for example, forget to write something in the rules to let the insurers offer the same plan, with changes to conform to law?

No. They didn’t forget.

The Wall Street Journal says it best. Those regulations, and the cancellations that resulted, did not happen by accident. The Obama administration designed it that way. Why? Because if too many people “keep their plans,” Obamacare will always work at a loss. Of course, government always works at a loss. But the government could never handle this kind of loss.

None of this is an accident. It is the deliberate result of the liberal demand that everyone have essentially the same coverage and that government must dictate what that coverage is and how much it costs.

That, of course, is part of the liberal demand that everyone have the same economic result in all things. Obamacare is no different. It is the gateway to a command economy.

Of course, the apologists for government, in and out of the press, did not want people to know that right away. That’s why Obama sold Obamacare with the you-can-keep-your-plan promise, even during his debates with Mitt Romney. Now that they can’t deny that, what have they to say to those who have those letters canceling their plans?

Here’s a gem from SodaHead.com:

If you weren’t such a blockhead, you would go on the exchange and you could find a better plan that costs less.

Maybe whoever posted that to me forgot I lived in New Jersey and faced a Web site that does not work yet. And when it does work, it will have my private business, and is not secure. Recall what John McAfee, of anti-virus fame, called the site “a hacker’s dream.” In fact, said what kind of dream the Obamacare web site is, using language that does not meet CNAV‘s standards of family friendship.

But two evenings ago, Bob Beckel, co-host of The Five, forgot about proper standards. He in effect accused the mothers of those who got the cancellation notices of involvement in prostitution, and suggested the cancelees were their work products! That outburst struck everyone around the table speechless. 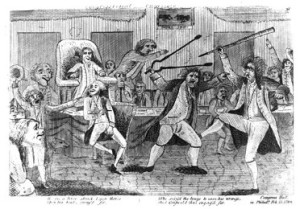 Even that is less outrageous than the scene during yesterday’s hearing before the House Ways and Means Committee. Marilyn Tavenner, head of the Center for Medicare and Medicaid Services, sat at the green table. During his turn to question the witness, Rep. Bill Pascrell (D-N.J.) broke Committee decorum completely. In answer to a Republican’s question, he started roaring and even getting out of his seat. He had accused Republicans of offering no alternatives to Obamacare. Naturally a Republican reminded him that he and others had offered those alternatives. And that was when Pascrell started getting out of his seat as he yelled,

What was Pascrell trying to do? Re-enact this famous scene of more than two hundred years ago?

He in a trice

upon his head, enraged, sir.

Who seized the tongs

To ease his wrongs,

Legislative violence aside, Obamacare suddenly looks less like a promise. It looks more like a policy of tyranny. When its apologists start sneering and roaring at their opponents, the masks have fallen off.

The Obamacare fiasco is worse than that. Those who built Obamacare, moved the goalposts. First they said you could keep your plan. Now they say you’re a fool for wanting your plan. And when they say that they admitted they wanted to force you into Obamacare all the time.

Kathleen Sebelius, whom DO you work for?

[…] last thing yours truly expected was what has unfolded since October […]

Lie of the year | Conservative News and Views

[…] of that: Pants on fire. Meaning that was not only false but blatantly false. But of course, CNAV did not need Politifact.com to tell us […]