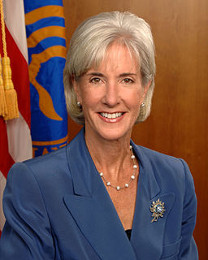 Kathleen Sebelius, Secretary of Health and Human Services, said something interesting last Monday night.  Even Fox News Channel did not notice it then. They should have. She said she does not work for everyone in America. That is, she identified a portion of the American people for whom she does not work. So let’s take her at her word. Whom does she work for, if not all the American people?

Since the October 1 launch of the web site http://healthcare.gov (follow this link at your own risk!), many people in and out of Congress, Republican and Democratic, said Kathleen Sebelius should resign. And they should say that. If the United States government were a private firm, and Kathleen Sebelius’ department had launched a Web site with so many problems, she would have to resign. (And not get any letter of recommendation, either.) She launched a site that, at the time of this writing, still groans under a minimal load, as if it is under a Distributed Denial of Service attack. It rejects usernames, security answers, and other information, on totally specious grounds. It fails to confirm sign-ups by e-mail, as any commercial site does. And for the first time in the modern history of the World Wide Web, developers launched a site that failed the alpha test. Andrew Slavett admitted that to the House Energy and Commerce Committee. And who was the alpha tester? He was.

So after all the failures (though before the hearing that brought the failed alpha test to light), what did Kathleen Sebelius have to say for herself? This! (hat tip: Katie Pavlich at Townhall.com)

The majority of people calling for me to resign I would say are people who I don’t work for and who do not want this program to work in the first place. I have had frequent conversations with the president and I have committed to him that my role is to get the program up and running and we will do just that.

Since when, by the way, does even a company officer lose the authority to say the top boss should fire another officer, just by “not wanting [that officer’s project] to work in the first place”? That’s not how the business world works. But I digress.

Even a private firm knows that it works for its customers. At minimum, the American people are the customers of the government. They might not have wanted that relationship. But now that they’re in it, they have the rights that go along with it. No private firm would ever say it does not work for those who buy its goods or services.

But Kathleen Sebelius went further than that. It’s as if that hypothetical officer at the private firm said he does not work for the firm’s shareholders. All American citizens, having the right to vote, are shareholders of the government. (And some of us are bondholders, too.)

So whom does she now work for? She must mean she works for the de facto President, Members of the Congress in the Democratic Party, and those who voted for Obama in 2008 and 2012 and would vote for him again today if his name appeared on a ballot. Anyone else is an unperson.

Those who watched yesterday’s hearing before the House Energy and Commerce Committee might have thought Frank Pallone’s (D-N.J.) outburst was bad enough.

I will not yield to this monkey court!

he yelled (yes, yelled) to Representative Joe Barton (R-Texas). Mr. Barton only wanted to correct a big mistake Pallone was making. Pallone assumed without warrant that the Web site, with its imperious no-privacy text, did not violate HIPPA. His reasoning: pre-existing conditions or current health state don’t matter to insurability under the law. Wrong on all counts, Barton now says.

But to say that, as a government official, you do not work for all the people, is worse than arrogant. It is dangerous. It suggests those who did not vote for any given President (de jure or de facto) are his subjects, not citizens. A subject pays taxes to support a ruler but may not remove him. That is what Kathleen Sebelius really said. And if Barack Obama still reposes his every confidence in her, he stands by what she said.