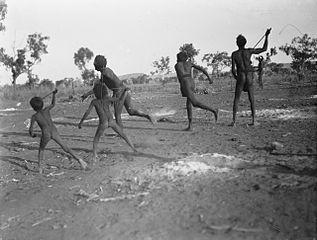 Tomorrow, Bill Nye, “the Science Guy,” will debate Ken Ham before a live audience and a live Internet stream. Subject: whether creationism is “a viable model of origins.” Yesterday a secularist group in Australia released a public broadside against Ken Ham and his current and former associates. In that broadside they suggested the earth cannot be merely six thousand years old. Why? Because indigenous or “aboriginal” peoples have lived on Australia for far longer. Yet the evidence for that long history consists not of historical records, but of inferences from assuming an old earth a priori.

The open letter to Bill Nye

The “open letter” to Bill Nye comes from the Secular Coalition of Australia (SECOA). In its platform or “10-point plan,” this group calls for a frontal assault on religious liberty in Australia. (The headlines of the “ten points” look harmless enough. Slight shadings of the meanings of worlds show the real goal. How, for instance, does SECOA judge the “harm” that “religious practices” do? Would an “anti-discrimination law” force a church to hire, say, a homosexual minister?) SECOA published its “open letter” on February 2. They take a typical polemical tone:

We’re really sorry, Bill – Ken Ham is our fault, and it’s time we took responsibility for him. We, the people of Australia, have allowed our zealots to escape to your fair shores.

SECOA is not a government agency. The laws of Australia do not provide for denying an exit visa to anyone, “zealot” or otherwise. (In fact, Australia is one of the more difficult countries to immigrate to.) In most of this document, SECOA is not advising Bill Nye on how to debate or what scientific points to bring up. Instead they repeat their own goals for making Australia the kind of ultra-secularist society they would like to live in. And in closing, they suggest Bill Nye assault Ken Ham physically.

And if you could manage to kick him in the shins and tell him and his ilk to leave our kids alone, Bill – we’d owe you one.

But they raise one specific scientific issue. This issue relates to how old the Earth can be, and how long certain peoples have lived on Australia. 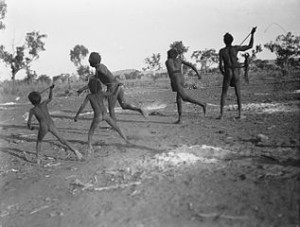 Aboriginal men and boys play a game of gorri, to improve their skill with a throwing spear. Photo: 1922 by Herbert Basedow; National Museum of Australia.

SECOA thinks they can trump creationism, and particularly young-earth creationism. Most young-earth creationists say the earth is 6,000 years old. (They base that on the chronology of Archbishops James Ussher and William Lloyd. One can still find their “Ussher Dates” in the center margins of some copies of the King James Version of the Bible. Your correspondent has one such copy that he inherited from his wife.) And SECOA retorts:

[The] families [of] our Indigenous population…have been here since 50,000 BCE.

Though SECOA asserted that, they did not defend it. Not in the open letter itself, nor in the explanation that followed it. But this is close to the seeming consensus on the history of Australian aboriginal peoples. Wikipedia has the most comprehensive summary of this consensus and the theories behind it. The “Australian History” organization has another summary. Bill Nye gave no hint yesterday of whether he would try to assert the length of aboriginal history tomorrow evening. But if he did, he might want to think twice.

How long have the aborigines lived in Australia?

Why? Because those who assert that aborigines have lived in Australia for 40,000 to 65,000 years, have no continuous historical records to prove it. The “Australian History” site does not even try to prove that; they merely assert it. The Wikipedia article shows what anthropologists rely on: dating methods that assume an old earth. They include radiometric dating (chiefly carbon-14 dating) and thermoluminescence. No one has yet asked Bill Nye what he really thinks about this. But carbon-14 dating is not supposed to be reliable beyond 10,000 years. Or so the critics of Andrew Snelling said, when he published his report about radiometric dating in conflict. How, the critics asked, dared Snelling cite a radiocarbon date of 37,000 years as a good example of the craft? Yet such is the evidence in favor of an aboriginal presence on Australia lasting for 40,000 years at least. Where are the annals to show how long the aborigines really have lived in Australia? No one disputes they “got there first.” The dispute is how many thousands of years passed before the first “transports” arrived. The aborigines themselves do not know. Scientists think they know. But their evidence assumes an old earth. No one claims to have family or village or other annals showing a continuous cultural presence for 40,000 years or longer. No one, in short, claims to have the Australian aboriginal equivalent of the Assyrian Eponym Canon or of Egyptian, Babylonian, Hebrew, or other king lists. (As an aside, SECOA fails to mention that 75 percent of Australian aborigines today adhere to Christianity.) Mark Looy, public relations director for Answers in Genesis, could not be reached for comment. Calls to Answers in Genesis and the Creation Museum, probably from people seeking information on the debate, seem to have jammed their respective switchboards. The Bill Nye-Ken Ham debate will take place Tuesday evening, February 4, 2014, at the Legacy Hall in the Creation Museum. The live stream will be available at the domain debatelive.org. Reprinted from examiner.com. [subscribe2]

My concern is, however, should public schools be teaching creation accounts? Like what teacher or public school district is qualified to do such a thing? Especially the ones with a secular world view? Just because evolution & billions of years are not true doesn’t mean secular folks should be explaining God to our young’ens. And, by which account will be explained? Theistic evolution, intelligent design, a personal creator, which?

You understand, of course, that coming to grips with the Creation narrative would be part of a far more thoroughgoing reform of education in Western societies. Changes of personnel would be elementary.

Yes, sir. But, realistically, the whole nation and its educational system would have to be sacked in order for creationism of any sort to be tought in public-paid schools, if I understand your meaning. Otherwise, who could be trusted to do the teaching of it properly? Further, that is the job of the parents, not public educators, at this day and age. Its just public educators have no place to be teaching evolution myths to our children, as if fact.

Well, now that you mention it…!