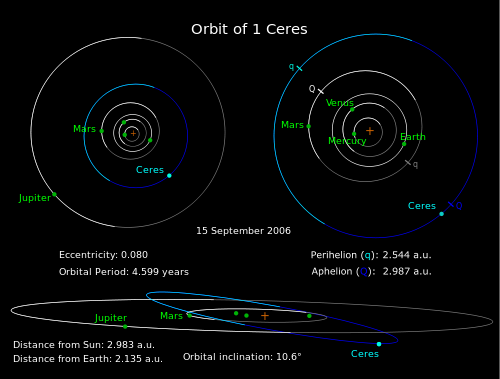 Two days ago, the journal Nature published a shocking report. The dwarf planet Ceres has water vapor on it, and is actively releasing it. This finding confounds conventional notions of the origins of planets, asteroids, meteoroids, and planetary moons. It also vindicates creation, and more particularly the Hydroplate Theory of the Global Flood. The reason: Walter T. Brown Jr., who originated this theory, predicted this finding years ago.

The article by Michael Küppers, Laurence O’Rourke, Dominique Bockelée-Morvan, and ten other investigators, appeared on January 23, 2014 in Nature. (doi: 10.1038/nature12918) The title says it all: “Localized sources of water vapour (sic) on the dwarf planet (1) Ceres.” Nature reserves the full text of this article to subscribers only, or for a one-time fee of $32 US.

According to the abstract, Ceres not only has water vapor on its surface, but is actively producing it. The vapor is gushing out of two distinct “localized sources” in its middle latitudes. Each of those sources produces water at a rate of at least 1026 (one hundred septillion) molecules per second. The total weight of this water: 13.2 U.S. Customary pounds.

Küppers and his colleagues have two guesses for what these sources are:

One has little reason to doubt the finding, or to discount either of these two guesses. The problem: this shouldn’t be happening at all.

NASA’s Hubble Space Telescope took these images of the asteroid 1 Ceres over a 2-hour and 20-minute span, the time it takes the Texas-sized object to complete one quarter of a rotation. NASA, ESA, J. Parker (Southwest Research Institute), P. Thomas (Cornell University), and L. McFadden (University of Maryland)

The diagram illustrates the orbits of Ceres (blue) and several planets (white/grey). The segments of orbits below the ecliptic are plotted in darker colours, and the orange plus sign is the Sun’s location. User Orionist/Wikimedia Commons, CC BY-SA 3.0 Unported License

Cutaway view of asteroid 1 Ceres. Observations of 1 Ceres have revealed that the object may be a “mini planet,” and may contain large amounts of pure water ice beneath its surface. NASA, ESA, and A. Feild (STScI)

Artist’s concept of Dawn space probe, with Vesta (left) and Ceres (right). Not to scale. NASA

By conventional theory, every solar system has a frost line, or a frost “shell,” where temperatures cool to 150 kelvins or colder. (Küppers and company called it a “snowline” in their abstract, as some astronomers do.) Beyond this line, ices of water, ammonia, and methane can form; inside it, such ices should not form.

The frost line of the solar system is at 5 AU. (See here.) Ceres, in its moderately eccentric orbit, never comes close. (It never moves farther away than 3 AU from the sun.) Küppers et al. acknowledge the problem. But they then suggest “some of the icy bodies may have migrated into the asteroid belt.” They cite this article by Walsh et al. Here Walsh proposed that Jupiter dived into the inner solar system, coming as close as 1.5 AU, and then went out. From Walsh’s abstract:

Küppers seems to suggest Ceres was one of those bodies that Jupiter somehow brought into the asteroid belt from farther out. This begs the question of why Ceres should have a moderately (7.5 percent) eccentric orbit.

It also begs the question of how the asteroid belt formed. No one seems to accept the old exploded-planet theory. Martin and Livio proposed in 2012 that asteroid belts should form near their stars’ respective frost lines. They explain our asteroid belt this way:

When Jupiter formed just beyond the snow line, its powerful gravity prevented nearby material inside its orbit from coalescing and building planets. Instead, Jupiter’s influence caused the material to collide and break apart. These fragmented rocks settled into an asteroid belt around the sun.

That isn’t quite consistent with finding water vapor, not only on Ceres but on other objects in the asteroid belt. Walsh’s model seems to require  Jupiter to dive deep into the solar system, then move back out, and somehow settle into its current orbit. Jupiter must have moved fast, to get out in time for Earth to form and for the first life to appear on it.

But a little-appreciated creation scientist has a much simpler explanation. Moreover, he predicted this finding.

Walter T. Brown, Jr. heads the Center for Scientific Creation in Phoenix, Ariz. His book In the Beginning: Compelling Evidence for Creation and the Flood is now in its ninth edition. In it he explains the Global Flood. He also says many celestial bodies are themselves remnants of that extremely violent event. Among these bodies: comets, asteroids, and meteoroids.

The fountains of the great deep launched rocks as well as muddy water. As rocks moved farther from Earth, Earth’s gravity became less significant to them, and the gravity of nearby rocks became increasingly significant. Consequently, many rocks, assisted by their mutual gravity and surrounding clouds of water vapor, merged to become asteroids. Isolated rocks in space are meteoroids. Drag forces caused by water vapor and thrust forces produced by the radiometer effect concentrated asteroids in what is now the asteroid belt. All the so-called “mavericks of the solar system” (asteroids, meteoroids, and comets) resulted from the explosive events at the beginning of the flood.

One of those bodies was heavy enough to collapse on itself and become a sphere. And no wonder: this body accounts for one-third the total mass of the asteroid belt. That body is the dwarf planet Ceres.

In discussing the origin of the asteroids, Brown made this bold prediction:

A deep, penetrating impact on a large asteroid, such as Ceres, will release huge volumes of water vapor. 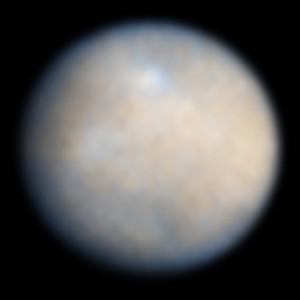 More generally, Brown says all asteroids once had water vapor on their surfaces. But after thousands of years of exposure to the sun, most of the water on the surface has sublimated away. Obviously some object or objects struck Ceres and exposed some of the icy “mantle” of Ceres.

In February of 2015, the robotic rocket probe Dawn should reach Ceres. Maybe Dawn can sample some of this water vapor. If so, perhaps Dawn can test another prediction Brown made:

Water-ice on asteroids will be rich in deuterium.

Why deuterium? Because the tremendous earthquakes that attended the Global Flood produced a sea of neutrons. By deforming the quartz throughout the continental crust, they created breakdown voltages that turned the heavier elements into plasma. In that state, they fused to form super-heavy elements. These rapidly split to form the radioactive elements in the crust today. And in every stage, they released free neutrons. The sub-crustal ocean, before it broke out, absorbed most of these neutrons. This is the source of “heavy hydrogen” and even of radioactive hydrogen (tritium).

Cometary ice is rich in deuterium. If asteroid ice is also deuterium-rich, that suggests the two kinds of bodies came from the same or similar environments. They would have to be high-radiation environments, almost like several neutron bombs going off at once. The continental crust of Earth during the Global Flood would be such an environment. No conventional astronomer has yet suggested any event or environment in space with so many neutrons flowing at once. (Or at least, not for any publication that Brown or this reporter has found.)

Fools no longer conscious of shame