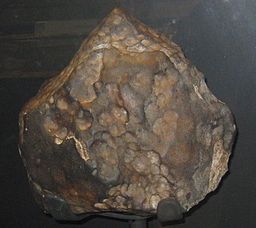 Two days ago, geologists at the University of Alberta spoke publicly about a result years in making. They said they found, on the ground, a mineral others only guessed lies about 320 miles deep. They further said this mineral held water. They published their findings, and a letter explaining them, in the journal Nature.

The lurid headlines rang out almost at once. “Earth has a secret reservoir of water, say scientists!” screamed Agence France-Presse on March 12. The next day (March 13), Reuters had a more sober headline for its story: “Brazilian diamond hints at vast water reserve deep inside Earth.” Today (March 14), Livescience.com (via Fox News Channel) had this headline: “Rare diamond reveals Earth’s interior is all wet.”

Not so fast, says Walter T. Brown of the Center for Scientific Creation in Phoenix, Arizona. First, the mineral is rich in hydroxy groups. That doesn’t make it water-rich. Second, the mineral could as easily have formed during the “compression event” during the breakout of the subcrustal ocean that gave us the Global Flood.

The finding causing all the excitement is a large brown diamond, itself of no commercial value. Brown diamonds are worth the least, and especially when they have flaws. In 2008, “amateur gem hunters,” digging in a shallow river bottom in Brazil, found such a diamond. For unclear reasons, the University of Alberta geologists asked for this diamond. That diamond became a graduate-student project. And the student involved found, in a microscopic flaw, a tiny amount of a rare mineral.

This mineral, a form of olivine, has the name ringwoodite, after Ted Ringwood. Dr. Ringwood supposed that high pressures and temperature in a zone 410 to 660 km deep would produce a form of olivine laden with hydroxyl groups. Since then, astrogeologists have found this mineral in meteorites. This is the first finding of this mineral on earth. For obvious reasons, no one has proposed drilling to such a depth, into the “transition zone” in the earth’s mantle.

Drs. Hans Keppler, D. G. Pearson, and their team cite this as proof positive that this “transition zone” is water-rich. They even say this zone holds more water than all the earth’s oceans combined.

Last night this correspondent sought out Walter T. Brown, originator of the Hydroplate Theory, for his perspective. Brown immediately rejected the notion of a “secret reserve of water.”

This finding, and the hype surrounding it, illustrates the central problem of uniformitarian geologists: where did the Earth get all its water? They simply cannot explain that from the Nebula Theory of the formation of the solar system. There is no reason why the earth should have formed from accretion with all that water. So where does the water come from? It cannot come from comets, because comets have too much deuterium in them.

Brown refers here to a well-known fact about comets: they hold twice the concentration of deuterium, or “heavy hydrogen,” that one finds in the oceans of earth.

Concerning ringwoodite, Brown pointed out the obvious: hydroxyl groups are not the same as bound water molecules. To form such large amounts of water from the hydroxyl groups in the ringwoodite (assuming it really could be found), one would have to add equally large quantities of elemental hydrogen. No one has even thought about where that hydrogen might come from.

Brown’s Hydroplate Theory does mention an analog of the mantle transition zone. He calls it the crossover depth and defines it as that depth below which molten minerals are more dense, rather than less, than their solid states. Such melts drain into the outer core, instead of trying to force their way to the crust.

More to the point, Brown suggests another time this diamond with the microscopic ringwoodite inclusion might have formed. After the subcrustal ocean broke out and washed over the land masses, the continents drifted. (Plate tectonics also says the continents drifted. But the Hydroplate Theory says they drifted much faster.) Toward the end came a compression event that formed the mountain chains we see today. This page gives the details.

Brown adds this word of caution to his fellow creation advocates. They should not connect this finding with the Global Flood. The transition zone, according to conventional theory, lies 320 miles deep. The subcrustal ocean lay ten miles deep to the pre-Flood ground and was 0.75 mile deep on average.

Related Topics:creationevidencegeologyscientific theory
Up Next

Gravitational waves – what they mean

Water deep in mantle? Not so fast | feedreadnews.com