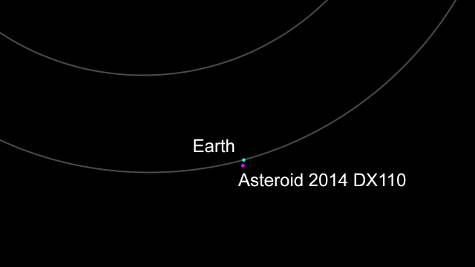 In the last two days, two asteroids have come closer to earth than the moon. These asteroids follow cometary, or highly eccentric, orbits. As such they defy conventional theories of the origins of comets or asteroids. For that reason they lend further credence to another, more radical, yet simpler, explanation. Which is: asteroids and comets formed from material that launched into space during the Global Flood. 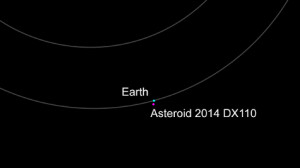 Today saw another pass by an asteroid, this one even closer. Asteroid 2014 EC measures 33 feet wide and came within 55,600 kilometers of earth. (Source: Space.com, reprinted at CBS news. Space.com also has an animation of the asteroid’s orbit.)

Space.com quotes Don Yeomans, manager of the Near-earth Object program at NASA, as saying one should expect such close passes once every two weeks. And in fact, a small asteroid did pass that close to earth two weeks ago.

Where do asteroids come from?

Why do asteroids pass so close to earth, so often? To answer that, one must first understand where they came from. Walter T. Brown, originator of the Hydroplate Theory of the Global Flood, lists three explanations:

Brown spoke to this correspondent today about the latest two near-earth asteroids. The news of Asteroid 2014 EC surprised him, but only mildly: he hadn’t heard the news, but the new finding simply affirms his theory further. He confirmed that the presence of small asteroids, making near passes at earth, and moving in eccentric orbits, militates against the exploded-planet and failed-planet theories. That’s because so many asteroids assuming elliptical orbits, and happening to approach so close to earth, are hard to explain if asteroids were supposed to come from a place 2.8 times as far from the sun as the earth itself.

But Brown threw in a word of caution:

Some of those objects we keep calling asteroids, could be burned-out comets, that have lost all their volatiles and are down to their rocky cores.

That possibility should remind us of another interesting fact:

Since 1981, Earth satellites have photographed tiny spots thought to be small, house-size comets striking and vaporizing in our upper atmosphere. [See Figure 33 on page 42.] On average, these strikes occur at an astonishing rate of one every three seconds! Surprisingly, small comets strike Earth’s atmosphere ten times more frequently in early November than in mid-January—too great a variation to explain if the source of small comets is far from Earth’s orbit.

Brown reminded this correspondent of something else: at the rate they’re falling, small comets should, over 4.5 billion years, have delivered more water to earth than one can find in all the earth’s rivers, lakes, and oceans.

Water deep in mantle? Not so fast

Terry, some of your articles are excellent and attest to the Lord’s purpose. This one, I’m afraid, falls far short of that mark.

First of all, Walt Brown is not a good source for science of any kind. Take his hydroplate theory, for instance. It’s interesting, but when you do the math, it falls short — quite literally — because no earthly process could transmit enough energy to blocks of stone and water to escape Earth’s orbit, much less send massive objects out beyond the major planets.

These highly eccentric orbits do not defy conventional theories. Do you even know what the conventional theories are? Interstellar space is not empty. Rogue planets or planetoids can gravitationally disturb objects in the Solar Oort cloud and send them into interstellar space as new rogues or plummet them toward the inner Solar system, creating long-period comets or asteroids with highly eccentric orbits. This is entirely natural.

These two near-Earth misses do far more to support the conventional theory than they do for Brown’s wild ideas.

I debunk some of Brown’s wild ideas in my new book. It gives me no joy to point out that someone is wrong, but I’ve read Brown’s “In the Beginning…” and it is so full of wildness, I could never recommend his book to anyone. Whatever rigor and acumen he used to get his PhD was lost by the time he wrote his book. Scientifically, it is garbage.

There is only one Truth. God’s Truth. Everything we humans do falls far short of that. Talking about God’s Truth is a good thing. Insisting that we have that Truth all sewed up is not. We need to remain humble and hungry for God’s answers.

If you’re interested in a spirit-filled adventure, check out “The Bible’s Hidden Wisdom, God’s Reason for Noah’s Flood.”
link to amazon.com

Bless you for your continued efforts.

I offer you the same chance Walt Brown offers to anyone who thinks his theory doesn’t add up: make some calculations and shoot them in to him. Now what you have to do first is read his book. And I mean cover-to-cover, because you can never know what insight you might find in it that will show you what you missed.