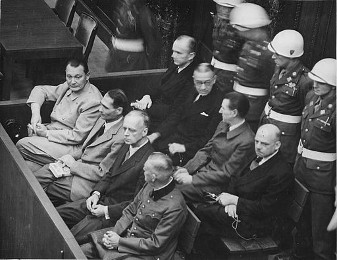 The Laws of God and of man have been violated, and the guilty must not go unpunished.

Interestingly enough, back in 1945, during the Nuremberg Trials, when the war criminals were rounded up by a world tribunal to bring forth justice concerning those who were responsible for the murder of 12 million people (mainly Hitler’s regime), when it was time to answer for their crimes, the accused stated that they were “just doing what they were ordered to do,” regardless if it was legal or illegal, not only in the sight of man, but also before a Just and Holy God (Proverbs 21:3).

The real question here should be: Who were the real criminals? Those who committed the crimes, or those who let them commit the crimes? Imagine with me for a moment if the people in Germany would have dealt with these criminals before their crimes commenced – how different would the outcome have been (Deuteronomy 28:63)?

Let me show you how history is repeating itself right here in America. 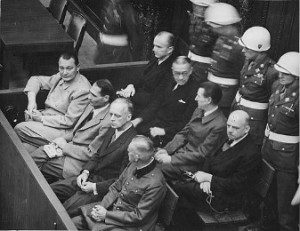 Defendants in the dock at Nuremberg. Photo: Office of the U.S. Chief of Counsel for the Prosecution of Axis Criminality/Still Picture Records LICON, Special Media Archives Services Division (NWCS-S)

When I look across the country, as I do on a daily basis, and see things taking place in America, I can’t help but wonder why we are where we are today and who is to blame for the position that we as a people are in.

First, I know we cannot blame the professed church in America for holding back the Word of the Lord concerning homosexuality, abortion and government corruption because they do not want to offend anyone. After all, while Christ was being delivered up for the guilt (sins) of mankind, it was the religious hypocrites crying, “We have no king but Caesar!” (John 19:15)

We cannot blame the homosexuals who are being used to upend the Constitution of the United States, to make way for Sharia law. After all, that is the way they were born.

We cannot blame the abortionists who murder over 4,000 babies a day across America. After all, it was the Supreme Court of the United States that sanctioned the victims’ murder under the guise of “choice.”

I know that we cannot blame those in government, namely the corrupt politicians who knowingly, at every step of the way, willfully violate the U.S. Constitution, and who on a daily basis trample our rights that hundreds of thousands of our forefathers, grandpas, fathers, uncles, cousins, brothers and sisters have fought, bled and died to give us.

I know that we cannot blame the teachers across the country that teach what they know is illegal, immoral and un-American in our classrooms under every guise: “No Child Left Behind,” “International Baccalaureate” or even “Common Core.” After all, they have to hold onto their jobs.

We certainly cannot blame the 86 percent of the parents who claim they are Christians, patriots, or conservatives and are dropping their children off at school gates to be illegally indoctrinated by the federal government, for they are just doing what everyone else is doing (10th Amendment).

Or what about those in the state-run media who do what they are told regardless of the information broadcast, whether it is true or not? We cannot blame them either, for they are just following orders on what to report.

You know, this mentality sounds all too familiar. The Nazis during the Nuremberg Trials said they were just doing their job, just following orders.

No questions, no moral conviction, no standing against that which violates God and His Laws. Has America taken on the same mentality?

It has been said that:

A nation whose citizens refuse to see and investigate the facts, who refuse to believe that their government and their media will routinely lie to them and fabricate a reality contrary to verifiable facts, is a society that chooses and deserves the police state dictatorship it is going to get.

Tyranny on trial: who is to blame?

So, I ask, who is to blame? The American people who let them do it!

The video below brings forth the message of a prophet:


America needs to learn from history so that history does not repeat itself:


Listen to Bradlee Dean on The Sons of Liberty radio show 6 days a week! (http://www.gcnlive.com/CMS/index.php/showinfo?showCode=39)

I disagree with the idea of “blame,” though. And this is not simply a matter of semantics. Blame is entirely negative. If you want to dish out and rub people’s noses in blame, you follow the teachings of Ego and Satan.

A far more loving stance is one of accepting responsibility. This is what God does. When we accept 100% responsibility for everything, then we become God’s children once again. Why? Because it evokes Holy Spirit. It trashes Ego, because Ego loves blame and hates responsibility.

What is this Ego character? It’s not what western psychologists define it as. It’s more of the Buddhist definition — the false self. Christ described it as that which desires to be “first,” but which will end up being “last.”

The psychopaths about whom you hint — the ones behind the perversions in America — were also behind Hitler and Lenin. I suspect that they may have been behind the resurgence of biblical literalism, too. Think about that for a moment. Perverting Christianity would be a perfect way to cripple the Truth. In scripture, 2 Cor. 3:6 warns against the letter (literal), because it leads to death; only the spirit leads to everlasting life.

And think about that, for a moment. If you consider the idea that there might be wisdom hidden in the Bible, you immediately evoke the Holy Spirit in order to find it. What could be more divine than that? Atheists are biblical literalists; don’t follow their poor example.

One thing that the psychopath globalists seem very good at is divide and conquer. They create false dichotomies, funding both sides and then polarize the public toward those dichotomous ends. This is exactly what Ego is all about. And false dichotomies can never be resolved, because neither terminal is Truth. Conservative-Liberal, Democrat-Republican, Global Warming fans-deniers, science-religion, evolution-creationism, 9/11 conspiracy theorists-debunkers, and many more.

Love brings us together, not apart. And God is love.

[…] night, Bradlee Dean asked who’s to blame for the rise of tyranny in any society. He made an excellent case that those […]

You do realize that Martin Luther King was a Democratic Socialist who worked towards economic justice don’t you? I don’t think his image really belongs on a conservative website.